WATERLOO, Iowa – Amateur and professional wrestling have always been intertwined for the men behind American Alpha, and their appearance at the George Tragos/Lou Thesz Professional Wrestling Hall of Fame weekend brought the connection full circle.

Both Chad Gable and Jason Jordan grew up looking to make their mark in professional wrestling, and ultimately took a path through the amateur ranks to make those dreams a reality. Gable, real name Chas Betts, won his first children’s national championship in Waterloo, Iowa, home of the National Wrestling Hall of Fame Dan Gable Museum.

“I’ve been to the museum many times,” Gable said in between autograph signings at Friday’s Impact Pro Wrestling show. “I’ve done clinics, amateur wrestling clinics in the museum, and so up to this point, I’ve just only known it [through] my amateur [career].”

“Now I get to come back and it’s like, I’m a part of this whole new section and wing of it, and it’s really neat,” Gable said. “Very few people get to do that, and I just feel very honored to be a part of that.”

Jordan, a three-time, Division I NCAA national qualifier, said the way the museum melds amateur and professional wrestling is “incredible.”

“I think that their used to be this stigma of amateur wrestlers transitioning to professional wrestling,” Jordan said. “I think that the museum helps eliminate any of that.” 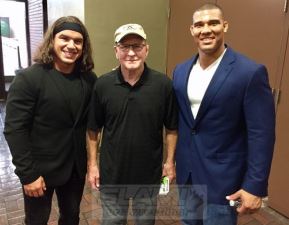 And the recent change in Jordan’s career — his reveal as Kurt Angle’s long-lost son, transition to the RAW brand and subsequent split from Gable — connects to the museum as well, as Angle was inducted into the Tragos/Thesz Pro Wrestling Hall of Fame in 2012. While in Waterloo, American Alpha visited the museum, making a point to pose for a photo opportunity in front of the Rob Schamberger mural that prominently displays Jordan’s “father.”

“I think that it would do a lot of honor to our tag team for me to have a successful singles career. So, first of all, just getting things going, it’s going to be a big adjustment, picking up some wins. But from there, I would love to keep the gold in the blood,” Jordan said with a laugh.

Noting the history of negative attitudes when amateur wrestlers cross over to the professional ranks, Jordan said, the museum “makes that so much easier.”

“It makes that an amazing opportunity for amateur wrestlers to continue on after,” Jordan said. “I think it excels and transcends the sport of wrestling, period.”

The museum — and its namesake — has an extra connection for Gable, who had a childhood hero’s surname bestowed upon him in WWE NXT, though Chad Gable said he did not petition to take on a name of that stature.

“I didn’t want to give a name to myself like Gable or like Angle — one of these legendary amateur wrestling names,” Gable said. “Even though I wrestled in the Olympics, I never won a gold medal like these guys, I didn’t feel like I deserve that.”

But when Chad Gable was approached with taking on the legendary name, “it just popped.”

“It just made perfect sense,” Gable said. “It sounded great, and I said, I’ll go with it.'”

“It’s like, ‘Thank God, I got his seal of approval,'” Gable recalled, “and that’s really cool because he’s a big supporter too and he’s been one of my favorite wrestlers since I was a little kid.”

EDITOR’S NOTE: Look for more from our interviews with Gable and Jordan in the coming days.