The George Tragos/Lou Thesz Professional Wrestling Hall of Fame has booked itself a Dusty Finish for July’s induction weekend, and though “The American Dream” Dusty Rhodes won’t be there, having passed away in 2015, one of his prized proteges will be. 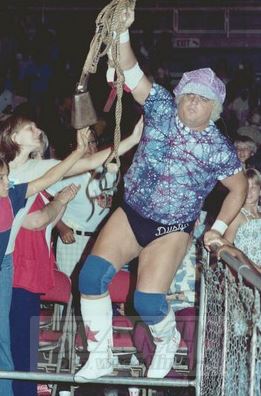 Being inducted into the Tragos/Thesz hall, which is a part of the National Wrestling Hall of Fame Dan Gable Museum in Waterloo, Iowa, are Rhodes and Paul “Mr. Wonderful” Orndorff.

While Orndorff has plenty of ties to the megastar Rhodes, having started out in Florida and served under Rhodes’ booking pen on more than one occasion, it’s the newly-named Lou Thesz World Heavyweight Championship Award going to Magnum T.A. (Terry Allen) that evokes the most connections to the Dream.

When Rhodes was booking Jim Crockett Promotions, it was Magnum T.A. who was his rising star, seemingly destined for the top rung as NWA World champion, but a car crash in October 1986 ended that plan. Though Magnum never wrestled again, he did make appearances, worked in the wrestling office, and made a life for himself. The award, formerly named the briefer Lou Thesz Award, is given to someone in wrestling “who has taken the skills of the sport into the realm of public service.” His perseverance to carry on is part of the reason he is receiving the honour.

Orndorff made his wrestling debut in 1976 after a successful football career. While he worked in many promotions, it’s the WWF with which he is most associated, especially for appearing in the main event of the first WrestleMania, teaming with Roddy Piper against Hulk Hogan and Mr. T.

As for Rhodes, he debuted in 1967 after playing football, and his legacy speaks for itself, including three runs as NWA World champion. He became a powerbroker behind the scenes with Crockett and then World Championship Wrestling, and later influenced many young talents, whether working in ECW, TNA or NXT.

The Frank Gotch Award goes to a wrestler “who, through their athleticism and toughness in the ring, brought a higher level of respect to professional wrestling from both inside and outside the business.” This year, Stan “The Lariat” Hansen will be getting the award. Like Rhodes and Orndorff, Hansen had a football background before getting into pro wrestling. In a career that spanned more than 30 years, he went from main eventing in Shea Stadium in New York against Bruno Sammartino to AWA World champion, with an incredible run in Japan being his unforgettable calling card.

Mike Van Arsdale will receive the George Tragos Award, which is given to an exceptionally competitive wrestler who adapted his wrestling skills and competitive nature to excel in Mixed Martial Arts. He’s a three-time All-American, an NCAA champion in 1988 for Iowa State, and a freestyle World Cup champion in 1997. During his MMA career, from 1998-2006, Van Arsdale went 8-5.

The Jim Melby Award for excellence in professional wrestling writing or historical preservation goes to the late Scott Williams, who died in August 2016. He co-authored the autobiographies of Bill Watts, Terry Funk, and Hacksaw Jim Duggan, and wrote the book Hardcore History: The Extremely Unauthorized Story of ECW. By day, Williams was a court reporter in Texas, and served his country in the first Gulf War.

“I’m very excited about this year’s induction class,” said Gerry Brisco, 2005 inductee and president of the selection committee, in a press release. “All of this year’s recipients represent the highest standard in our profession. This will be another great weekend for fans and fellow wrestlers to enjoy.”

A new event for 2017 will be the Hall of Fame Classic presented by Impact Pro Wrestling. This one-day tournament takes place on Friday, July 21 at 1 p.m. The finals will take place during the evening professional wrestling show. There will also be a talent evaluation with current WWE scout Gerry Brisco. For more information on how to attend, e-mail Troy Peterson, owner of Impact Pro Wrestling.