CZW’s Tournament of Death more popular than ever

TOWNSEND, Delaware – Maybe it was the “Vice Factor.” That is, the mainstream publicity given to CZW’s annual Tournament of Death event after being the subject of a Vice Media documentary last year. That would help explain why the crowd at the show this past weekend seemed to be significantly larger than any of the others at which this reporter had been in attendance. 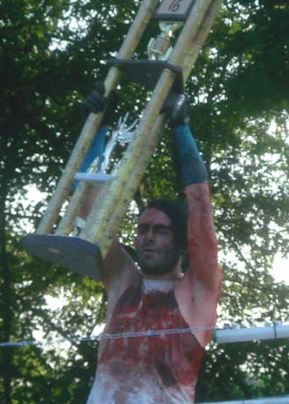 But even if they missed the first gory battle, their bloodlust would soon be sated — and then some — over the course of the next several hours.

There were too many insane moments during the show to list them all here. Not sure words could do them all justice in any case — you kind of have to be there to understand and appreciate the barbaric lengths to which the competitors will go to carve each other up and leave each other wearing the proverbial crimson mask.

This time out, the matches seemed to get even more brutal, and the weapons of destruction even more creative, than in the past. Of course there were tables, chairs, light tubes, barbed wire, panes of glass, and thumbtacks — that’s a given. Other implements included wooden skewers, carpet nail boards, a nail-filled bat, a basket of Megs, cinder blocks, a bed of nails, and a buzzsaw blade on a stick. The piece de resistance, though, may have been a trampoline that had the mat replaced with a web of barbed wire.

That item was used to great effect in the second match of the show, when Clint Margera pushed his opponent Conor Claxton off of the top off of the ring truck that was positioned beside it, and square into the centre of the webbing. Pain met comedy when Claxton bounced about two feet high after the initial impact, receiving a double-dose of the wire, shredding his back open again after coming down from the bounce. 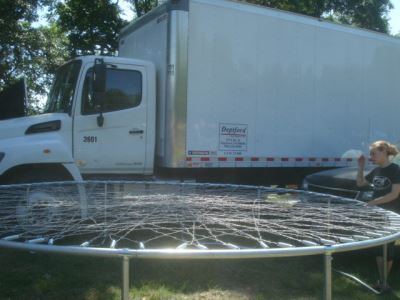 There’s a true art to deathmatch wrestling, and this year’s show included some veritable masters — a couple of modern legends of the game, and some young guns who are looking to grab the barbed-wire-wrapped baton from them and take things to new heights (and then jump off those heights and put someone through a flaming table).

That dynamic was in play for the non-tournament match between veteran star Mad Man Pondo and “Father” Matt Tremont, who has become one of the eminent faces of deathmatch wrestling in North America over the past couple of years. The two of them used everything but the kitchen sink to inflict punishment on each other during their Fans Bring the Weapons match. Pondo hit Tremont in the crotch with a bowling ball. Tremont slammed Pondo onto a sea of Mega Blocks. Pondo sliced Tremont open with a circular saw blade. Tremont slammed Pondo head-first into a garbage pail full of light tubes. It was intense, violent, bloody — everything you could want in a deathmatch and more. In the end, Tremont emerged victorious, gaining momentum for his match on August 5 against the Japanese deathmatch legend, ONITA.

The tournament itself was a mix of up-and-comers and veterans, including MASADA, a deathmatch hero who honed his craft in Big Japan Pro Wrestling and was a three-time past winner of the ToD. Some of the newer faces included G-Raver, John Wayne Murdoch, and SHLAK, whose reputation and popularity is growing with every appearance.

Though popularity is sometimes fleeting, as this year’s winner Jimmy Havoc, a UK star making his ToD debut, found out. Though he was loudly cheered during his first match of the night, a three-way with John Wayne Murdoch and Rickey Shane Page, the crowd celebrated when he was slammed through the barbed wire trampoline in his second round match against MASADA, breaking some of the webbing and getting stuck in the metal thorns. And after he won the tournament by beating Claxton, the crowd showered him with “USA!” chants, going wild with delight when Claxton attacked him after the match and broke the winner’s trophy into pieces. Even the most unlikely fan — a kid sitting in front of me, who couldn’t have been more than six years old — was flipping him the bird.

And while some people may be horrified to hear that people brought their kids to witness the carnage, it’s safe to assume they had just as good a time as the adults, based on the smiles on their faces while watching the matches, or while taking pictures with the stars during the intermission. Pondo made a big deal of finding one little girl a unique weapon to hold up against his forehead for a nice posed shot.

He wasn’t the only one, either. All of the stars were more than happy to pose for photos or sign autographs and thank the fans for being there. And, Vice Effect or not, it’s safe to assume that many of those fans will be back.

For more information on CZW and a list of upcoming shows, including the upcoming rare North American appearance by ONITA, visit czwrestling.com.

Here are some of the photos that I took at the event (note, they are not for the queasy), in no particular order: 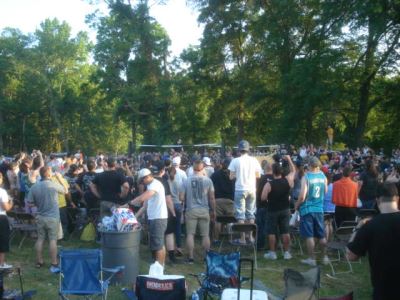 The CZW faithful – much bigger than in prior years . 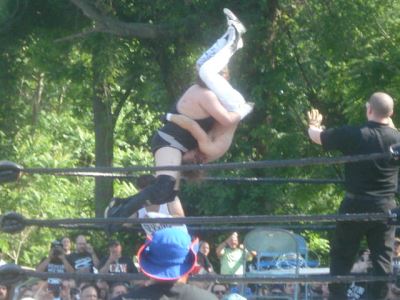 A Canadian Destroyer onto a barbed wire wrapped pane of glass. 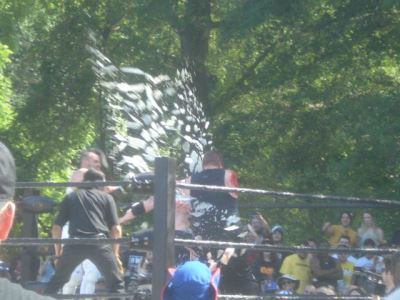 Pain in the Glass match. 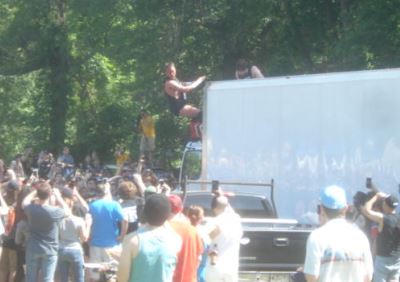 Conor Claxton gets thrown onto the barbed wire trampoline. 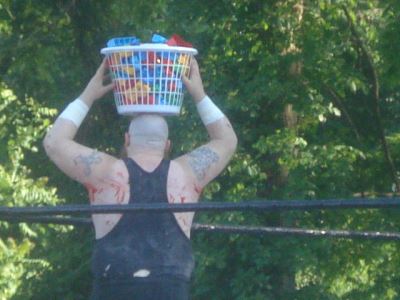 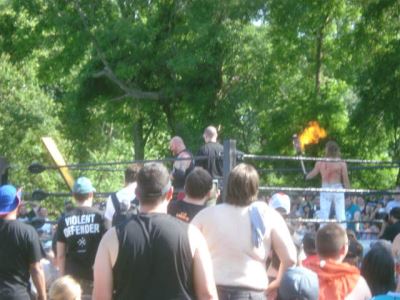 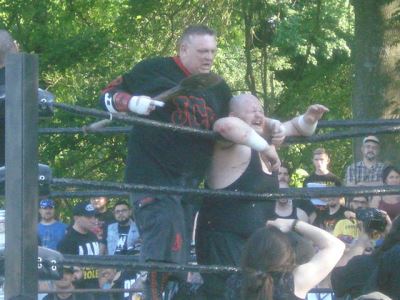 Hanging with Mad Man Pondo is always a slice. 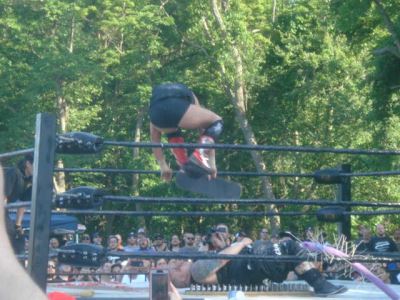 Skateboard assisted stomp onto a bed of nails. 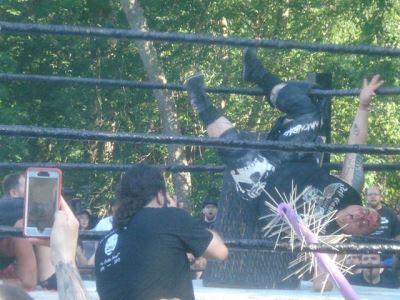 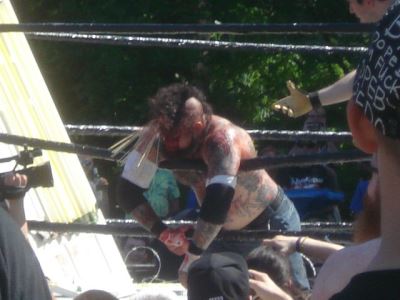 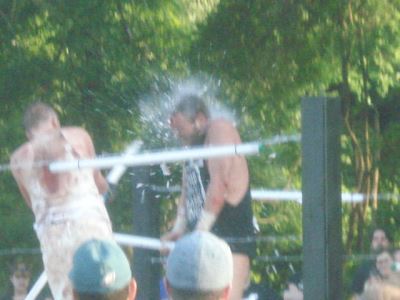 Light tube to the face. 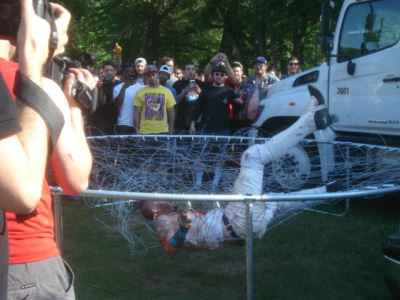 Jimmy Havoc caught up in the web. 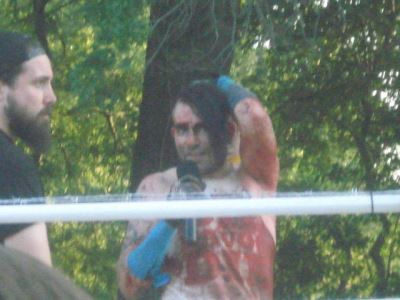 Jimmy Havoc addresses the crowd after his win. 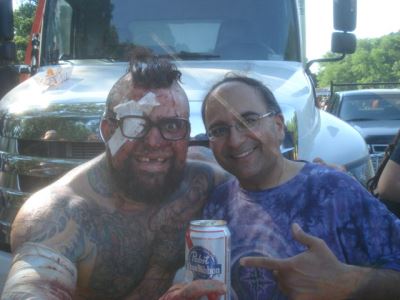