Lucha Underground is a cultural and artistic hit across North America, and recently received a boost with its first two seasons being added to Netflix. That means the stars of lucha libre are not just names that only the hardcore wrestling fans know, but now promoters are scrambling to book these high flyers across the continent. Like Pentagon Jr.

At a recent Empire State Wrestling show in North Tonawanda, New York, SLAM! Wrestling caught up with Pentagon Jr., who is one of Lucha Underground’s biggest stars, and in our best “Spanglish” talked about his career.

Wearing an eerie costume that includes a mask and make-up that looks like a skull, Pentagon Jr.’s spooky white eyes are especially unnerving. With a style that is hard-hitting and acrobatic, the western New York crowd marvelled at his lightning speed. 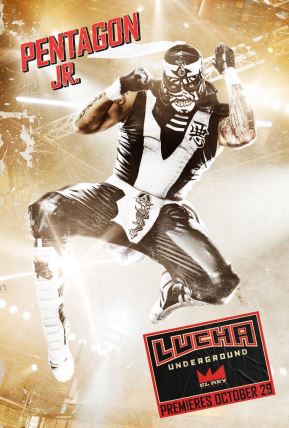 No one was more surprised with the crowd’s excited reaction to the luchador than Pentagon Jr. himself.

Pentagon Jr. was more than pleased that the fans embraced his character in a place that is far from his home, proving that wrestling knows no boundaries. “It was my first time here in Buffalo,” he said. “I think Buffalo, I don’t know the people know Pentagon. I don’t know. Surprise. Tonight ‘Cero Miedo’ wow! That’s wonderful, bro.”

His journey into wrestling started as a youngster in Mexico. One day he found lucha libre on television and fell in love with the sport. It was a fateful day that changed Pentagon Jr.’s life and that of his brother Fenix. “My father call me in the arena in Mexico and I see wrestlers, the magic, the arena, big building,” said Pentagon Jr. “‘Wow.’ I think one day me be a wrestler. Right now is wrestler.”

Like any child, the future wrestler had his favourites. “Fuerza Guerrera, in Mexico, Canek, Mascaras, legends,” said Pentagon Jr. “International, Hayabusa that my idol always. U.S.A., the Ultimate Warrior, me as boy, me see WWF Ultimate Warrior as my favourite.”

Pentagon has been a character in wrestling for Mexico’s AAA promotion for many years. The role has been played by a few different wrestlers. The opposite of Pentagon is the virtuous Octagon. One day AAA decided to freshen up the characters by creating the new junior versions of these iconic roles.

One of the bonuses of working in Lucha Underground is interacting with the legends of lucha. One of those greats who influenced Pentagon Jr. is Vampiro, who is Ian Hodgkinson, an ex-hockey player from Thunder Bay, Ontario. Facing Vampiro in the ring was a thrill for Pentagon Jr.

“Vampiro is number one in the world,” said Pentagon Jr. humbly. “This is matches very strong. I think after this match me is more big because Vampiro is person very important for this business. He helped me much, much, much. He taught me you can, you can. My respect is for Vampiro.”

The success of Lucha Underground, which airs original episodes on El Rey Network in the U.S., and on TeleLatino in Canada, isn’t by chance. Pentagon Jr. felt that the prosperity of the brand is because of the team atmosphere. “Many surprise, the people, Lucha Underground are like family,” said an emotional Pentagon Jr. “All guys as one, the guys, the staff, the cameras, everybody is very good. The people is very, very nice.”

Pentagon Jr. needn’t fear. The wrestling fans of North America know who he is and are thrilled to see the speedy, explosive grappler in action.