It was in June 2010 that I embarked on a quest to write out my personal life story. I had mulled over it for years, after an ex-girlfriend of mine laid the seed in my mind.

“You’ve had a fascinating life. You really should write a book about it.”

Indeed. I’m not exaggerating when I say that I’ve lived a life of which many only dream, both in pro wrestling and also outside of it. I’ve shown more ambition and drive than many a contemporary, which is, in part at least, why I have become the most successful professional wrestler in history out of Northern Europe. My track record and achievements speak for themselves.

In saying this, I thought it only fitting to pen my saga on paper. To leave behind a testimonial of my personal imprint on the wrestling world, especially as it pertains to making history out of the ass-end of the world. 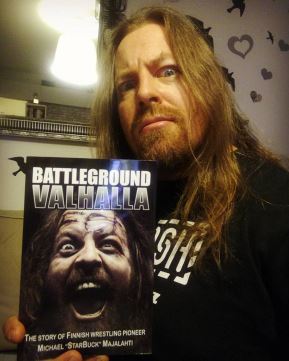 Michael Majalahti shows off his book just after it arrived in Finland.

You see, for 21 years now, I have lived in a country called Finland, which is partially located in the Arctic Circle. I was born and bred in Canada, with three years spent in the U.S., but it was Finland where I found myself in the summer of 1996. It’s literally damn near Siberian climes.

You have to fly out of the country to get to just about anywhere. I don’t have the luxury of joining three other guys and cramming into a car to drive to wherever my next booking might be on European soil. No sir! You have to fly me in, every place I go. And I have to be worth the investment of bringing me in.

Now the wrestling business is a hard playing ground as it is. It’s not just dog-eat-dog, even here in Europe, it’s also plagued with a lack of sponsor money and no television exposure for local promotions. In this way, the biz here is arguably territorial. All the money is more or less made at the gate, with most promotions. It’s hand-to-mouth, for the love of the business. Few make any real money. Most break even or lose money.It is in this climate that I have made my imprint on the wrestling world, in the face of (and despite) these stark and dire realities. I’ve somehow found a way to make it work for me. It hasn’t been easy, trust me. But still, I’ve done alright, all things considered.

These days, especially in the last couple of years, some markets in Europe are actually perking up. It’s a new breed of promoters and younger wrestlers now. It’s the age of the super athlete and the young promoter, who has landed on some serious money and decided to get into the rasslin’ biz. It’s the Internet era, where reality is king and kayfabe is a relic of the past. It’s a different time, and I feel like an old-school dinosaur amidst all this. But dammit, I’m still the legendary T-Rex, not some youthful Raptor.

When I was a kid, I came from the template of “least likely to succeed.” I was the outcast, the preacher’s kid, the Ichabod who always remained on the outside looking in. As I said in my book, from a young age, I aspired to break out of that seeming fate. I wanted to become somebody. And by the grace of God Almighty, along with a little luck, being in the right place at the right time, I managed to achieve that goal through relentless persistence. When no one else believed in me, I chose to still believe in me. Then came the day, when I reached my golden grail of superstardom in my chosen destination of Japan, where creative genius and booker, “The Japanese Buzzsaw” Yoshihiro Tajiri, coined me “The God of Northern Europe.”

So Battleground Valhalla is my testament that all things are possible for those who not only believe, but also tenaciously put one foot in front of the other, in the relentless pursuit of their dream.What I started in June 2010 took five years, almost to the day, to finally finish. I was unforgiving to myself in the pursuit of not only telling an entertaining account of past events, but also finding a befitting, closing sonata to end the book on. The finale presented itself, naturally, in the summer of 2015, when I managed to land a showcase deal for the first-ever Finland vs. Russia pro wrestling showdown in history, with myself representing Finland against the number one export talent out of Russia, Ivan “Locomotive” Markov, for a match to be held in Helsinki. Thus, I was able to end my tome on a historically significant note.

Yet, for all of the chapters that fall in between the beginning and the ending of Battleground Valhalla, you will find a wondrous, tumultuous and trying roller coaster of ups and downs on the road to glory for this sonuvagun. I am more than proud, when I look back on my personal accounts of what I’ve written. There’s enough self-irony to lighten the weightiness. There’s enough entertainment to keep you glued to the pages, with the story being told in a way that enraptures.

A good friend of mine named Mape Ollila, who runs Finland’s leading online metal music website, Imperiumi.net, met my old friend Chris Jericho (who penned the cover plug for my book) when WWE came through Helsinki in 2004. After meeting Y2J, Mape decided to give his book, A Lion’s Tale: Around the World in Spandex, a read. Mind you, Mape is not a wrestling fan, but he loved Jericho’s book. After reading my book, Mape told me that it was equally entertaining in its storytelling as A Lion’s Tale, which really says something, especially considering the fact that Mape is one the most sarcastic, blunt people you will ever meet.So, if you’d like to be enthralled, take a chance and pick up Battleground Valhalla, edited and published by Scott Teal of Crowbar Press. It’s a trip, I guarantee you that. From the literary pen of a prodigal son of Canada, born in Timmins, Ontario, Battleground Valhalla hasn’t been penned by a ghostwriter. I’ve written this baby all by my lonesome. It’s a truly proud moment for not only me, it’s also a victory of sorts for both Northern Europe as well as Canada. Yes, Canada, my homeland. I did you proud.

MICHAEL MAJALAHTI has been wrestling since the 1990s.