Excerpt from ‘Battleground Valhalla’ — “Potato Kick to the Head”

Three days before Friday Nite Rockfight was to take place, my scheduled opponent, Steve Corino, emailed to tell me the World Wrestling Council (WWC, the oldest wrestling office in Puerto Rico) were not going to allow him to leave the country and miss any dates they had scheduled. At the time, Steve was the booker and champion for the WWC. I found myself in a very bad situation because the Finnish media had been peppered with press releases promoting Corino’s upcoming appearance in Finland, at which time he would defend the WWC world championship against me. The plans were to have me win the title and drop it back to Corino the following night in Germany. That historic title had been defended outside of Puerto Rico only one time before [the first time was February 27, 1985 in Bangor, Maine when Dory Funk Jr. defeated Carlos Colón for the strap]. We were prepared to make wrestling history when the bad news hit. 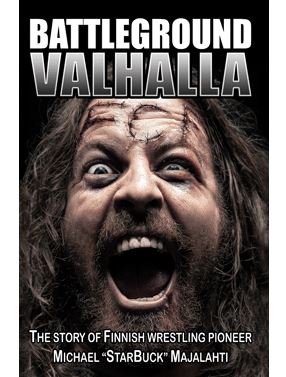 STEVE CORINO tells about the situation:

This situation couldn’t have happened at a more difficult time. My now-ex wife is from Finland. We had separated and she had moved back to Helsinki. I was heartbroken. Then the opportunity to travel to Finland and Germany came up.

I pitched an idea to the WWC office of doing a switch-and-switch of the Universal heavyweight title to StarBuck. With him being the number one babyface in Finland, we would have done great business switching the title. I could lose it in Helsinki, win it back the following night in Germany, and I would return to Puerto Rico with the belt. We would show both matches on the WWC TV show and it would be good for everyone. Carlos Colón loved the idea. We even aired matches of StarBuck on WWC TV for two weeks so Puerto Rico fans would follow the story of StarBuck winning the title.

For me, personally, it was a chance to go to Finland for a few weeks and work on my marriage.

Two days before I was supposed to leave, Victor Jovica came to my apartment and told me I couldn’t leave. The houses in Puerto Rico were down and they needed title matches to get them up. It was the worst news ever. The WWC office already owed me money and they waved a carrot in front of my face by saying I would get the money I was owed that coming weekend.

I never made it to Finland and I didn’t get to do a very cool switch-and- switch with StarBuck for the Universal title.And I never had the opportunity to try and fix my marriage.

My adrenaline shot into overdrive as I scrambled to find a worthy replacement for Corino. I made phone calls and send out quite a few emails in attempt to flush out someone. Bernard Vandamme was an automatic option since he was still the Eurostars European champion, but he was already booked in France that weekend. I also considering bringing in Bjørn Sem, the Norwegian champion, but NWF policy stated that only Norwegian wrestlers could challenge for their belt, and that ruled me out. Booking a noteworthy titleholder only a few days before a show took place was next to impossible since workers of that ilk are booked well in advance.

And then … the “next to impossible” happened. Chris “Bambikiller” Raaber sent me a message through Facebook as he was preparing to leave Europe for WWE’s developmental territory, Florida Championship Wresting. When Chris asked how things were going in Finland, I told him of the predicament I was in. Chris offered to substitute, and since he was still the EWA [European Wrestling Association] world champion, that meant I had one of the top ten wrestlers in Europe in the offering. He told me he wasn’t taking bookings during the month prior to his trip to North America, but he made an exception in our case. Chris’ airfare was very expensive since I had to book it two days before the event, but the bottom line was that the show had been saved. We went on to have a very good match, with Bambikiller ending the bout by pinning me with a powerbomb.

The next night in Brandenburg, Germany, Bambikiller and I went on to have a rematch in an extremely bloody affair that saw me lose more blood than I ever had before in a match. I could feel the pressure dropping in my head as blood cascaded down my forehead and into my eyes, blurring my vision badly. Bambikiller was downright vicious. He intended for this — his final match in Europe before leaving the continent — to be a memorable moment in his career. When I had reached a point where my feet were barely able to carry me, Bambikiller attempted to hoist me up for a slam. I locked him in a rolling cradle and pinned him with a tight small package to win the battle. Truth be told, my crimson coated body looked like a scene out of Mel Gibson’s acclaimed movie, Passion of the Christ. It was downright gruesome.

MICHAEL MAJALAHTI has been wrestling since the 1990s.