Along the Memorial Day Parade route in Lawrenceville, Pittsburgh, PA on Monday, May 29, Bucky Palermo stood alongside his son, Eugene. The duo shared Butler Street with thousands of Pittsburghers. When the Megastars of the Keystone State Wrestling Alliance (KSWA) spotted the longtime referee and his son the valet, they left the parade route to visit the Hall of Famer, Class of 2013. Palermo greeted each of the wrestlers and staffers with the same glee he always had. 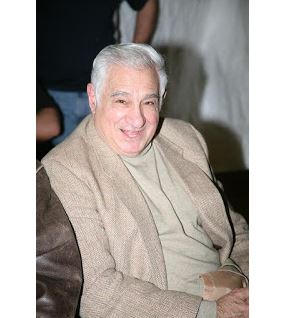 Bucky Palermo at KSWA FanFest in 2013.

Two days later, Palermo took a fall and hit his head. The tough Palermo shook it off. Later he complained of headaches. Friends say he blacked out. Doctors found bleeding on the brain. Palermo went to Hospice. His family was hoping for a miracle.

Palermo officially retired from his legendary Lawrenceville shoe shop in 2015. The occasion was chronicled in Pittsburgh Magazine. He enjoyed retirement by keeping the same busy schedule he always had. With Eugene and other family by his side, Palermo unfortunately buried his wife Kathleen, just last year after a long illness.

Palermo fixed shoes for most of the athletes in town during his career (he started out as a shoe shine boy at 10). He also served as one of the most well-known referees in Studio Wrestling, as well as house shows throughout Western Pennsylvania. Local wrestling historian Hank Hudson posts Bruno Sammartino-era wrestling results on Facebook daily. It’s hard to find an event from those days in which Bucky wasn’t calling it “down the middle.”

At a FanFest in December 2013 Palermo was inducted into the KSWA Hall of Fame. He joined George “The Animal” Steele, “Luscious” Johnny Valiant, and KSWA original “Mr. Tenacity” Tommy Faime to make up that year’s class. In 2016, Eugene Palermo joined his father as the only second-generation KSWA Hall of Famer. 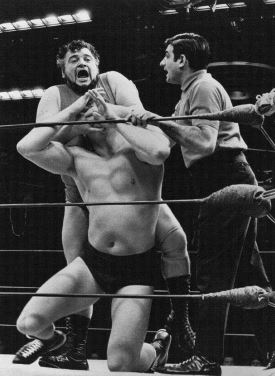 Just last summer, Palermo packed the Carnegie Library of Lawrenceville branch for a discussion about his life and career. “It was my job to upset the fans,” he told the eager crowd. “I did it well for a long time.” In fact, he was a professional wrestling referee for 35 years.

“I can’t find the words to say,” commented KSWA wrestler Shawn Blanchard, who knew Palermo throughout most of his life. “I used to go to his shop as a kid and ask him to get me autographs. That is where I met [hockey star] Paul Coffey.”

“Bucky Palermo was the last of the Studio Wrestling referees,” said Lord Zoltan. “No others are alive today. He was one of those that you thought would never die. He will be missed and was a major player in the history of Pittsburgh professional wrestling, and especially Studio Wrestling. God rest his soul. May he wRESTle in peace.”

The Honky Tonk Man, who wrestled on a number of cards that Palermo officiated, called the referee “a nice guy.”

Funeral arrangements have been completed. Family, friends and fans alive will celebrate Bucky’s life on Friday, June 9 from 1-8 PM at Perman Funeral Home and Cremation Services, Inc., 923 Saxonburg Blvd. at Rte. 8, Shaler Township in Pittsburgh’s North Hills. A Mass of Christian Burial will be held at Holy Spirit Parish, Millvale on Saturday at 10 AM. The family respectfully requests donations be made to the Down Syndrome Association of Pittsburgh, 200 Bursca Avenue, Bridgeville PA 15017 or www.dsapgh.org.