Mat Matters: The joy in seeing others succeed

TORONTO – I had plenty of fun at last weekend’s NXT Takeover: Toronto show, and not all of it had to do with the great action in the ring. No, it had more to do with 30 years of covering pro wrestling, and the benefits that come along with that run.

Along for the ride with me were my son, Quinn, and his wrestling-loving buddy Chazz — who actually tied his birthday party into a viewing of WWE SummerSlam at a local theatre.

As we headed into the Air Canada Centre lobby, we immediately ran into SLAM! Wrestling photographer extraordinaire Mike Mastrandrea, and we chatted for a bit.

Entering the arena, I explained to the boys what an over/under line was, and we set the over/under at 10 for the number of people that I would know and stop to say hello to. Well, that didn’t take long to go past 10, and that included media that I knew, some local wrestlers and promoters at the show, and fans. There’s a reward in that, as everyone loves to be acknowledged and remembered, myself included.

Then I got the chance to sit beside the lovely Jade Chung, who I hadn’t seen in a while. We got caught up — I think the last time I actually talked with her in person was when she ran a bar out on the Danforth and hosted a post-Ring of Honor party one night. (The surreal memory from that night was having a conversation with Necro Butcher about kids.) Jade and her buddies were a lively, funny bunch, which always helps the atmosphere too.

There was action in the ring, courtesy NXT, and right from the beginning, it was special.

None of us were all that familiar with the actual NXT wrestlers and the storylines; realistically there is WAY too much pro wrestling on TV, and I don’t see how anybody can have any semblance of a life and keep up. But that doesn’t mean that I wasn’t familiar with many of the wrestlers.

A big part of the fun of going to the indy wrestling shows anywhere, not just in Toronto, is the chance that one of the grapplers might make it big one day. It was the same for me growing up in Kitchener, and going to OHL hockey games with Kitchener Rangers like Paul Coffey and Brian Bellows going on to stellar NHL careers.

My son and I have been to a number of indy shows through the years — in fact, his first favourite wrestler, Brent Banks, was one of the people we said hi to in the crowd, so it was neat to see someone like Rich Swann right off the bat, who we’d witnessed do his funky routine in person with SMASH Wrestling. 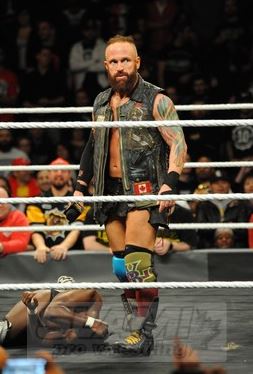 But then Eric Young came out with SAnitY to interrupt the Rich Swann versus Kona Reeves bout, and I was swept up in emotion. Here was this guy that I met way back around 1997 in the Hart Brothers Wrestling School in Cambridge, Ontario, run by the memorable-for-all-the-wrong reasons Ike Shaw. When he won the TNA World title, I made sure to get an interview with Eric for SLAM! Wrestling; though he made the journey himself, a little part of me did too.

That same feeling came up a few more times as the show went along. I first interviewed Aliyah after she was a Toronto Sun SUNshine Girl/wrestler, and here she was in the ACC, her family screaming for her a few rows behind us.

Bobby Roode was trained by Sean Morley (Val Venis) and Shane Sewell, who were trained themselves by the father-son duo of Dewey “The Missing Link” Robertson and Jason Sterling, and since my wife worked with Dewey on his autobiography, there was a feeling that I’d been a part of that glorious journey too. Plus when we first wrote about “Bobby Rude” here in 2001, he was an up-and-coming star in the Maritimes, so we picked well with that story.

Likewise, Tye Dillinger is a kid that I saw wrestle a ton of times when he was Shawn Spears. During his first go-round with WWE — the video NXT ran on him and his various attempts to move up the ladder was very well done and an acknowledgement of how it’s more than just talent that gets someone through — he coyly declined an interview talking about leaving for the big time. Perhaps he knew that it would be a bumpy ride?

There are plenty of others on the show that I’d interviewed or met through the years, like Mickie James, Paul Ellering and Samoa Joe, but I did make a note that it was odd being at a show where there were so many that I have never, ever seen live before (Authors of Pain, The Revival, Asuka, TM 61). 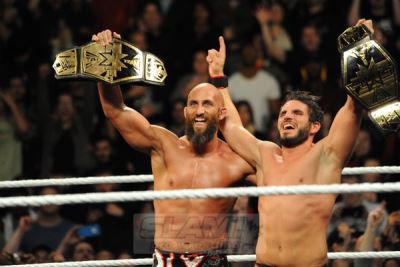 But I’ll leave the last huzzah for #DIY, Johnny Gargano and Tommaso Ciampa, who not only had the match of the night, beating Scott Dawson and Dash Wilder in a best-of-three falls bout for the NXT tag titles, but they also showed such passion and excitement at the win (as babyfaces should) that it felt like we, as a crowd, helped propel them to the victory.

That’s some magic right there. And since I’ve gotten to know Johnny a little over the years — he once wrote a guest column for the site — I will say that his victory is one more feather in the cap of Cleveland’s sporting year, which has included a Calder Cup (Lake Eric Monsters), an NBA title (Cavaliers), World Series finalists (Indians). Now, if it was only possible for our beloved Browns to get a win too …