There’s a Tex, an Axe, a Dragon, and Sputnik, plus someone who was Dirty, one who claims to be Handsome, and another who is the Heartbreak Kid — and let’s not forget Mrs. Foley’s Little Boy. Meet the Class of 2017 for the Professional Wrestling Hall of Fame.

The names were announced on Sunday evening, co-incidentally the birthday of PWHF Board President Cowboy Johnny Mantell, on the NBC affiliate in the home of the PWHF, Wichita Falls, Texas. This is the first induction class run by the Texas-based Hall, after 15 years of the hall of fame being located in New York State.

There are 10 names entering the Hall of Fame in seven different categories: 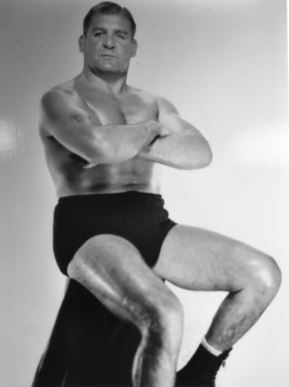 Yvon Robert was the biggest ever star from Quebec. Photo by Tony Lanza

Yvon Robert is by far the biggest professional wrestler ever to come out of Quebec. He was a two-time world champion in a lengthy career. Like Gorgeous George in the United States and Whipper Billy Watson in the rest of Canada, his ascendancy had a lot to do with the early days of television. Handsome and polished, he proved to be the equivalent of Maurice “The Rocket” Richard in hockey. Robert was also a part-owner of the Grand Prix Wrestling promotion, and his son, Yvon Jr., also wrestled.

“Dirty” Dick Raines, originally from Muskogee, Okla., was a top villain for three decades. After starting to wrestle at the age of 19 in Los Angeles, he honed his character. Weighing in at 240-250 pounds, with garb that looked like he just dismounted his steed, Raines was the first, great, scufflin’ Texas cowboy. In retirement, he became a referee in Texas and promoted in Waco.

In a different era, Luther Lindsay probably would have been a world champion. Talented, with a chiseled physique and shooting skills to boot, Luther Jacob Goodall had to find places where being African-American was less of an impedement to becoming a pro wrestling star, like the Pacific Northwest rather than his native Virginia. As the years progressed, Lindsay pioneered areas, including integrating a number of towns in Texas.

Sputnik Monroe was easily one of the most memorable characters ever in pro wrestling, a far cry from Roscoe Monroe Brumbaugh of Dodge City, Kansas. He cultivated an image as a wild, unpredictable brawler, a truly vile and hated villain, particularly when “The Sweet Man” starred in the Memphis territory. Of note there, Monroe became a hero to the African-American crowd for helping to bring down barriers and integrate arenas.

When Larry Hennig & Harley Race were on top in the AWA (derisively called the “Dolly Sisters”), Larry was “Pretty Boy” and Harley was “Handsome.” While both went onto stardom as singles, Larry as “The Axe” and Harley as a seven-time NWA World champion and as the “King” in the WWF, for a time they were among the greatest tag teams ever, winning the championships in the Minneapolis-based promotion and setting a high standard during their 1964 to 1969 run.

Mick Foley is being inducted under his real name, but he made an impact under other names too, including Cactus Jack Foley, Mankind, and Dude Love, but he was always “Mrs. Foley’s Little Boy.” He pioneered the hardcore style in North America, bringing back much of the wildness that he learned in Japan, and was a star wherever he wrestled, including multiple runs as a world champion. He later became a bestselling author, laying the track for the many, many books that have since come out following the success of Have a Nice Day.

Shawn Michaels went from being a tag team wrestler on the smallish side in the Midnight Rockers in the mid-1980s to an arrogant singles star. Many consider him the best in-ring worker of the past 20 years, never failing to perform when the stakes were highest — there’s a reason that “The Heartbreak Kid” is called “Mr. WrestleMania” as well.

Tatsumi Fujinami became one of the biggest stars in the history of Japanese pro wrestling not long after debuting at the age of 17. He’s most associated with New Japan Pro Wrestling, where he was a six-time IWGP champion among many title runs; he was also president of the company for a time. “The Dragon” made many trips to North America, including holding the WWWF’s Junior Heavyweight Championship, and working for WCW.

Susan Green began training when she was just 14, under the tutelage of Joe Blanchard and Floyd Emerson of San Antonio, Texas, so she came by her nickname “Tex” honestly. At six-foot, Green was tall for the time in the women’s wrestling game, and her skills took her around the world.

George Napolitano is still one of the world’s premiere wrestling photographers. The native of New York City has shot far more than wrestling over the years, though, including many celebrity events. He has also edited and written for wrestling magazines and books.

The inductees are voted in by a committee that includes living past Hall of Fame Inductees plus 20 other historians and wrestling legends (including this writer). According to K Downs, the wife of Mantell and the heart and soul behind the day to day running of the PWHF, this year marked the most ballots ever returned to be counted, and included two very, very close votes in the Colleague and Tag Team divisions.

The PWHF moved to Wichita Falls from Amsterdam, NY, in the spring and opened its doors just before WrestleMania in Dallas. Mantell said that everything is progressing for further growth, including more corporate sponsors and the opening of a second floor of exhibits. “Things are all positive now,” he said.

There is a full slate of events set for the induction weekend, May 18-20, 2017, including a comedy show on the Thursday, a wrestling show on the Friday, and a meet and greet with current and past inductees on the Saturday prior to the banquet.