By JEFF WHITE — For SLAM! Wrestling

Watching Bobby Rude hold court in the squared circle at Exhibition Park in Halifax, you would come by the honest assumption that a path to wrestling success was predestined.

He struts to the ring with the pomp and circumstance of Ric Flair, grabs the mike, and proceeds to cut promos with the same ease and style that the great ones do. The driving rain of boos and insults that greet him, along with some scattered cheers, give him extra stride in his step as he gets just what he’s looking for from the crowd. 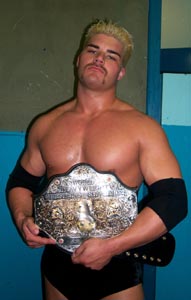 Real Action Wrestling promoter Warren Olsen gained a deeper realization of Rude’s ability as a performer during a stop in Port Hawkesbury for the company’s 2001 Spring Showdown Tour. “Bobby was standing in the ring cutting a promo and the heat that was coming back from the crowd was so loud you could hardly hear him on the mike. We had the sound cranked but still you could hardly make him out. I was trying to find someway to boost the sound”, he laughed.

His in-ring performance has turned out to be as impressive as his mic skills. Rude is the reigning R.A.W. heavyweight champion and along with “Kowboy” Mike Hughes and Kingman has formed the “Kardinal Sinners”, a union of the most dominant heels in the promotion. Olsen feels he has the potential to go all the way.

Ironically though, at 6’0″ and 230 pounds, Rude didn’t feel he was particularly cut out to become a wrestler. “I was always into it growing up, but thought I was too short and not big enough. But when I got into it, they both told me I was a natural at it.”

The “they” he refers to consists of Sean Morley (Val Venis in the WWF) and Shane Sewell, who both hail from Rude’s hometown of Peterborough, Ontario. “Sean had a ring set up in his backyard.I would watch what he did and then do bumps and practice. Then a year later Shane took a year off from wrestling and he trained me on the weekends and got me booked in my first match. I was able to pick it up fairly quickly.” 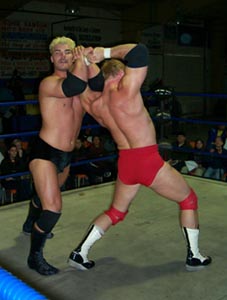 After four years in the business, and at only 25 years of age, Rude has worked for a host of promotions in Ontario and Quebec such as the HWF, ICW, and AWF. He also spent some time in Puerto Rico working for the WWC under the legendary Carlos Colon. He arrived in the Maritimes earlier this year to work for Emile Dupre’s Grand Prix Wrestling, where he began as a babyface. It was at this point that he picked up the nickname of “The Natural” and made the transition to being a heel upon entering the R.A.W. promotion. He calls his heel gimmick a cross between Ric Flair and Curt Hennig, two wrestlers that Rude idolized growing up. “It’s definitely getting over and I really like being a heel. It’s fun,” he admitted.

One of the big reasons for his admiration of Flair and Hennig was their use of ring psychology, which Rude considers a major facet of his own game as well. “I was taught that way, when I first broke into the sport, and I really don’t know any other way”, he said. “When you’re working every single night, you can’t be doing big moves every single night. And if you’re doing a 20-25 minute match, you can’t always be doing a lot of big moves. That’s why ring psychology is so important to me. It keeps the fans with you through the match and keeps them in it.”

Rude appreciates the opportunities he’s been afforded, such as the opportunity to be the top man in R.A.W. for the time being. He says it’s only more of an incentive to work harder. “It’s great to be appreciated and it makes me want to try harder knowing that they are relying on me, in a way.”

Growing up in Peterborough, Rude (spelled “Roode”) played hockey and football in high school. He had originally intended to pursue a career as a corrections officer but made the decision to pursue a wrestling career. He says the support of his family has made the grueling travel and grind of the ring more worthwhile. “My mom thinks I’m getting hurt all the time but my dad likes to come to the matches when I wrestle in Ontario. They know I love it, though, and they’re pretty proud of me.”

As for the future, Rude is looking forward to July when he will wrestle a pair of tryout matches with the WWF in Buffalo and Pittsburgh. “I did tryout with them already in March and it was a bit of a shock,” he said. “The matches I had (both with Perry Saturn) went well, but I wasn’t really prepared for it.” He nods his head and vowed “This time I’m ready to make a real impression.”

For the here and now, Rude is enjoying his reign as R.A.W. champion and enjoys being the man the fans love to hate. But in the back of his mind he is preparing for the future, and a “Rude Awakening” for the wrestling world at large.