On Tuesday, Michelle Starr left Vancouver for his fifth tour of Korea with the WWA. Pretty good work if you can get it, especially because his involvement in the tour came about almost by accident.

Like almost every other Canadian who has been to Korea to wrestle over the past year, Starr owes a debt of gratitude to world traveller extraordinaire, Winnipeg’s Rick Patterson, aka Leatherface. Patterson has been talking up his countrymen and women to WWA booker Rafael Rodriguez Moreno Jr., better known to international fans as Leatherface’s long-time partner in crime Jason the Terrible. 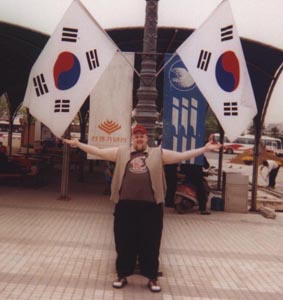 Starr (Mark Vellios) recalled how he first got involved for SLAM! Wrestling. “The first time I got in, it was kind of a fluke. They were running this big anniversary show in Seoul. It was supposed to be One Man Gang versus Lee Wang-Poe, the champion there. And Lou Thesz was there doing the presentation of this new title belt, a new WWA belt. One Man Gang had a heart attack or something and wasn’t able to make the flight. My promotion had had Kurrgan working for us, and they needed a big guy to take One Man Gang’s place. In turn, they brought me and Kurrgan along at the same time.”

The Canadians have generally been doing one-week tours for the WWA. Besides Starr and Kurrgan, other hosers who have made the trip include Steve Wilde, Juggernaut, Buffy Republic, Samantha Slides, and Disco Fury.

As commissioner of the B.C.-based ECCW promotion, Dave Republic has seen some of his wrestlers come back with a better appreciation for wrestling, especially given Korea’s different style. “[They have] more respect for a style of wrestling that does not occur in North America,” Republic said. “There’s a lot of differences in just the stiffness of the style and the reaction of the crowd.”

That reaction from the crowd was definitely a talking point among some of the other Canadians who have been to Korea. “For me it was weird, doing Japan and Korea pretty much at the same time,” said Juggernaut (Craig Renney), who has done two trips to Korea. “Japanese fans tend to sit on their hands, which isn’t a bad thing over there because they’re so interested in what you’re doing they keep it quiet. The Korean fans are similar to a point, unless you can get them going. Actually, Michelle Starr’s character got them going pretty good. They dance around like fools.”

Yes, the transvestite gimmick that Starr has been perfecting over the past decade works in Korea. “It goes over pretty well, actually. It’s a funny thing — I seem to get cheered a bit in The Orient with that gimmick. When I was in Japan, I was cheered a lot with that gimmick as a babyface. In Korea, I’m programmed against Lee Wang-Poe, who is also the boss, so he’s the top babyface in the country. So I’m still booed there, but people still cheer me when I come out,” Starr explained.

Steve Wilde, who runs the Can-Am Wrestling promotion, says that the best part is that the non-Koreans that go over get to work against the top Korean names in the main events. “The first show was in front of about 9,000 people,” Wilde said. “It was loud. I was wrestling the champion and another top Korean in a tag. My partner was Leatherface. Let’s just say due to the finish the crowd started to riot. We left the building with the Korean police holding people back.”

It was a bit of a surreal experience for Buffy Republic (Nicole Jackle), who went to Korea in early May. She worked the entire tour against fellow ECCW wrestler Samantha Slides. The only thing that was different were the surroundings — it was a long way from the familiar surroundings of Eagles Hall in New Westminster.

“It was a good promotion to work for. They treated us excellent,” said Buffy. “Here [in Canada], I think most fans expect women WWF stars, like big breasts. Other there, just being able to wrestle, they were happy to see a women’s wrestling match.”

The fresh faces were welcomed, and after the matches, Buffy said that she and Slides would be swarmed by autograph-seeking kids, who “literally shove papers in your face to sign.” 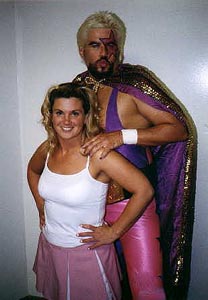 In the ring, the style is different than in North America, according to Juggernaut. “I’m not saying you don’t work as hard. You work differently. It’s more of an old-school style crowd, so you won’t see breaking tables, flying off ladders and stuff over there because they wouldn’t understand it, basically. So it’s more chain-work, stuff like that, more basic stuff.”

On more than one occasion, Buffy said that she and Slides had difficulty with the Korean referee, who didn’t speak much English. “[He’d say] no punchy-punchy. Of course, you try not to laugh.” But wrestlers over time develop a way of working in the ring without words, something that relative newcomers like Buffy and Slides are still working on. “I think they kind of know as you’re wrestling, they’ve done it for so long, it’s just a regular match to them,” Buffy said.

The veteran traveller Starr said that the language barriers work themselves out wherever you are wrestling. “It’s always an issue. If something goes wrong, it could be an issue,” he said. “Some guys do speak a little bit of English, but it’s kind of the same as working in Mexico or Japan even. It’s the same thing, you’ve just got to go with the flow, try to get a lot of it worked out beforehand.”

Outside the ring, it’s easy to get in trouble as well. Starr relied on the advice of Patterson for the proper etiquette in Korea. “Rick showed me a lot of things in Korea, the do’s and the don’ts. What to do and what not to do so you’re not rude or impolite. Taught me how to get around on the trains. They’ve got a great subway system there. You can go anywhere in Seoul on the train.”

Buffy said that the free time to look around was great, but that she didn’t get to see as much as she would have liked to. “They didn’t want us to go off on our own just for safety reasons,” she said. 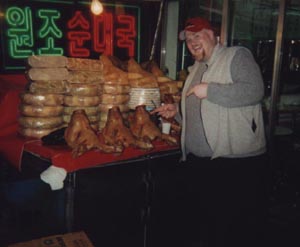 Juggernaut points to some pig heads in Korea.

Juggernaut said that he found a small Internet cafe that charged about a dollar an hour to surf, and that he spent a lot of time there. He simply got tired of being outside. “Korea’s really dirty. It’s like Mexico. … Lots of street vendors … you walk around so long, it feels like you’ve sat in a room full of smoke for six hours because it’s all smoggy and dirty and the cab drivers are crazy and they try to kill you.”

Republic hopes that the goodwill exchange continues with the WWA. It’s good for the Canadian wrestlers because they make a decent wage for a short tour and come back with invaluable experience.

“Obviously not everybody can go, or perhaps even deserves to go,” Republic said. “We’re hoping we can just keep the relationships open so as guys are able, willing, whatever, to go, we can then send them.”