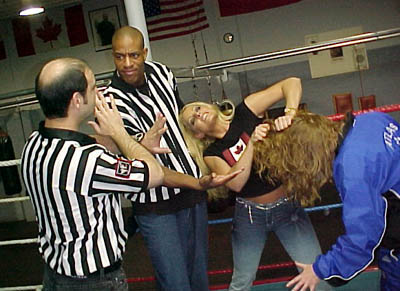 WWF diva Trish Stratus is pumped about being back in Toronto, and is looking forward to making amends with fans at the Air Canada Centre at the show on Saturday.

She’ll be teaming with Jackie to face Molly Holly and Lita in a Femme Fatale match with Toronto Raptor Jerome ‘The Junkyard Dog’ Williams as the special guest referee.

“It’s actually my first time returning as a babyface,” Stratus told SLAM! Wrestling. “Last time I was here, I renounced my Canadian citizenship (laughing), so I won’t be doing that this time! So it should be interesting.”

Stratus turned babyface back at WrestleMania X-Seven in Houston when she turned her back on Vince McMahon. It’s been a bumpy ride for her since then, and she hasn’t had a consistent storyline, and isn’t managing anyone the way she did T&A.

“I think it’s all about character evolution and I think my character’s constantly evolving,” Stratus surmised. “I mean, I’m in that spot as your big heel and I make my babyface turn at WrestleMania. Since then, I haven’t had a consistent storyline but I think that everything I’ve been doing has been character developing.”

Stratus goes on to describe something that was both fun for her to do, and aided her character. “When I did The Worm, that was a different side of me, just dancing.”

In the ring, her skills continue to improve — a necessity considering she hasn’t been wrestling very long at all. “I’ve been doing a lot of wrestling which is going to enhance me as a character and also my skills out there as well. I think it’s all good.”

Recently, Stratus has been hanging out with ‘The Lethal Weapon’ Steve Blackman on screen. It’s a partnership that she’s enjoyed, but that has run it’s course. “I think that’s pretty much done. … A little babyface rub, is what it was. You saw me in a different light. It’s like when you saw Blackman do it for the first time — ‘Oh my God, Blackman’s moonwalking!’ So seeing Trish do The Worm is kind of the same deal. You see me a little different, I think, something you didn’t expect from me.”

She laughed recalling the kendo stick skit she did with Blackman, done in silhouette. “That was just a quick one. It was funny. We were just Austin Powers-esque on that one,” Stratus, crediting the WWF writers for the humour.

With more women wrestlers in the WWF, it means that more pairings are possible. “It creates more ground for us to move around on because when there’s only a couple of us that work, you can’t really intermix too much. So the more women that work, it gives us more opportunities to get out there and actually use the skills that we have,” she said.