Hardys speak out against ‘backyard’ wrestling

On any given night in an arena in North America, two twenty-something brothers will leave a crowd breathless. Their aerial manoeuvres defy gravity; their looks leave girls screaming for more; and their childhood dream has taken them higher than they ever expected.

The brothers are Matt and Jeff Hardy, two of the World Wrestling Federation’s biggest stars. 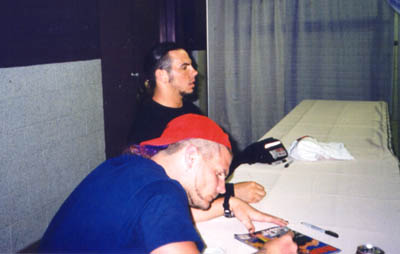 The Hardy Boyz sign autographs at a fan meet and greet before the WWF show at the Winnipeg Arena, June 3, 2001.

The Hardys have given new meaning to the term high-flyers, with their varied assaults, including Matt’s “Twist of Fate”, Jeff’s “Swanton Bomb”, and their combination “Poetry in Motion”. They are four-time WWF Tag Team Champions, and have had a measure of single success as well, with Matt being a past Hardcore and current European champion, and Jeff a former Intercontinental and current Light-Heavyweight champion.

The road to the big time was a long one for the brothers. They began their journey in Cameron, North Carolina, practicing wrestling manoeuvres such as body slams and elbow drops on each other in a makeshift ring. “When we did our ‘backyard wrestling’, we had a trampoline with a ring around it,” Matt told SLAM! Wrestling backstage at Winnipeg’s Arena. “We’d just emulate what we saw on TV.”

While he and Jeff began their training in their backyard, Matt, 26, strongly discourages aspiring wrestlers from taking the same route they did. “If you seriously have a love for the wrestling business, the best thing I recommend is instead of going out in your backyard and hurting yourself, go to a wrestling school and do it the right way,” he said.

It wasn’t long before the brothers began work in the WWF. In 1995, both of the Hardys began doing “jobber” matches for the Connecticut-based federation, putting over other wrestlers on television, mainly in singles competition.

Soon, however, the brothers were put together in a tag team, and were given a “makeover”, which included the inclusion of Michael P.S. Hayes, an idol of the brothers. Matt says that the progression helped their careers. “I think it’s been good because it gave the fans time to learn about us and for us to grow on them,” he says.

The Hardyz quickly rose in the tag team ranks, and on June 29, 1999, the duo won their first Tag Team Championship, defeating the Acolytes (Faarooq and Bradshaw) on Monday Night Raw.

The Hardy Boys have since counted three other tag team championships, along the way etching their names in WWF history. Their battles with Edge and Christian and the Dudley Boyz have left fans awe-struck, following their high-risk manoeuvres. While there is a fear of injury, Jeff, 23, says that the best thing is just to go out and do it. “When you’re at the top of the cage, and you’ve already said your going to do something, and your in front of 10-20,000 people, you’ve got to do it,” he says, adding that hesitating before doing a move can be a cause for injury.

With their popularity rising, Jeff and Matt have a lot of highlight moments in their careers, from winning tag belts, to TLC matches, to working with their friend, Lita (real name Amy Dumas). All of this came through their determination to make their way to the top. “A lot of guys are waiting for that big chance and never get it and get so frustrated and they end up giving up,” Jeff said. “We got that big chance and ran with it.”