Edge and Christian were best buds again on Saturday, hopping in the Toronto Molson Indy pace cars and racing around the track at Exhibition Place. They were having so much fun, it’s easy to forget that the seven-time WWF tag team champs have been bickering on screen.

“People have been saying we’re going to break up for two, three years now,” Edge told SLAM! Wrestling. “We’ve teased it before, and teased it, and that’s really just to get people talking. Right now, I would see us winning an eighth tag team title, and make that record really hard to break.”

When asked about the state of their friendship, which started when both were youngsters in Orangeville, Ontario, Christian pointed to Edge’s E&C T-shirt as proof of their bond.

Edge jumped in with thoughts on their break-up. “We might have to do the old Rockers thing. ‘You got a problem with Edge & Christian?’ and rip the shirt in half. ‘I don’t think so!’ Remember that? The old plate-glass window!”

But who ends up being Marty Jannetty to Shawn Michaels, doomed to an eternity of being in the other’s shadow? “That’ll probably be me because I’ve been holding Edge back as a huge singles star,” deadpanned Christian.

“No, dude, if you go on the Internet, you’re the guy and I’m holding YOU back!” Edge retorted.

“No, no, they’ve been saying it for years. I’ve been holding you back,” Christian confessed.

“Ever since you talked, they’ve changed their minds, brother!” Edge said, boosting his ‘brother’s’ spirits.

On the horizon is the King of the Ring pay-per-view on June 24. Both Edge and Christian are entered in the tournament, and based upon previous KOTR tournaments, a match between the two partners isn’t out of the question. “If we did face each other, you’d get a hell of a match,” Edge said. “But I’d rather face each other in the finals. Ahhh, then you’ve got some story!” 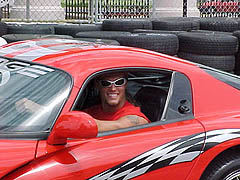 Saturday’s Molson Indy photo opportunity was more about having fun than being WWF superstars. Both Edge and Christian took spins around the Indy track on the pace cars. The dynamic duo were the first in a series of wrestlers to take part in “WWF Invades the Molson Indy,” which will also feature wrestlers Spike Dudley, Molly Holly, Tazz and Bradshaw and Faarooq in appearances before the July 15 race.

While they won’t be able to attend because they will be on the road beating up their opponents, Christian, 27 — whose real name is Jay Reso — is a big fan of the race.

“My father used to be a race car driver. He used to attend races quite often and I would watch them,” he said.

Edge, 27 — whose real name is Adam Copeland — was decked out in his signature cool wraparound sunglasses and a T-shirt with a picture of the tag team in fighting form.

But Edge, whose flamboyant ring actions have made him a fan favourite, had a small confession to make.

“Anything that involves too much speed besides wrestling, I don’t get involved in. I just get in my SUV and feel safe,” Edge said.

Instead of the Indy, the two Canadians have their sights set on another pair of hosers, WWF tag team champs Chris Benoit and Chris Jericho. “I love wrestling those guys. They’re awesome,” Christian said. “I’ve always been a huge fan of both of their work. Benoit is always so intense, like he’s tearing your head off, and he’s hard-hitting. Jericho’s the same way, he’s hard-hitting and a pretty intense guy. That’s the kind of match I like to have. So every time we’ve been in the ring with those guys, we seem to have jelled really good with them, so I look forward to doing more with them.”

Edge explained that their modify their styles to fit their opponents. “We kind of struck on a good formula. When you see us wrestle the Hardys it’s going to be a different match than you’ll see with Benoit and Jericho. We get in there with those guys, it’s going to be dynamic, very hard-hitting. We’re beating the hell out of each other. That’s just the way we like it — good ol’ Canadian boys ‘rasslin. So it’s real fun, and it’s different and fresh for us which is nice. If we could have a run against those guys for the tag straps, that would be a hell of an angle and a feud.”

The other new talent starting in the WWF has them intrigued as well.

“We’ve cut out our teeth with Rhyno. It’s fun teaming with him, but it would also be fun to get in there with him because we’ve both done it before and it works,” Edge said, referring to their time together both in Manitoba and in Detroit. “He’s a hell of a talent and a hell of a person too. Just a good guy that I’m really looking forward to getting in there with.”

“I haven’t seen much of Tajiri, but from what I’ve seen, he’s been impressive,” Christian said. “Spike [Dudley] is awesome. We’ve been in there a few times with him when he first came in, and done some pretty cool stuff with him at WrestleMania. … he brings a lot to the table.”

Can a reunion with Kurt Angle be feasible down the road? Even after he was seemingly banished to the bottom of the barrel on last week’s RAW, seeking help from X-Factor?