In the time before you could start a fan club with the click of a mouse, there were REAL fan clubs, the kinds where the person running it was so passionate, so committed to a single wrestler that they published a newsletter to share with other fans. Often that led to a relationship with their idol. Such was the case of Joe Pottgieser, who died a month ago. He was the world’s leading authority on Ray Stevens.

Like many, I was fortunate to learn of the legacy of “The Crippler” through his principle chronicler through the years, Pottgieser and his Blond Bomber Revue. Not that I subscribed—the publication far pre-dates from beginnings as a fan during the heights of Hulkamania. Instead, it was through the magic of the Internet that we connected and corresponded. 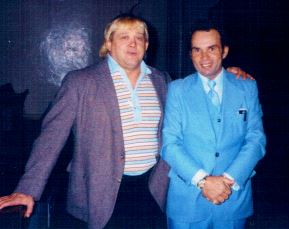 To look at the biography on Ray Stevens in the book, The Pro Wrestling Hall of Fame: The Heels, which I co-wrote with Steven Johnson, is to see Joe’s handiwork throughout. Not only is he quoted, but I know that he helped connect me with some truly outside-the-box people, like world champion cowboy Jack Roddy and racing legend Joe Leonard.

“Ray was able to effect people by just being him,” Joe told me in an email before I spoke with Leonard, for example.

“Ray was like a kid, he liked to play, whether that meant wrestling, racing cars, rodeo or whatever,” he told me another time.

The wrestling-related life of Joe Pottgieser Jr., began in the late 1950s when John Swenski, a former World Junior Heavyweight champion, hired the pesky, persistent youth as an usher at the Civic Auditorium in San Jose, California.

“Being young this was the first of many great opportunities for me. I was able to go on to work in the box office, timekeeper, do publicity and whatever needed to be done, as was the case during those days. I also worked for Northern California promoter Lou Whittson and for Louie Miller, also reported for major wrestling magazines,” wrote Pottgieser in a write-up in a Cauliflower Alley Club newsletter. Swenski and Pottgieser stayed friends, including John teaching Joe’s three sons, Ray (named after Ray Stevens), Patrick (named after Pat Patterson) and Robert, how to golf.

He credited the pro wrestling business for teaching him “most of the lessons and beliefs I have today regarding life, due to the many different people I was able to meet and know.”

Pottgieser’s most rewarding relationship came with Ray Stevens, “who was the same person the first time I met him as he was throughout all the years.”

The Blond Bomber Revue began around 1963, put out by Pottgieser from his San Jose home. The newsletter lists its purpose: “To boost and build up wrestling in general and Ray in particular in every way and every place possible,” and its slogans: “He’s our guy!” and “Rootin’ for Ray.” And don’t forget the club yell: “R-A-Y, R-A-Y, Ray, Ray, He’s Our Guy! S-T-E-V-E-N-S. Stevens, Stevens. He’s The BEST!”

The newsletter was about far more than Stevens, and shared more insider knowledge than magazines of the day, reporting on wrestlers moving territories and changing names for example.

Wrestling isn’t a full-time career for everyone, though, and Pottgieser ended up as a realtor in Huntington Beach. Through his association with Swenski, he kept up with many old friends from the Cauliflower Alley Club luncheons at the Sportsman’s Lodge in Los Angeles and banquets.

“The biggest event over the years has become going to the CAC banquets,” he wrote. “The banquets are now a time again when I can meet and talk in person to old friends like Kinji Shibuya, Red Bastien, Don Manoukian, and always someone I never thought I would have the pleasure seeing in person again.” 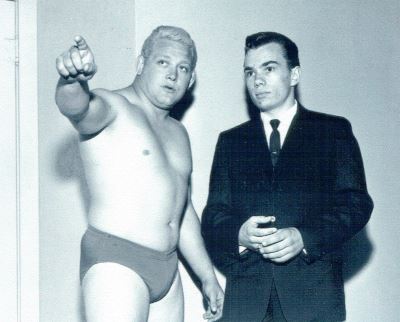 It was at a CAC event in Las Vegas that I met Pottgieser, and was able to say thank you in person for all that he did for me, and for wrestling.

Looking back now, it’s odd that someone who had done such a good job keeping others informed and in touch hadn’t done the same; he wasn’t on Facebook or Twitter, and hadn’t been out to the CAC reunions in years. The news of his death from lung cancer on October 21, 2016, came decidedly out of the blue.

Rest in peace, Joe. I’m guessing that you and Ray have already reconnected.