“I don’t understand it,” exclaimed a fan behind me, repeating this several times to his friend, as others around him either stood in disbelief or cheered jubilantly after Goldberg handily dispatched Brock Lesnar in the main event of Sunday’s show. There were no boos, not yet, but much evident confusion and disbelief over such a quick and decisive match.

The boos only came after the announcement giving thanks to the crowd for attending the show, but in order to fully appreciate the final moments of the night, it’s important to track the wild ride from the beginning.

I arrived plenty early for the show, in part as my son and I were meeting a friend and his son who were also going, and as it was the first live show for both of our kids we wanted to soak in as much atmosphere as possible. Interestingly, my friend wanted to confirm the start time, as his ticket stated 7:30 pm, when he was pretty sure it started at 7:00.

The PPV did, of course, start at 7:00 (my ticket listed a start time of 6:30 to include the pre-show), but his ticket had 7:30 in print. In a very informal survey, I asked some other fans at the Air Canada Centre what their tickets said and many, though not all, did have 7:30 on it, but they were there on time because they knew better.

While not knowing how many tickets had this discrepancy, it seemed to have a slight effect on the arrival of the crowd. There are always stragglers coming in after the start time, but it seemed more pronounced this time, before the full crowd settled in at close to the 7:30 mark.

The great thing about wrestling crowds, though, is that the size is not always indicative of how loud and energetic they’ll be. There were good reactions for the women entering first, most notably for Sasha Banks and, of course, Natalya. This led to a bit of a mixed reaction when Natalya eliminated Banks.

One fan a few rows back was bound and determined to be amazed, trying to start a “Holy sh**” chant on three separate occasions during the women’s match alone. Perhaps it’s time to raise the expectations a bit.

The chanting of “10” every time the ref counts any number, a wrestler lands any number of repeated punches on an opponent, or just general references to Tye Dillinger will quickly become the new “What?” At least Dillinger has to like hearing it.

The tag teams put in an impressive match, as they had to battle to keep the crowd invested with so many bodies and quick eliminations. They earned the fans’ interest in the match, and paid them off with the extended ending between the Usos and Cesaro & Sheamus. The crowd felt appreciative of the hard work in a tough spot.

Uh-oh, the decked-out Dean Ambrose fan in front of me is getting sleepy, resting his head on his father’s shoulder. Hopefully he makes it.

Tough crowd moment of the night: boos rain down when the announcement is made that Survivor Series heads to Houston next year. Maybe Toronto feels like it’s earned a run of stay-at-home annual shows as has Los Angeles and Brooklyn.

The men’s singles Survivor Series match was a work of art, its brilliance exemplified in how it held the focus and attention of the arena for its full run-time. Chris Jericho came in as the easy favourite, but Shane McMahon seemed to come out as the people’s champ for his unlikely performance, and then with concern after his confusing exit had people immediately speculating about a botched move or a serious injury. 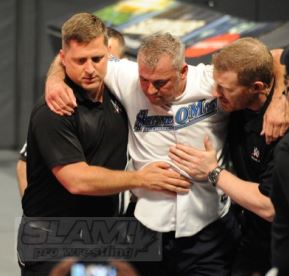 The ending of the match really tugged on the crowd’s emotion, as they both booed and cheered for Dean Ambrose’s actions at different points, were pumped up for the (latest) reunion of The Shield, and were seemingly spent by the time Smackdown finally pulled out a win. The fans really appreciated the efforts of all involved (even, at a couple of points, with Roman Reigns).

Which is what leads us back to the main event. As Goldberg and Lesnar faced off, I was thinking about how any other number of matches in this spot would fall flat after the amazing previous hour. This one, though, should have enough “wow” factor to see it through.

Then … wow. It’s over! Most everyone in my area seemed poised for the next part, whatever it may be. Another run-in, perhaps an appeal by Paul Heyman to have the match restarted, a ferocious comeback and party-spoiling by Lesnar … anything to explain how we were going to spend the next 30 minutes until the listed PPV timeslot ran out.

Then, “Thank you for attending Survivor Series” brought boos, if for no other reason than it confirmed what people couldn’t believe: it really was over in less than two minutes.

Shuffling out into the concourse, people were debating with strangers over the merits of surprises and what this means for both Goldberg and Lesnar moving forward. Some balladeers were singing what might be described as a modern-day wrestling folk tune: “Two Spears and a Jackhammer.” Seriously, a couple of guys made up a song with that line to mark the occasion. I hope they finish and release it.

However, despite the boos directed at the goodnight message, I didn’t hear anybody upset about the ending. Nobody sounded mad, demanded money back, or even looked upset. I’m sure there were people like that, but I didn’t see any on my walk back to my car. Instead, people looked energized, thrilled to have received what is so difficult in today’s pro wrestling world: a true surprise.