As a recurring show, Takeover is at times both table-setter and show-stealer, ushering in the WWE’s big Sunday events as something of an appetizer, while often being just as satisfying as the main course. Tonight, in Toronto, the NXT stars take aim at filling some bellies. There are title changes and tournament winners, so let’s get to it!

Let’s skip straight to the dessert, with a recap of the main event championship match between Samoa Joe and the champion, Shinsuke Nakamura.

This is scrappy from the get-go, with the champ driving a knee into Joe’s gut and sending him to the floor for a breather. The crowd is still singing Nakamura’s theme as he drives a foot into Joe’s head, sending him over the barricade.

After trading punches, Nakamura throws Joe back over again and into the ring where Joe gains an edge with an enziguri, then scrapes his boot across Nakamura’s face a few times. An elbow drop earns the challenger a two-count, and so he turns his focus to Nakamura’s knee with strikes and submission holds.

Nakamura tries to jump back in charge by taking a run at Joe, but the challenger dodges and tosses him through the ropes, then follows him with a suicide dive. The champ’s not done, though, and hits several strong kicks and drives his knee into Joe again and again, one off of the top rope.

With both men swaying on their feet, they resort to trading punches. Joe goes for broke by trying the Muscle Buster which Nakamura escapes and counters with his Kinshasa, but only for a two-count

Things get ugly on the floor as Joe delivers a low-blow which the ref misses, drives Nakamura back-first onto the steps, then brings him into the ring via the Muscle Buster for the win. 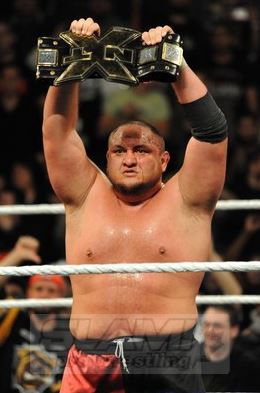 First up on the card: some local flavour. And yes, that’s spelled with a “u” because we have our All-Canadian Canadians stepping into the ring. 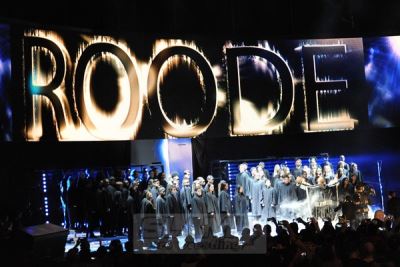 A choir belts out Bobby Roode’s glorious theme, as he soaks in the adulation of, well himself, slowly making his way to the ring. Corey Graves, no stranger to hyperbole but apparently a stranger to exciting events, proclaims the entrance the most amazing thing he’s ever seen in his entire life. Tom Phillips urges him to calm down a bit.

Interestingly, Roode isn’t billed from anywhere, whereas Dillinger is announced as hailing from Niagara Falls, Canada. Just trying to keep the cheers in check for Roode, perhaps. Still, all it takes is for the two men to lock eyes and the crowd chants it “Awesome”.

Dillinger takes Roode out of the ring twice on opposing sides, running his lower back into the barrier and forcing Roode to beg off once back in the ring. Roode finds an opening and turns the tables, backdropping Dillinger over the top rope and sending him into the barricade as a receipt.

Roode focuses squarely on Dillinger’s neck with strikes and drops, even finding time to taunt Dillinger with his own ten-fingered salute. As Dillinger claws his way back into the fight, he readies the Tye Breaker, but Roode slips out of the ring to escape. Dillinger drags him back in and only receives a spinebuster for reward.

Roode seems to seal the deal with a superplex, but it only nets a two-count. Frustrated, Roode sets up his own Tye Breaker, but Dillinger wiggles away and comes up with the idea to use a Sharpshooter at Survivor Series, but Roode finds his way to the ropes. Trying to follow up, Dillinger misses a corner charge, allowing Roode to run him into the opposing post and hit his Glorious Drop DDT for the win.

Things escalate quickly here, as moments in we have Thorne climbing the tower that is supporting the shark cage holding Paul Ellering above the ring, leaping off with a senton and taking out both Authors on the floor. This gets the crowd jumping, but almost immediately afterwards Thorne finds himself being tossed around in the ring by Akam. 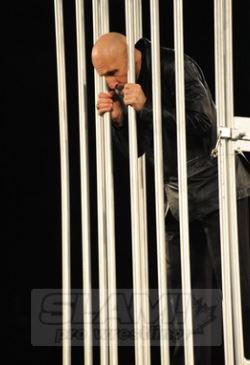 Paul Ellering looks down from his shark cage above the ring. Photo: Mike Mastrandrea

Miller gets a tag and impressively slams and suplexes both Authors multiple times. He throws Akam to the floor and dives over the top, splashing him, with Thorne following with another senton.

With all of the focus on the floor, Ellering drops a chain from the cage into the ring, with Rezar trying to use it on Thorne as he re-enters but it flies off his hand into the crowd. Still, Rezar has Thorne at his mercy, and The Last Chapter comes soon afterwards for a victory.

Winners via pinfall: The Authors of Pain

Triple H, William Regal, and Dustin Rhodes arrive with the trophy for the very humble-looking and appreciative Authors of Pain. So, what about that chain? Perhaps it was meant for more, or maybe there’s some fall-out to come. 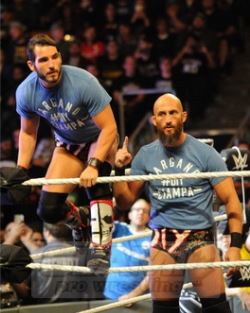 Gargano takes the initial advantage, scoring an early two-count with a crucifix, maintaining the momentum in the early going. The first big turning point, though, leads to the first pin, as The Revival scores a Shatter Machine while countering an attempted slingshot spear from Gargano.

Gargano is seriously behind the 8-ball at the start of this second round, unable to offer much against some slick double-teaming by the champs. Gargano makes it to Ciampa for the tag, but Wilder pulls Ciampa off the apron. As the ref tries to get Wilder back to his corner, the challengers get in a tag but the ref calls Ciampa back out of the ring having missed the tag.

A beatdown of Gargano in the champs’ corner ensues, followed by a Hart Attack in tribute to the Hart Foundation, but Gargano kicks out at two. He finally makes it to Ciampa, who comes in with a missile dropkick, then brings Gargano back in to squash Dawson with their combination superkick/running knee to win the second fall.

After both teams are given a chance to catch their breath, things start up quickly again as Ciampa drops Dawson with a top-rope leveraged DDT, also bringing in Gargano with a blind tag, who enters the ring with a leaping DDT for a two-count. Corey Graves goes for full heel mode saying that DIY is like the Blue Jays and the Raptors –- almost winning but not getting the job done.

Outside, Wilder grabs one of the championship belts, which he gives to Dawson who uses it to block a kick by Gargano behind the ref’s back. After Gargano escapes an inverted figure-four by way of the ropes, The Revival attempts to use DIY’s finisher on Gargano, but he dodges and Dawson takes the superkick, DIY giving the Shatter Machine to Wilder in turn — but only for a two-count.

After a trading of pinning attempts, Gargano locks in a crossface on Wilder, with Ciampa grabbing Dawson in an armbar to prevent him from interfering. With no escape, Wilder taps (and so does Dawson, for good measure).

Mickie James vs. Asuka (champion) – for the NXT Women’s Championship

Both women are quick on their feet to start, with James getting the first hard hit with a dropkick to the sitting champ, and as the fight goes to the floor she keeps the advantage with a hurricanrana. Asuka catches James’ ankle as she tries the Mick Kick, then throws her with a German Suplex and leaves her to find her own way back into the ring. 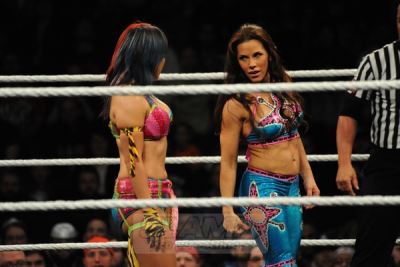 Mickie James proved she could still go in her bout with Asuka.Photo: Mike Mastrandrea

A favour returned, though, sees James grab Asuka in mid-kick, turning her over into a Half Boston Crab, which is then turned into a Muta Lock. Asuka forces her way to the ropes, so James follows with clotheslines and a seated senton off the top rope. As Mickie attempts her DDT, Asuka grabs hold of her and locks in a cross-face chicken wing, to which James submits.

Samoa Joe vs. Shinsuke Nakamura (champion) – for the NXT Championship