Buffalo crowd hot and into the heroes

BUFFALO, NY – Monday Night Raw in Buffalo was an event that has taken a few years to create. Having attended quite a few WWE cards, including another Raw, in the Queen City, I had not seen the arena packed to capacity. Tonight it was full.

What was the change? Could it be competition with Smackdown? Could it be the clear lines drawn between good and evil wrestlers? I think it is the latter. The day of the tweener is over. Shades of grey worked for so long, but if everyone is grey then there is no heartbreak in betrayal or comeuppance when one overcomes insurmountable odds. 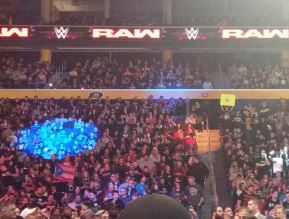 The spotlight is on the crowd at Raw. Photo by Caleb Smith

Throughout the night the crowd cheered for those who stood on the side of right and booed the bad guys. Even when the Universal champion Kevin Owens teamed with Roman Reigns it was Reigns who got the adulation. Cesaro and Sheamus became babyfaces by default, but it was a night filled with good and bad characters. There were many children at the show and they seemed to direct the energy of the crowd towards a classic wrestling card.

One surprise came when The New Day came out for a promo. They were pushing the latest New Day swag. Soon they were throwing their wares in to the crowd. Those three wrestlers should take a minute to think about throwing boxes of Booty O’s. I witnessed the lady beside me get hit quite hard by the corner of the cereal box that had been flung from the entrance ramp. She was shaken up. The box landed a row behind her and the gentlemen in that row gave her the Booty O’s. She remarked to me that she would have a bruise in the morning where the box hit her. Think twice WWE.

A funny moment in the evening was when I turned to the row behind me to talk to Pro Wrestling Illustrated‘s senior writer Dan Murphy. His friend Jenell had been listening to Dan and I discuss some matters and she blurted out “You are Canadian!” I felt a little bit like I was going to be taken away by the police and said “Oh, no.” She replied “You said ‘eh.'” I was caught. While I pride myself on a verbose vocabulary and I desire to speak the Queen’s English I still slipped in to Canadian slang. Sigh.

A highlight of the night was the Goldberg and Brock Lesnar showdown. I had attended WCW shows many years ago where the Goldberg chants were piped into the arena through the sound system. I was pleasantly surprised that this was not the case this time. The crowd was behind the grappling legend and Paul Heyman kept the segment flowing with his excellent verbal skills.

Some funny comments I heard this evening had me doubled over with laughter and perplexed as well. One gentleman commented that Braun Strowman should be renamed Ogre from Revenge of the Nerds and shout “Nerds!” all of the time. I like that idea a lot! Another person sitting near me said the following, “Did you see Brock Lesnar out there? He is a killer. He is the only one who could kill them.” I don’t know who Brock would kill, but the line between reality and storyline had been crossed by that guy.

Buffalo’s own wrestling legend The Destroyer was in attendance and was treated royally by the WWE family.

Overall, Monday Night Raw was a fun show to attend. The crowd was hot and acted with genuine emotions towards the heels and heroes. Perhaps Brom Stroman will join Lambda Lambda Lambda sometime after Survivor Series? Watch out WWE nerds.

Caleb Smith had a lot of fun at WWE’s Raw. He found it appropriate that the PWI staffer sat one row behind the SLAM! Wrestling writer. Just kidding, we love Dan Murphy!