‘The Great Sasuke’ documentary: A director unmasks a hero from her hometown 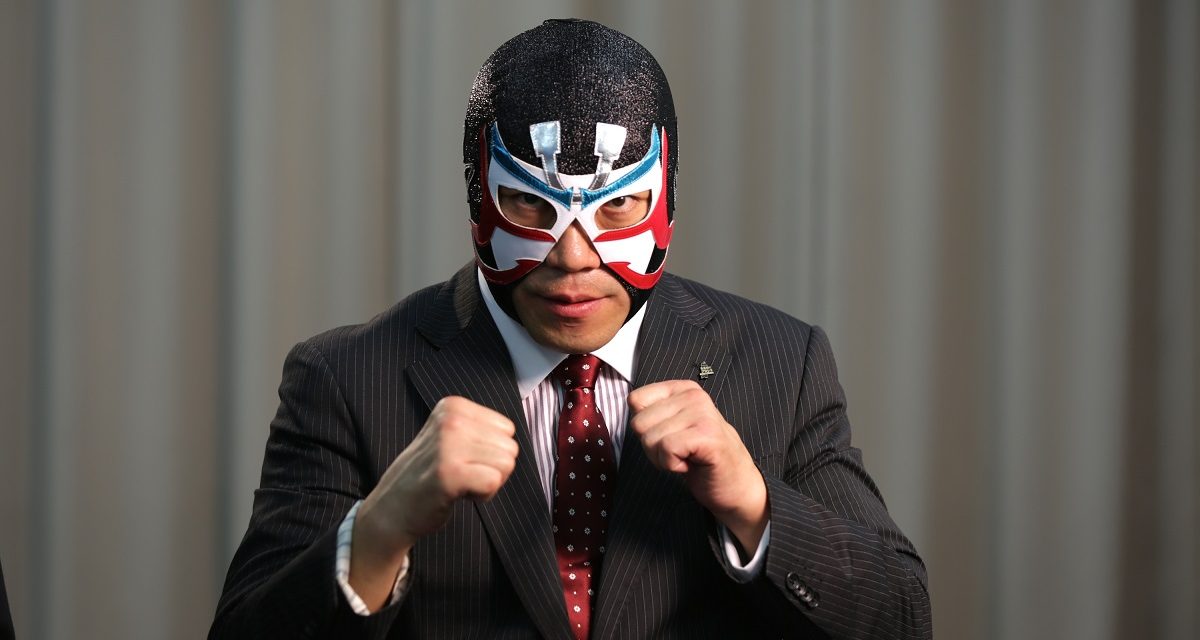 This coming Sunday, at The Revue Cinema in Toronto, The Japan Foundation presents the Canadian premiere of filmmaker Mikiko Sasaki’s documentary The Great Sasuke. The journey from inspiration to screenings of the film for Sasaki has taken five years, seen her move from working in reality TV to the director’s chair, and let her tell the story of a most unique man from her own home city. She spoke with Slam Wrestling about her project and what viewers can expect, and why wrestling fans now rank among her favourite people in the world.

The man behind The Great Sasuke’s mask is Masanori Murakawa, from the city of Morioka, Japan. It’s big, with a population near 300,000, but Sasaki remembers being a middle school student and how Murakawa stood out with his Lucha Libre mask, bringing the Mexican wrestling style to Morioka, which she describes as “very conservative.” Murakawa became so beloved that his fame extended beyond the ring, and he successfully entered politics, winning a seat on his region’s assembly as The Great Sasuke, mask and all. It was the hometown connection that most appealed to Sasaki.

“I grew up in the same town where he wrestles, and I really wanted to tell a story of a strong, complex character in my home town,” she explains. “When he was starting out, he became a superstar in my town, and I remember classmates showing up to school wearing his masks. He’s not by any means typical in my town, he stands out so much. He’s so unapologetic about it that I think everybody looks past it. He’s somebody who has this grandiose sense of himself, he’s a little bit delusional (she laughs), but it works for him.”

The desire to stand out may well be Murakawa’s specialty, and while Sasaki says that isn’t exactly a championed quality in Japanese culture, she began seeing some early connections between herself and her subject. “I really saw a parallel between myself and him,” she says. “I’m not capable of doing some of the amazing things he’s doing, daring and impossible things, but he’s somebody who doesn’t want to be normal by Japanese standards. To actually stand out is not something that’s not considered respectful in Japan, and blending in is considered a virtue, but he’s someone that loves being unique and I grew up feeling that way about myself.”

This desire to strike out in her own direction took her from Japan to San Francisco to study film, without any kind of entertainment background in her family, but plenty of support. “I’m the only one in my family that wanted to do something like this in the creative field,” she begins. “I give my father credit as far as me being able to stick with this, because at one point in the undergrad program in San Francisco, I asked him if I should I get another major like business, but he said, ‘No, you’re not going to be good at that.’ Having a back-up plan is not really helpful for me, knowing how I’m somebody who focuses on one thing and can’t focus on another. He said, ‘Don’t worry about it and stick with it and maybe you’ll go somewhere.'” 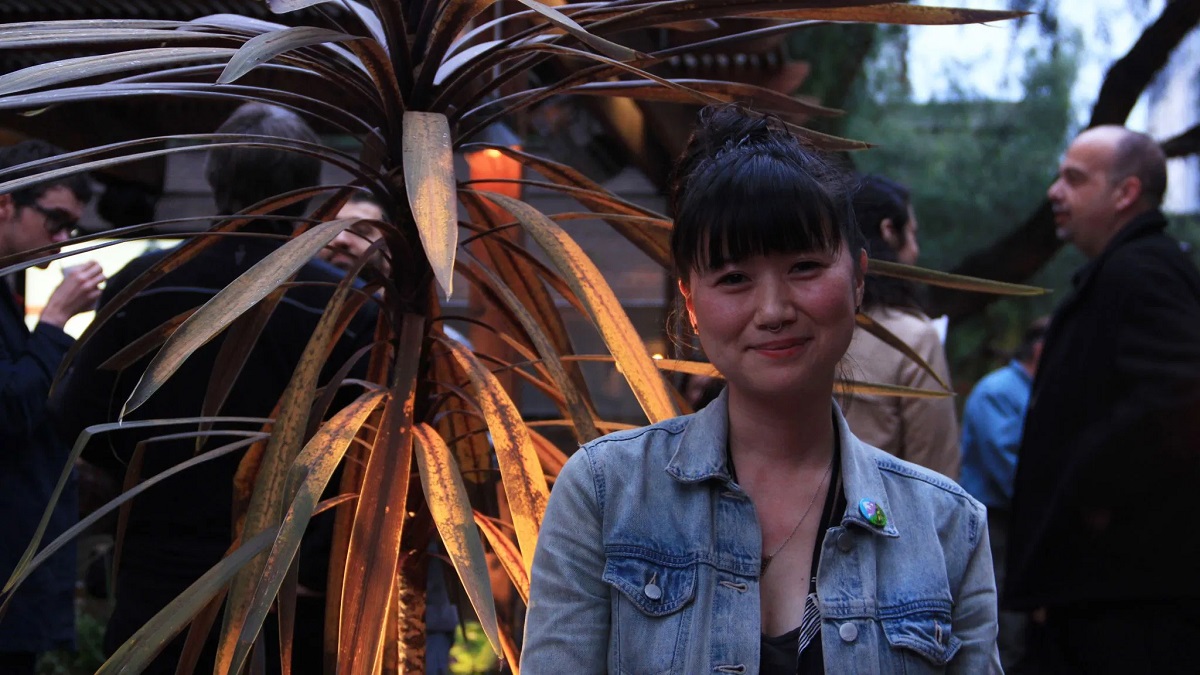 Getting somewhere happened right after graduation, and somewhere ended up being New Jersey as she took on a production and writing role for Reality TV’s Jerseylicious. “In the beginning I was still learning English and writing essays, and it was so hard,” she recalls. “I had this job right out of grad school where I became a producer for a reality TV show for five seasons, which required me to write. Reality TV is very produced, those interview bites are written, so I had to write from a very specific cultural point of view — but I’ve never been to Jersey! They have such a unique way of talking, and I’m from Japan, so how am I supposed to do this? I had to ask for so much help on this show. Maybe they (the production team) thought it was funny, but it was really torturous.”

Reality TV, therefore, was Sasaki’s entry into the industry, but she knew after those five seasons that she wouldn’t be staying in that specific field. In fact, she recalls while laughing, that the job “really crushed my soul.” However, it became a part of her experience, and she credits it with helping her move into documentary storytelling. “Reality TV trained me in interviewing skills and making people comfortable enough to talk, and how to make a story work and create an arc. Sasuke was easy, though, because he had his own arc, and I didn’t have to manipulate it all. You shouldn’t because it’s a documentary, but sometimes filmmakers have to do a little manipulation, but I don’t think I had to do it at all, because the story presented itself.”

The story, as she describes it, has much to do with Murakawa’s having reached a transitional phase in his life and career. “It was very clear to me when I started talking to him that he was trying to figure out what the next thing was for him,” she says. “That didn’t mean he wanted to quit wrestling, but he is always trying to do more, constantly on the hunt for something new. He’s physically very beat up, and he never said, ‘I’m in terrible shape these days,’ but I noticed it and it’s got to be part of your thinking when your job requires to be physically, fit, and you’re not as strong as you used to be. It’s the story of a mid-life crisis.”

As her subject moves into a somewhat uncertain future, she recognized right away where Murakawa’s unwavering certainties do lie: with his family, and with his life as The Great Sasuke. Where Murakawa ends and Sasuke begins, or vice versa, isn’t that important in Sasaki’s opinion. “He’s 100 percent The Great Sasuke everywhere he goes,” she explains. “I don’t think he has a distinction anymore. He has his vulnerable moments, but it’s being vulnerable as Sasuke, not as this other person that he was before he put on the mask.”

“He’s by nature a performer,” she continues, “so when the camera is on he tends to be a little more dramatic than he needs to be. For instance, his nerve system is so damaged that he doesn’t have a lot of grip in his hands, so when he was putting on his wrestling boots he was having such a hard time threading the laces, but every now and then I wondered if he’s putting it on a bit, making it look harder than he needs to.”

As for his family, Sasaki always wanted to include them in the story, since this story was as much about his life outside of the public eye as it was about his exploits. She found him resistant to including his wife and children in the story, though. “Talking about wrestling is really easy for him, but talking about his family and his wife, he didn’t want to do that,” she admits. “It was a little bit of a hassle to even get an interview with his wife, but it was a wonderful interview he got from her. I think he’s very protective.” 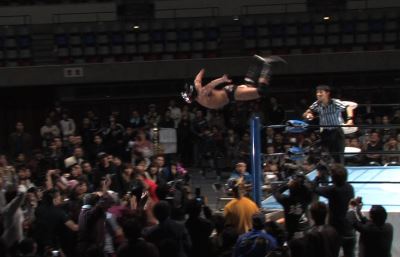 The Great Sasuke takes to the air. Photo courtesy of Jonathan Schwarz

This story also provided Sasaki with an entry into the world of pro wrestling. Like most people, she was aware of it as an entertainment, but never understood the appeal. “Of course I was intrigued by the wrestling world,” she remembers. “When I moved here, WWF was kind of interesting, but I didn’t really get into it, and this movie was a great window into the world for me. I did not want to make fun of it, because honestly I could have done that easily. But instantly, I got the attraction of wrestling. I didn’t want to shy away from the funnier, over the top, and super cheesy moments because that’s part of the appeal, but I want to present it like it’s meant to be, a little quirky, a little campy, but at the same time, totally serious and something that you feel passionate about.”The passion she speaks of is part of what drew her in, something she saw in the fans she encountered in the course of filming, and she is quick to express her enthusiastic appreciation for them. “The fans, holy shit, I love wrestling fans! They’re the best people on earth. They’re so fun and intense about their passion.”

Outside of the completion of this film, which has taken the better part of five years for her, Sasaki works in advertising production which she finds makes her “oddly happy.” She works with many fellow graduates from UCLA film school, including friends on this project. John Schwarz is her cinematographer, Alex O’Flinn edits with her and has been on the production since day one of filming, and she met the composer, Aiko Fukushima, through Sundance.

Sasaki will be in Toronto for the upcoming screening on Sunday, October 16, which she is very excited for as it’s a way to present her film in a different manner than she’s done before. “I’ve been at screening at film festivals,” she says, “and those are people that are interested in films. At Cinequest (an annual showcase in Silicon Valley), it was a lot of wresting fans in attendance. This time around, it’s organized by The Japan Foundation, and I get to present it from a cultural standpoint.”

The Japan Foundation’s mandate is to exhibit Japanese culture at venues around the world, and Sasaki said they were in touch with her early on in her filming process. When the Foundation was putting together a masked-themed film screening series, everything came together and The Great Sasuke became a part of the showcase. Sasaki will be hosting a Q & A at the screening and is most hopeful that she’ll get to hear some feedback on Sunday and from anyone who has some time to reach out through the film’s website.

“I love it when people talk to me about the film afterwards, and if anybody has five minutes to tell me what they think of the it, I would love to know.”