No Mercy: Many titles and a career up for grabs 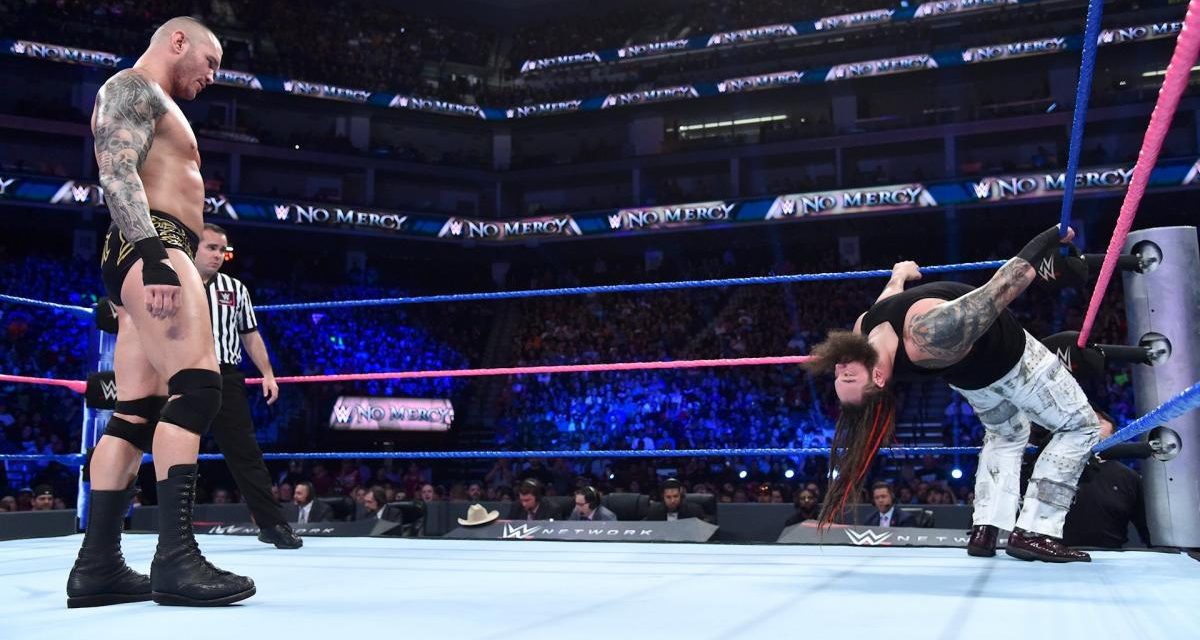 With a juggled line-up card (could it really be true that the WWE shifted their match order around the Presidential Debate time?), No Mercy throws its Triple Threat Title Match at you first, bringing you Randy Orton vs Bray Wyatt in the main event. Dolph Ziggler, meanwhile, is in “Go Big or Go Home” territory as he fights for the Intercontinental Title and his career. Catch up on all the results here!

Mauro Ranallo, JBL, and David Otunga bring us the action from Sacramento, CA, with the final match of the night being contested as much between the ears as between the ropes.

Both Sister Abigail and the RKO make a teased early appearance, but this doesn’t have the feel of a match due to end quickly. Orton suffers the first real disadvantage, with Wyatt tossing him over the announcer’s table and into a heap of chairs. As Wyatt sets up the steel steps for something no doubt diabolical, Orton grabs him and sends the fight into the ring.

Still, Wyatt has the upper hand, but perhaps choosing to use that advantage for an attack highlighted by a chinlock was not wise. Orton patiently works up his energy again, then goes for his greatest hits with a quick powerslam and wants his second-rope DDT, though Wyatt wiggles out of that and soon afterwards just chucks Orton to the floor back to where he had those steps ready. He lays Orton out on the steel, then tries a running senton only to see Orton move and feel the impact on his own back.

Dragging Wyatt back into the ring, Orton has him ready for an RKO until the lights go out and come on again to show Luke Harper standing right in front of him. Wyatt, from behind, lands Sister Abigail and gets the win.

First out the chute is the meeting of wildly differing techniques, and it should make for a good match in this format. All three try for quick finishers, but no final moves are landed. Ambrose shows an early lack of care as to who he takes out, while Cena and Styles seem to be more preoccupied with each other. This includes Styles’ landing a Phenomenal Forearm over the top rope to Cena on the floor, and a Pele Kick after an escape from the AA.

Ambrose becomes a non-factor early as Styles backdrops him over the top, leaving him to focus fully on his current most-despised rival. An exchange of sleeper holds gives Ambrose the chance to re-enter, taking Styles’ place and holding the sleeper on Cena. Cena escapes and performs his signature sequence of shoulder-blocks to a chorus of boos, but Styles uses a German Suplex to stop him before he can shuffle his five knuckles. Ambrose follows soon after with a flying elbow to the standing Cena, leaving only Styles and Ambrose for a spell who exchange pinfall attempts until a double clothesline slows everything down. 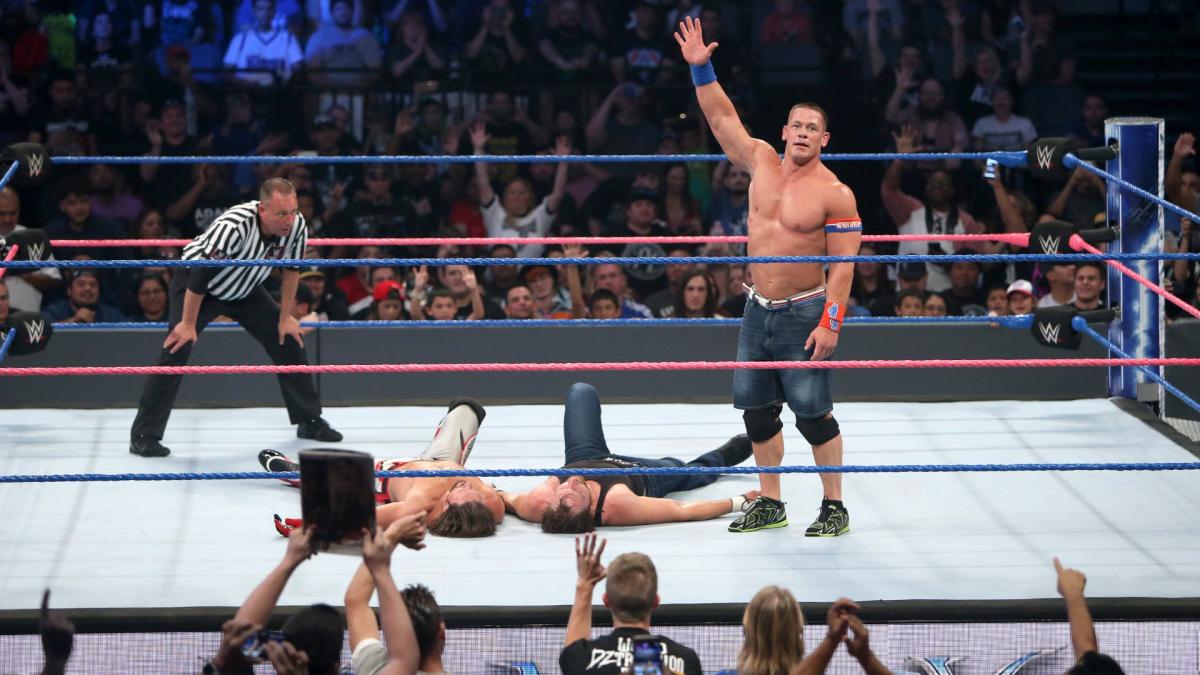 Cena rolls into the ring to see Ambrose and Styles laying down side by side and delivers a Ten Knuckle Shuffle, then an AA to both opponents. Ambrose, though, kicks out cleanly, only to be locked into the STF from which his only escape may have been Styles breaking it up, taking Cena to the apron with a suplex. A Styles Clash to Ambrose leaves Cena open to put the STF on Styles, which Ambrose breaks up.

All three are worn out in the middle of the ring, but after a final flurry, Styles is double-teamed with both Ambrose and Styles locking submission moves onto the champ. As Styles taps, the ref calls for the bell, but not to end the match. He declares the match will re-start as there was no way to identify a winner between Ambrose and Cena.

Styles knows how to take advantage of such an opening, and brings in a chair to level Cena shortly after the challenger had taken out Ambrose with an Avalanche AA, and pins Cena for the win.

If there is such a thing, this felt a bit like an old-school Divas match, with a lot of screaming and hair pulling. Carmella does go for an effective, if obvious strategy by pounding on Nikki’s neck all through the match. Nikki escapes two versions of the Code of Silence, sneaking in the Rack Attack 2.0 for the win.

Backstage, Shane McMahon and Daniel Bryan are impressed with Nikki’s win, but are set upon by The Miz and Maryse. The Miz wants to renegotiate his contract after tonight, seeing as Dolph Ziggler’s money will be freed up after he’s retired.

Jimmy and Rhyno kick it off, with the champs pulling off the first double-team maneuvering, but it’s matched by the challengers and Slater is soon on the receiving end of a lengthy sequence of punishments from the angry-looking Usos. Rhyno gets in again and looks ready to Gore his way to the win, but he’s felled from behind by Jimmy and finds himself now beaten down for a long while.

With Rhyno barely hanging on and weakly kicking out of pinning attempts, Slater is hopping on the apron and hoping to get back in — which he does to the great approval of the crowd. His bid to carry the team falls short, even after powerslamming Jimmy off the top rope. Jimmy hits a superkick, and although Slater is caught in Tequila Sunrise, Rhyno Gores his partner out of the hold, then gets a tag and delivers a second Gore for the win.

These two tall fellas are mad at each other and the fight quickly goes to the floor. Swagger bounces Corbin’s head off an announcer’s table repeatedly, but Corbin smashes Swagger’s hand into the steps. Thankfully, it’s not his “We the People” hand. Back in the ring, Corbin is single-minded in his attack on the injured hand, with Swagger grasping some brief advantages with power moves like a JBL-approved clothesline. Corbin survives an ankle lock by reaching the ropes, then pokes Swagger in the eyes before slamming him with his End of Days finisher.

Match #5: The Miz (champion) vs. Dolph Ziggler – for the Intercontinental Championship & Ziggler’s career

Ziggler is coming on hard with an extra bit of air in his dropkicks, but Miz weathers the early storm and slows Ziggler down with impact moves like a bottom-rope clothesline and his neckbreaker combo. Three dropkicks on a slumping Ziggler look good, until Miz takes a moment to mock Daniel Bryan, then tries another dropkick and instead receives one himself.

Miz tires to sneak in a pin with his feet on the ropes, but the ref catches him, so he changes gears and drives Ziggler into the mat with a kneeling DDT. A series of attacks on the left leg of Ziggler leads to a figure-four leglock, but Ziggler won’t throw away his career like that and struggles to the ropes. Plan C brings Maryse up on the apron to distract the ref while Miz removes a turnbuckle pad.

Even a drive into that pad followed by a somewhat sloppy springboard powerbomb can’t keep Ziggler down for three, though, and when the challenger leaps up and lands a Zig-Zag, the crowd really believe this is it … but it’s only a two-count for Ziggler. The crowd also boos lustily as Maryse sprays Ziggler in the face and Miz follows with a Skull-Crushing Finale, but Ziggler’s foot finds the rope before a three-count. 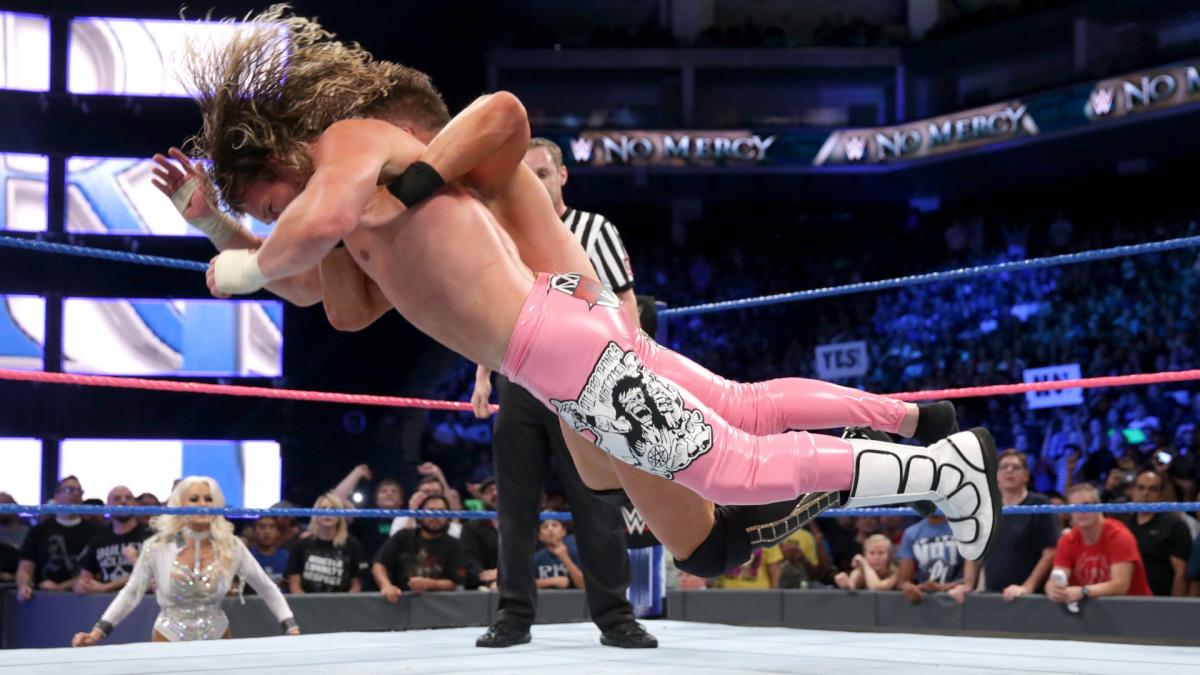 Maryse watches as The Miz takes Ziggler to the mat. Photo: WWE

Seemingly stunned and out of ideas, Miz falls prey to a superkick, but Ziggle can’t get the pin in time. Plan E sees Kenny and Mikey arrive to distract Ziggler, which they do, but a second SKF still only gets a two-count. As the ref kicks the Spirit Squad to the back, it’s The Miz who is distracted, and a superkick saves Ziggler’s career and cuts short The Miz’s run at Intercontinental history.

A recap from the pre-show sees Curt Hawkins announcing his very first match coming this Tuesday on Smackdown. Also, American Alpha and The Hype Bros got a win in their 8-man match against The Ascension and The Vaudevillains.

Alexa Bliss is out to the ring, explaining that Becky Lynch was afraid to lose her championship tonight, and that Shane McMahon and Daniel Bryan are protecting her by keeping her out of the match. Bliss makes a classic mistake by saying there’s nobody who is brave enough to face her … but of course, there is. 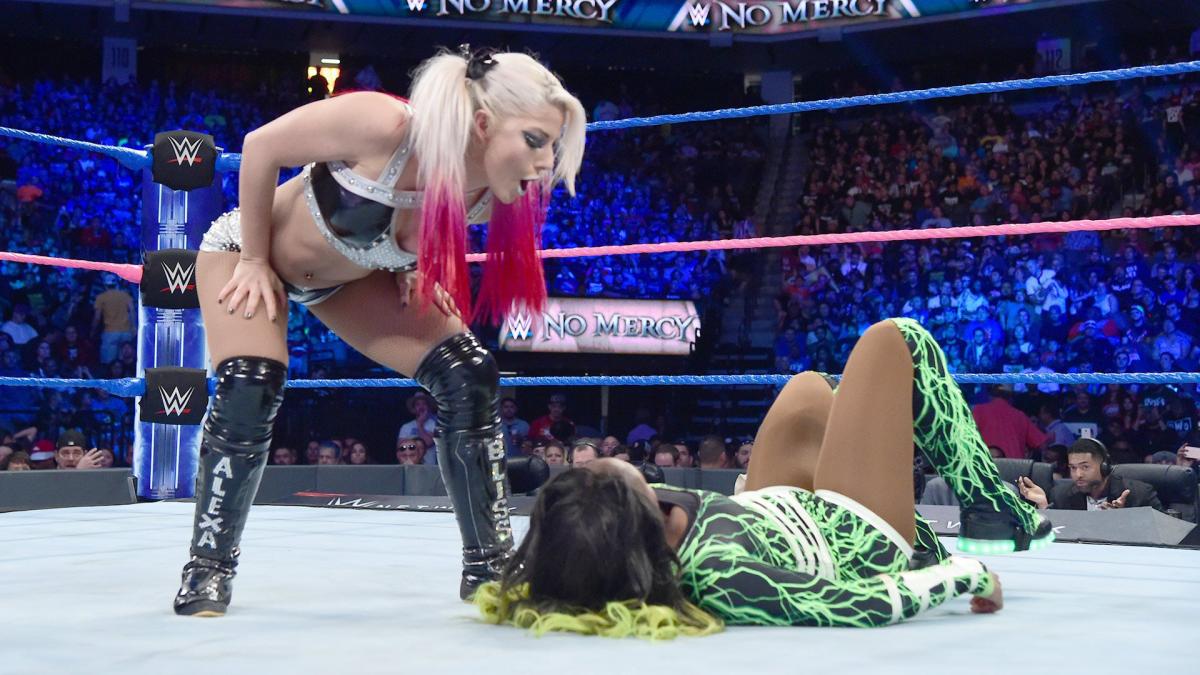 Bliss is in a taunting mood. Photo: WWE

Bliss takes many, many kicks and suffers a moonsault, but she peskily battles her way into control and locks in a cross-arm breaker. Naomi, though, rolls her way into a pinning position and knocks off Bliss.

The next WWE pay-per-view is a Raw’s Hell in a Cell on October 30th.

An entertaining triple threat match, plus Ziggler and The Miz were in fine form.