To many, Sue Aitchison is the “wish lady” for World Wrestling Entertainment. Thirty years ago, she steered the promotion’s community relations division into partnering with “wish” agencies, which offer sick children and adults a chance to meet a WWE superstar. 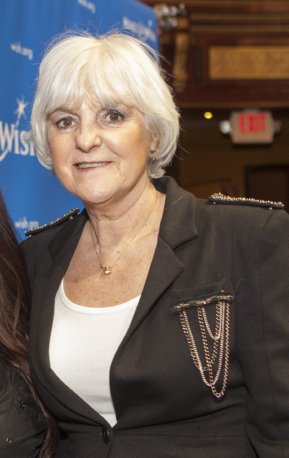 Though her roles have changed over her time with WWE — she actually started as a receptionist in 1986 — her involvement with Make-A-Wish, The Dream Foundation, Dreams Come True, Rays of Sunshine, and many other wish-granting charities has not wavered.

But her emotions often do.

At an event, when in the company of a child with an incredible challenge in front of them, such as terminal cancer, Aitchison can stay strong. It’s later on that she can be overcome.

“I’m absolutely fine, until somebody says thank you. I don’t know why,” Aitchison said. “I think you have to hold it together. But when you see the smiles on these children’s faces when our WWE superstars walk in a room, it is amazing.”

She shared a recent example. Sheamus and Fandango had visited a hospitalized young fan while on a European tour. The child was morose and down, without any fight, “basically giving up.” Sheamus told the fan that the company would be back touring in Europe in a few months. “We want you to come to the arena,” Sheamus encouraged.

Aitchison picks up the story: “The child came. The mom sent me a photograph, it’s the first time that this child has stood up, albeit with braces,” she said. “Giving back his self-worth, self-esteem, and mom says it’s all thanks to WWE and the WWE superstars. You know, when you see that reaction, it really makes my job worthwhile. You actually feel that you’re actually doing something and making a difference.”

In her native England, Aitchison was a social worker, but upon moving to the United States, she changed gears. As the then-World Wrestling Federation grew, so did demands for talent to make appearances and help out charities. Aitchison grew into the role, and has not looked back. Now, as WWE Director of Talent Relations, she looks mainly after alumni. “They know me from when they were in the ring. They’re now out there as ambassadors for our company,” she said. “They have a comfort level when they call here, they know who they’re speaking to.”

One of her responsibilities at WrestleMania is the WWE Hall of Fame, arranging for the honoured guests and the alumni to be a part of the event. Her other Mania Moment is the “Circle of Champions,” a special event for invited families who have children facing incredible odds. [SLAM! Wrestling attended in 2014: Make-A-Wish event changes lives of children and wrestlers] This year, 33 families are heading to Dallas.

The social work background helps her deal with people. “I am on the phone daily,” she said. “I get 20-30 requests a week just for people wanting to meet our guys. The reason we work with ‘Wish’ agencies is they actually do the screening, because it can be very, very difficult. People do not always tell the truth. … Working with Wish agencies, the kids, the youth, their one wish is to meet our guys, which is a big honour for our business, that that’s what they would want to do is meet our WWE superstars.”

There are approximately 200 WWE wishes a year with Make-A-Wish alone. John Cena is the all-time wish-granter in its history, well past 500 and growing. “John does it with charisma, charm. He goes in there and he makes these children feel so very, very special,” said Aitchison. “If I was doing this job and people were just paying lip service, it really wouldn’t be magical, it just wouldn’t work.”

Make-A-Wish presented Aitchison with its Chris Greicius Celebrity Award in 2006; other wrestling-related honourees are Cena, Dwayne “The Rock” Johnson and Jesse “The Body” Ventura.

In a couple of weeks, Aitchison will be receiving the Jason Sanderson Humanitarian Award at the Cauliflower Alley Club, at its annual reunion in Las Vegas. She has been mulling over her acceptance speech. “I’m working on the premise of the team effort, if you like, that I am accepting it on behalf of WWE and all the people here that actually make these dreams come true,” she said.

While Cena rightfully gets a lot of praise for his wish-granting, he is hardly the only one who contributes their time to the cause, of course.

“It’s incredible to be able to be an influence,” said Lynch. “For us, I think we get more from them than even they get from us. I feel like they’re real heroes, they’re the ones who are really fighting. I think it motivates us and then to see the joy on their faces and what they get from coming to the shows and meeting us, it’s a really, really humbling experience.”

Heading to a private room for some quiet time with a sick child and his or her family can be a wonderful respite from the chaos of televised WWE events.

“At TV, there’s a million things going on. Guys are being asked to cut promos here, do something over there, shoot a vignette,” said Aitchison. “One of our producers came up to me one day. He said, ‘Sue, how do you do it?’ I said, ‘Do what?’ He says, ‘We’re looking for guys to do different things and, phechew, they’ve gone in different directions. You’ve got a line outside the door, and they’re waiting.'”

They do more than wait; when they see Aitchison at an arena, it’s a hello and then a question: “Got wishes today?”

Aitchison is thankful for the wonderful journey, and though she doesn’t have kids of her own — “I never had kids, but you know, I have 5,000 kids” — she is blessed in other ways.

“How many people have a job that that’s your aim, to put a smile on a face, and then actually to see the result?” she concluded. “I do get to see the result, and hear about the result. It’s amazing. Sometimes you’re having a bad day for personal issues, or whatever’s going on in your life, and then, you know, you get the simplest thank you, and you’re like, ‘Whoa.'”

— with files from Jan Murphy