WWE gets it right with latest Sting DVD

Steve Borden — Sting — has always been a man of mystery. Whether it is because he values, protects his private life or he wants to preserve the mystique of his character, Borden hasn’t opened up very often over the years.

Sting: Into the Light could possibly be the most in-depth interview Borden has ever done. Disk One of the three-disk set, is a mini-documentary in which Borden drops his guard, introducing us to all the important people in his life, including his mother, father, brothers, his children and his wife. We visit his home, his ranch and a place that is very sacred to him, where he goes to church.

As we gain more insight into his world, we understand why Borden has been reluctant to sign with the WWE over the years. It is not just the fact he is a born-again Christian and wants to respect the tenements of his faith, which is understandable; it is that Borden really cares about how his in-ring persona reflects on himself, his friends and his family. With the WWE known to sometimes push talent into angles or roles they are not comfortable with (the recent Reid Flair incident, for example), it is clear that Sting has harboured some well-founded and legitimate concerns.

Borden does spend some time discussing becoming a born-again Christian and what impact that decision had on his life. Borden didn’t have that far to go to find his place in the Christian community since his brother is the pastor at the local church. Borden is not judgmental or preachy about it. It was just the right choice for him and he draws strength from his faith, the community.

The magnitude of all that he has accomplished is reflected in a visit to a massive storage facility located on his ranch. In it are shelves and shelves of boxes containing gear, posters, toys, all manner of Sting memorabilia he has collected throughout the years. 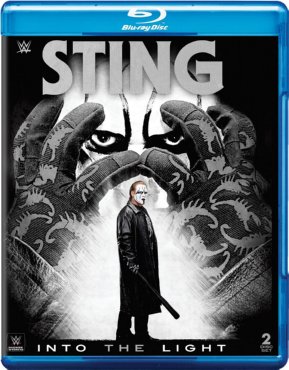 Reminiscing, Borden jokes about being truly awful he was when he first laced up his boots and how Jerry Jarrett joked that he didn’t think he or James Hellwig (The Ultimate Warrior) would ever make a dollar in the business. In tagging with Rick Steiner later on, Borden confesses they were truly clueless most of the time but made up for their lack of experience with energy and exuberance.

Borden cites his first match against Ric Flair at the Clash of Champions in 1988 as the turning point in his career. How he learned so much from Flair in that one match alone. Bookending things quite nicely are Borden’s thoughts on that final Monday Night Nitro match versus Ric Flair when WWE bought WCW. Watching the bout in his living room, he chokes up, recalling how he tried so hard to keep it together that night knowing it was the end of WCW and quite possibly of his career too.

Other noteworthy superstars such as Lex Luger, Ric Flair, Scott Hall, Hulk Hogan share their thoughts as well. Possibly the best story is how Luger and some other WCW traveling buddies pulled a prank on Borden while they were renting a car. One of them stole his wallet at the rental counter. At dinner later on, everyone purposely revealed their lousy driver’s licence mug shots, chatting about them. Borden soon realized his wallet was gone as well as everything in it. Everyone laughed harder and harder as Borden became more and more upset.

Another clever story is Tyson Kidd recalling how angry he was at seeing Sting using the Scorpion Deathlock on WCW TV. Kidd was livid that Sting would steal Bret Hart’s Sharpshooter. How dare he do that to Canadian legend? When Kidd did some digging, he soon came to realize Sting had been using the Scorpion Deathlock long before Bret ever had. Doh!

The only real shortcoming of Sting: Into the Light is the extraneous footage of Borden meeting with the various WWE departments after his signs with the company. Without any real reason other than to promote the WWE itself, we sit through meeting after meeting as the company’s big wigs introduce themselves, patting their own backs and flaunting their accomplishments. The unnecessary, transparent navel-gazing is awkward and embarrassing. It all gets to be a bit much.

The set is called Sting: Into the Light not WWE: A Corporate Portfolio.

Disk Two is filled with more of Borden’s short stories and seven matches including his Japan Supershow bout against The Great Muta and a Submit or Surrender match against Cactus Jack.

Disk Three is all matches with Borden battling Vader, Steve Austin, Goldberg and others. It also features his WWE debut and his match against Triple H at WrestleMania.

Although there are only 16 matches in total on the DVD release and it would have been nice if there were far more, as a whole they are more reflective of Borden’s career than those found on The Best of Sting set last year. [See my review of that: Sting’s WWE DVD full of holes] Sting: Into the Light is the set The Best of Sting could and should have been. Borden breaking his silence, speaking candidly about the twists, turns of his legendary career, his life, his mistakes, his triumphs, his highs and his lows; are what make this set such compelling viewing.