Hack Myers, who died on Saturday, was an ECW original who became known as the “Shah of ECW” for the sound that he made in the ring.

His passing is a result of complications following brain surgery at John Hopkins Hospital in Baltimore. He was 41 years old. 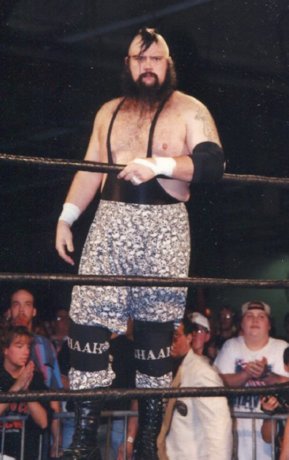 He was born Donald Haviland on December 7, 1973 in Baltimore, and “Hack” — a longtime nickname — got into pro wrestling in 1990. The 6-foot-2 wrestler also worked under the names Bronco Billy, Mad Dog, New Age Spoiler, Extreme Shah, Admiral H. Oscar Meyers, and in The Texas Longhorns tag team. His weight fluctuated through the years, from an optimal 225 up to 360 pounds.

Axl Rotten was one of his original mentors and trainers, and the one who got him into ECW, and was the one who informed the wrestling world about Myers’ impending surgery, the complications that led to him falling into a coma and eventual passing.

Donald Hack Meyers Haviland “I don’t want to accept that I’ll never get your daily phone calls ever again. I will miss you so much my Brother. I love you & Will pray so hard for your family. I know they will miss you so very Much! Rest in Peace my friend. Throughout both of ups & downs WE stuck together.” Say HI & give Candido a hug for Me. You will NEVER be forgotten buddy. My heart is heavy as I say Goodbye. I love you Bro. ?#?HackMeyers? ?#?Shaah? ?#?ECW?

His biggest run came in the original ECW, from 1994 to 1998. He was used primarily as enhancement talent, putting over the likes of the Dudley Boys, Tommy Dreamer and Chris Benoit.

“Sad to hear the passing of The Shah of ECW Hack Myers. Great guy, I had alot of my early matches w/him. God Bless RIP #SHAH” wrote Tommy Dreamer on his Twitter account.

But, like many things in E-C-W, his character took on a life of its own. Being billed from “The Last House on the Left” helped make him memorable as well.

“He was always over with the ECW crowd,” said regular ECW photographer George Tahinos. “They used to chant ‘shah’ when he did would punch his opponent.”

A big part of his following was that “shah” sound he made when on the attack. It grew from there.

“He was always a good guy to me in my early days,” wrote ECW jack-of-all trades Gabe Sapolsky on Twitter. “Big part in building fan participation in ECW.”

In an online post, Myers talked about those early days in ECW:

I would thank Todd Gordon and the Mastermind of ECW Paul Heyman for giving me the opportunity to work with great talent including the names above and to be seen throughout the country as well as International. When I was working for ECW I was in the locker room where everyone complimented and criticized each other so that their performance could be 100%. I once remember Cactus Jack who hardly ever gets upset told a photographer to leave the locker room due to the fact that he said that it would take Cactus Jack to save the show. Cactus spoke out loud and out of character said that everyone in this locker room worked hard and if you want to come back into this locker room, you will have to go up to each individual and apologize. If I didn’t have respect for Cactus Jack already, I did that night. I was fortunate enough to have the opportunity to wrestle Cactus Jack on two occasions and on both of them I received a good beating but learned a lot.

In 1999 at the November to Remember event, Myers lost a Loser Leaves Town match to Too Cold Scorpio and left ECW.

Through the years, there were appearances in all the major promotions for Myers, but never in a starring role. In TNA, he was part of the security detail in Florida.

Funeral details are not known at this time.