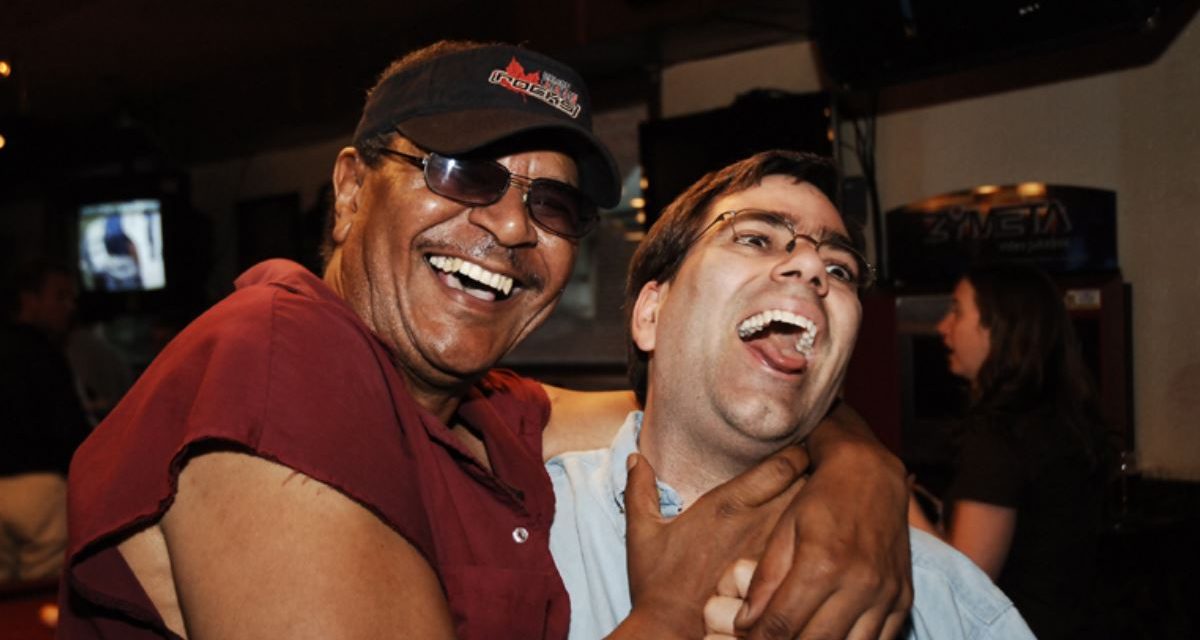 Ricky Johnson says I never write about him, but then I remind him that I first wrote about him in 1989, when I was doing my Canadian Wrestling Report.

Last night, December 6, 2015, at a Destiny World Wrestling show, it all came full circle, where I was publicly able to thank Ricky for the role he had way back when in helping to shape my writing career.

So here goes, Ricky, I’m going to write about you. 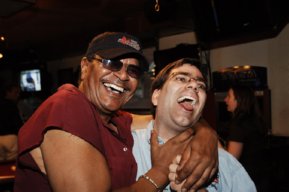 Ricky Johnson threatens Greg Oliver to write about him back in 2006 at the launch of Bang Your Head! The real story of The Missing Link. Photo by Mike Mastrandrea

For those who don’t know, Ricky (James “Jay” Henry Bowles) is the younger brother of Rocky Johnson, by eight years. He was born in Amherst, Nova Scotia. Their father died when Ricky was only four years old, and their mother raised five children in Toronto.

Ricky made his professional wrestling debut on March 17, 1978, taking on “The Golden Greek” Chris Tolos in Hamilton, Ontario, and it went to a 15-minute draw.

Two years later, he worked Maple Leaf Gardens for the first time, on February 10, 1980. Elio Zarlenga’s CWR newsletter reported on the match: “The experienced Chris Tolos easily defeated Ricky Johnson, forcing Johnson to submit with the Spinning Toe Hold in 10:38. This was Johnson’s Toronto debut and he looked quite impressive. With a few more matches under his belt he could probably join his brother Rocky as a main eventer the world over.”

His biggest run came alongside Rocky, as the Soul Patrol, in Hawaii, in the mid-’80s, but fans around Ontario saw him work for years and years on the Bearman circuit, run by Dave McKigney. Ricky was up and down those cards, main eventing against The Sheik (“Don’t forget the finish, but for everything else we’ll just wing it”), or mentoring youngsters, like a young nephew of The Sheik, later known as Sabu. He traveled a bit too, including Puerto Rico, Samoa, Tonga, Japan, New Zealand, Australia, Fiji, Germany, Spain, and Korea.

He kept in Toronto and was a part of the fabric of the wrestling community, as much as Big Mac, who brought the ring from town to town. Ricky also worked for the city for a while, and did some acting, including the shows T.N.T., Night Heat and commercials.

It was then when I got to know Ricky.

I was just a teenager, enamoured by pro wrestling and getting over a bout of Hulkamania, realizing there was SO much more wrestling out there.

The two men that lifted the curtain, so to speak, allowing me to go backstage and really learn how the business worked was Ricky and the late, Wayne Cassibo, who was referee Wayne Cashman (my first book, The Pro Wrestling Hall of Fame: The Canadians is dedicated to Wayne). 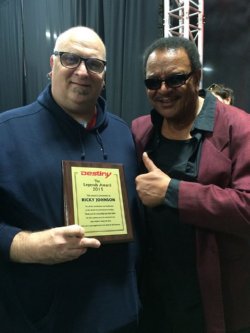 So going back to 1989, that’s when I profiled Ricky in my Canadian Wrestling Report. We kept in touch, both professionally and personally; those who know Ricky will not be surprised to learn that I had the number of the local bar in Parkdale where he hung out, The Office, listed alongside his home number.

As I peek into my Ricky Johnson file, there are dozens of interviews, usually about other people.

The biggest one I did pertains to the final Bearman McKigney tour in 1988, in Newfoundland and Labrador, where the van went off the road to dodge a moose, killing Bearman, Adrian Adonis and Victor Arko, who wrestled as Pat Kelly.

It’s an emotional feature, talking to a ton of the survivors from that ill-fated trip, and you can read it in the re-print of my favourite wrestling book ever, Drawing Heat (order now, you won’t regret it!).

Sunday, at Santino Marella’s Battle Arts Academy, Ricky and Rocky Johnson were slated to receive Legends Awards from Destiny World Wrestling and promoter George “The Iceman” Menezes. Alas, Rocky had some complications and was unable to come up to Toronto.

But Ricky was there, along with his wife, Jeanie, and some other friends who came out, like Big Mac and Sweet Daddy Siki.

An audible was called, and Ricky asked me to introduce him to the crowd, which was pretty cool for me on many levels, as there were others in attendance that have meant a lot to my writing wrestling days, like Scott D’Amore, Big Mac, and even Eric Young, who never forgot those days in Ike Shaw’s gym, just as I never forgot visiting the dire dormitory where they all learned their trade and were grossed out by Ike.

I don’t completely remember what I said, but I know I tried to explain how Sweet Daddy Siki was responsible for The Rock, as it was the Sweet Man himself who talked Rocky into sticking with it in Calgary when the money was the pits and he wanted to quit. (So years later, Ricky promoted himself, naturally, as “The People’s Uncle.”)

Similarly, I wouldn’t be able to say that I’ve written about professional wrestling for 30 years, with six books under my belt and countless articles, without Ricky Johnson.

Now, Ricky, will you stop whining that I never write about you?