What do Brock Lesnar, Ken Shamrock and Dan Severn have in common? They are all former UFC champion fighters. But what fans may not know is that before they were fighting in the octogon, they were all wrestling in the squared circle. 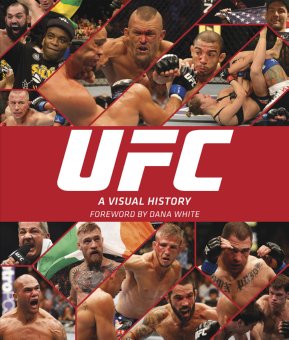 Since its inception in 1993, many pro wrestling fans have become fans of UFC as well. Of course, UFC is just one company that promotes ultimate fighting or mixed martial arts, where athletes combine their skills in boxing, jujitsu, kickboxing, karate or wrestling.

Often, it’s referred to as “real” pro wrestling, since there is definitely a showbiz element to the promotion of the events and the fighters.

So this brings us to UFC: A Visual History, a recently-released book that features a lot of crossover stars from pro wrestling, like MMA pioneers Shamrock and Severn, and years later, Lesnar.

There’s enough overlap between pro wrestling and UFC to review the book here.

Shamrock and Severn were prominent in the first years of the UFC, the pre-Zuffa era, while Lesnar can be seen in the years 2000, as he became the heavyweight champion and headlined the biggest UFC PPV of all-time, UFC 100, in Las Vegas.

A few other WWE Superstars fought in the UFC, such as Tony Halme back in 1997. Halme made his UFC debut a few years after being Ludvig Borga in the then-WWF. Die-hard fans might even remember Ron Waterman, who worked for UFC and did a handful of WWE dark matches while working in Ohio Valley Wrestling. Fans of Phil “CM Punk” Brooks will have to wait for the next edition though, as he had not had a single fight yet with the UFC, therefore is not featured in the book. Outside of the WWE, Josh Barnett is probably the most well-known fighter to have competed – and still does as a matter of fact – in both MMA and pro wrestling. Among other things, he helped further polish WWE Diva Natalya’s skills in recent years.

If you’re looking for statistics like records, heights and weights and show results, this is not the right book for you. I would strongly suggest the UFC Encyclopedia, written by the same author, Thomas Gerbasi.

What you will get here is exactly what you are promised: a visual history of the UFC with tons of photos. From the very beginning in 1993 until June 2015, the reader will take a trip down memory lane with so many great shots from every event, from almost every fighter that ever stepped foot in the octagon and all the most important, must-see UFC fights are presented.Done in chronological order, the book recaps each event as well as fighters’ debut within the specific year. It gives you a good idea of when a fighter actually started in the UFC, sometimes years before he became a star. In between the main chapters (i.e. years), there are other topics put together like the Ultimate Fighter, the greatest upsets, the one-hit wonders, the greatest knockouts, the Hall of Fame, and even other Zuffa companies like WEC and Pride.

UFC: A Visual History is well done and easy to go through. The index might also be very useful, as you can search through it to find the pages on which a fighter is talked about.

You could only look at the pictures and the main titles, without reading anything else, and still enjoy this 400-page coffee table book. A big thumbs up if you’re a fan of the product.