Although the term is thrown around so much it has almost lost its true meaning, Steve Borden is a true living legend in the wrestling industry.

Growing up in Canada with limited access to regular WCW broadcasts and live events until the 1990s, I never fully appreciated the popularity of Sting until WCW brought its show to the CNE Coliseum in 1990. On that card, Sting fought Vader in the main event and it was a memorable event for any fan in attendance with Sting at his best not only in the ring but outside of it, as he whipped the crowd into a frenzy with all of his trademarked moves and his rock star-like persona. 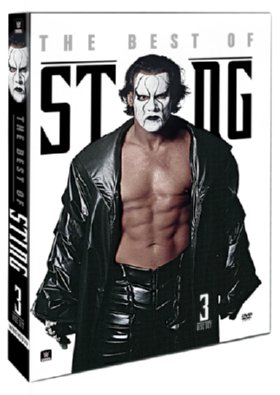 Over the years, my admiration has grown into respect, mostly because of Sting’s work ethic and the incontestable passion for what he does in the ring. Whether he was facing Ric Flair, The Great Muta, Dutch Mantel, “Jumpin'” Joey Maggs or The Gambler; Sting approached those bouts with the same energy, the same dedication and the same excitement.

When it was announced Sting had finally signed with the WWE, I was excited at what the future might hold and how Sting could really shake things up for the better; if he was used in the right way. Maybe the possible dream matches with The Undertaker, Shawn Michaels and other WWE mainstays would finally become a reality. Win, lose or draw, it would be a fascinating journey.

While we all wait to see how the next chapter in Sting’s career plays out, we have The Best of Sting DVD set to pour over.

The three-disc set is more of a primer for the uninitiated than in-depth study of Sting’s career. Beginning with his UWF days teaming with Jim (Ultimate Warrior) Hellwig as The Blade Runners and ending with the final Monday Night Nitro broadcast where he fought Ric Flair, the set is a bare bones offering that hits the high points but offers very little detail or in-depth information.

Sting’s unforgettable feuds with The Great Muta, Big Van Vader, Ric Flair, Cactus Jack, Nikita Koloff and Hollywood Hogan are referenced with very little backstory and one actual match to illustrate things. When the entire WCW video library is at the producers’ disposal, one wonders why the offerings are so skimpy. Sting had numerous great matches with his notable foes and to present only one for each is a big disappointment for those who remember the extent of those rivalries. To not even chronicle Sting’s friendship and feuds with Lex Luger in any meaningful way also demonstrates how insubstantial this collection is.

None of the angles are really explained so there is no sense of how amusingly over-the-top things got in WCW. All we get are highlights. There is no lengthy explanations of the Black Scorpion angle, the White Castle of Fear, the Spin the Wheel, Make a Deal match or other key storylines. We don’t even get to see the famous appearance of RoboCop with Sting in WCW. Everything up to Sting’s transformation into The Crow persona is casually flipped through.

To rub salt in our wounds or spray red mist in our eyes as the case may be, unlike other comprehensive WWE DVD sets in the past, the commentary on The Best of Sting is very, very weak. There are no new interviews with Sting himself, just old footage from the 1990s. There are very few observations from any of Sting’s colleagues, friends or industry insiders. Ric Flair, Tony Schiavone, Vader, Kevin Nash, Kevin Sullivan, Hulk Hogan, Lex Luger and a few others make fleeting appearances and their comments are really pedestrian and not revealing in any way.

Perhaps most surprisingly, many of the matches are culled from editions of Monday Night Nitro, Clash of Champions and WCW Saturday Night. There are some gems to be had though. Sting’s first WCW championship win, his Television title match against Mike Rotundo (with the rest of the Varsity Club in attendance) shows the heights to which not only Sting would climb but also WCW. Two other great finds are the inclusion of his tag team match with The Great Muta against The Steiner Brothers at the second WCW/New Japan Supershow in 1992 and his tag match with Macho Man Randy Savage against The Nasty Boys on a WCW Saturday Night broadcast.

There are just so many notable absences to ignore though. Like his Thunder Cage match with Ric Flair against Terry Funk and The Great Muta at Halloween Havoc 1989 or his Falls Count Anywhere bout against Cactus Jack at Beach Blast in 1992. There isn’t even one match against Lex Luger. The one at SuperBrawl 1992 would have been nice.

With so little detail and so many holes in Steve Borden’s story in The Best of Sting, the set itself can only be recommended to pro wrestling newbies or those who are on the hunt for hard-to-find WCW TV matches. Will there be a more comprehensive set in the near future? Will we ever see the Scorpion Deathlock or the Stinger Splash in a WWE ring? Only time will tell.