Don Manoukian, the original Oakland Raider who turned to pro wrestling, died Tuesday in Reno, Nevada at age 80. He provided one of my favourite stories in The Pro Wrestling Hall of Fame: The Heels. Ray “The Crippler” Stevens was one of his best friends and when Stevens died, Manoukian was asked to delivery the eulogy.

But he didn’t plan right, and almost didn’t make it.

And the funeral itself was a testament to Stevens’ fun-loving ways. 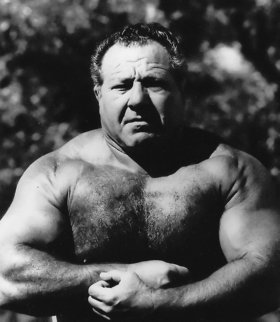 “It was full of cowboys, bankers, doctors, merchants, chiefs. He had a cross-section of friends. It was remarkable, and he was a remarkable guy,” Manoukian told me in 2006.

In true Ray Stevens fashion, Manoukian and his wife were out until the wee hours at a wedding the night before the funeral. Manoukian awoke to the idea that he had to get from Reno, to Fremont, Calif., — a four-hour drive — in three hours. “Somehow we did it. Ah, Jesus Christ, I put my clean clothes and shoes on in the mortuary side of the banquet room, the reception room. What a day. I remember thinking, ‘Boy is this appropriate. This is exactly something that goddamn Ray would do.'”

That Manoukian became such great friends with a character like Stevens is pretty good evidence that he liked to have a good time as well.

Manoukian could have gone on for hours with Ray Stevens stories; and, now that he has joined Stevens in the afterlife, new stories are likely starting.

“First time I met Ray, we’re traveling constantly between L.A. and the San Francisco territory. I was a bachelor. I thought he was a bachelor. We were having a great life,” reminisced Manoukian. “About two months into the relationship, he hits himself in the head one time, and said, ‘Jesus Christ, I forgot to call my wife.’ I said, ‘Holy Christ, are you married?’ He said, ‘Yeah.’ I said, ‘How long have you been married?’ He said, ‘All my life.'”

How about another one, Don?

“One time we came back from a trip, and Theresa was bowling. She was at a bowling alley,” he began. “Ray was a terrible husband, but he was hugely jealous. He follows her and the guy that gave her a ride to the bowling alley. It was pretty platonic, as I sincerely believed. Goddamn Ray, he runs him off the road. I’m with him. He runs him off the highway, and beats the sh– out of the guy, and throws Theresa in our car, and away we drive. He left the guy out like a light in his car. Two days later — that was a weekend, like a Saturday night — like Monday night, or whenever we were working, within the next day or two following, he says, ‘Remember that guy I hit?’ I go, ‘Yeah?’ He said, ‘He died.’ I goddamn near blacked out, holy Christ I’m an accomplice. The guy was fine. The guy came through and got stitches, but he was fine. Ray tells me the guy died, and of course, I believed him. … Jesus Christ, what a rib.”

The actual football and wrestling career of Manoukian was documented in an earlier story here on SLAM! Wrestling — Manoukian shunned football for ‘rasslin, and the obituary on the Reno Gazette-Journal website covers a lot of his business dealings — so why not continue with the stories?

Consider how he summed up his partners in an April 2001 in the Ring Around the Northwest newsletter: “Some of my favorite tag team partners were Ray Stevens, Dick Beyer, Red Bastien and Kurt von Poppenheim. We were all partners at one time or another, traveled thousands of miles together, split good and payoffs and drank warm and cold beers.”

How about San Francisco promoter Roy Shire? “Roy Shire couldn’t lick Tom Thumb the midget, but he talked tough a lot and he spit a lot. Spitting enhanced his machismo, I guess. He spit all over. He’d be talking to the Queen of England, and spitting on her shoe probably,” he laughed. “[Roy] was not a fuzzy, warm guy that you’d hang out with.”

A rib on “The Alaskan” Jay York: “He was a great big kid, the Alaskan. Ray [Stevens] sent him in to a motorcycle shop one time to buy a can of compression. The guys, of course, got a big laugh down there at the Harley shop.” 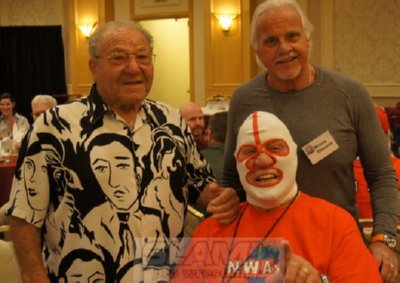 Successful in business in Reno post-wrestling, there is no doubt that Manoukian valued his time in wrestling and hanging around with the wrestlers: “They’re one of a kind, absolutely one of a kind. They are quite a fraternity. But when it was over, I didn’t intentionally distance myself, I just did other things,” he said. “It’s funny how you get into your life after you’re away from the guys. You think about them but you get tied up in your family and in your business.”

He went to the Cauliflower Alley Club reunions a number of times. The last time I saw him was two years ago, in Las Vegas. The matches were going on at the Gold Coast Hotel and Casino, and I was tasked with taking the microphone around and introducing some of the people in attendance and getting them to say a few words.

Given his age and the era he worked, it’s a certainty that few recognized Manoukian when he came into the room with his son.

Almost immediately, I introduced him, and let him say hello to the crowd.

And now, after his death in a Reno hospital after a short illness on September 23rd, we say goodbye.

Funeral arrangements are not known at this time. He is survived by his brother, Noel, sister, Jackie, his son, Dirk and his wife Molly, and their children, Jake and Kate.