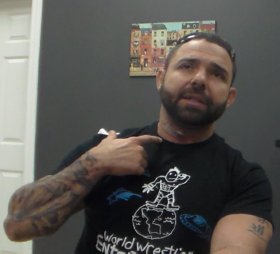 TORONTO – On September 17th, Santino Marella tweeted “Surgery was a success, road to recovery starts now.” A week later, at his gym in Mississauga, Ontario, he shared further details about his surgery with SLAM! Wrestling.

The surgery was done in Pittsburgh, under the care of Dr. Joseph Maroon, the neurosurgeon for the Pittsburgh Steelers.

Santino Marella shows off the incision in his neck. Photo by Greg Oliver

“We did a two-level fusion, which means that we took three discs and essentially made them one disc,” began Santino Marella, very much in his more sedate real personality of Anthony Carelli, his neck sporting a decent-sized bandage on the left side. “It’s pretty interesting what they do. Imagine a Big Mac and the patties are bad, and the buns are okay. So what we do is we take out those bad patties and we put in more bun. Essentially you now have one solid piece of bun, which is my bones.”

The fusing needs something to adhere to. “They put in some piece of tibia from a donor, a cadaver’s leg bone, which is the same diameter of your vertebrae. So that, with a titanium plate holding everything in place, hopefully they just heal and lock on and grow together and become one piece. Then we’re out of immediate danger.”

There was another complication as well.

“I had a bone spur pressing against my spinal cord. It even broke off and it was just sitting there, so we were one bad bump away from some serious damage. We’re out of the woods. It’s obviously stiff. The hard part is I can’t do anything. I can’t lift more than five pounds. But I still try to keep busy around the gym and clean up a little bit.”

While sharing the story, Carelli makes a remarkable effort to keep his body still. But he has found it frustrating to be so limited, and has also found it hard to concentrate, especially when around his Battle Arts Academy, where he used to be quick to help out clients or demonstrate proper technique or moves, whether it’s mixed martial arts, judo, boxing or pro wrestling.

What’s the timeline for a return to health?

“I can start riding the bike in a couple of weeks, and then maybe a month after that, some light weights. Then I’ll be able to exercise. I just won’t be able to do any falling. If I can get back into the ring, that’ll be in six months’ time.”

He is decidedly optimistic, but also realistic.

“There’s no guarantee that I’ll be back, but there’s definitely a possibility.”

Santino Marella does expect to be back on WWE television in a while.

“In the meantime, I should go back to work in about a month and I’ll just be doing a non-physical role for the next five months or so, until I’m ready to go,” he said. “It’ll be interesting how I transition back to the ring; hopefully they do something cool.”