Angelo Mosca to be celebrated at massive August event

There’s a lot of love out there for a guy who was nicknamed “Big Nasty.” Such is the legacy of Angelo Mosca, the football and pro wrestling legend, who was recently diagnosed with Alzheimer’s.

Mosca who is being feted by family and friends at the end of August.

The charity fundraiser known as STILL MOSCA goes down on Wednesday, August 26, 2015.

The event was initiated and is being driven by the Mosca family.

Angelo Mosca Jr., who briefly followed his father in pro wrestling, admitted the event has exceeded his expectations, still more than two months out. 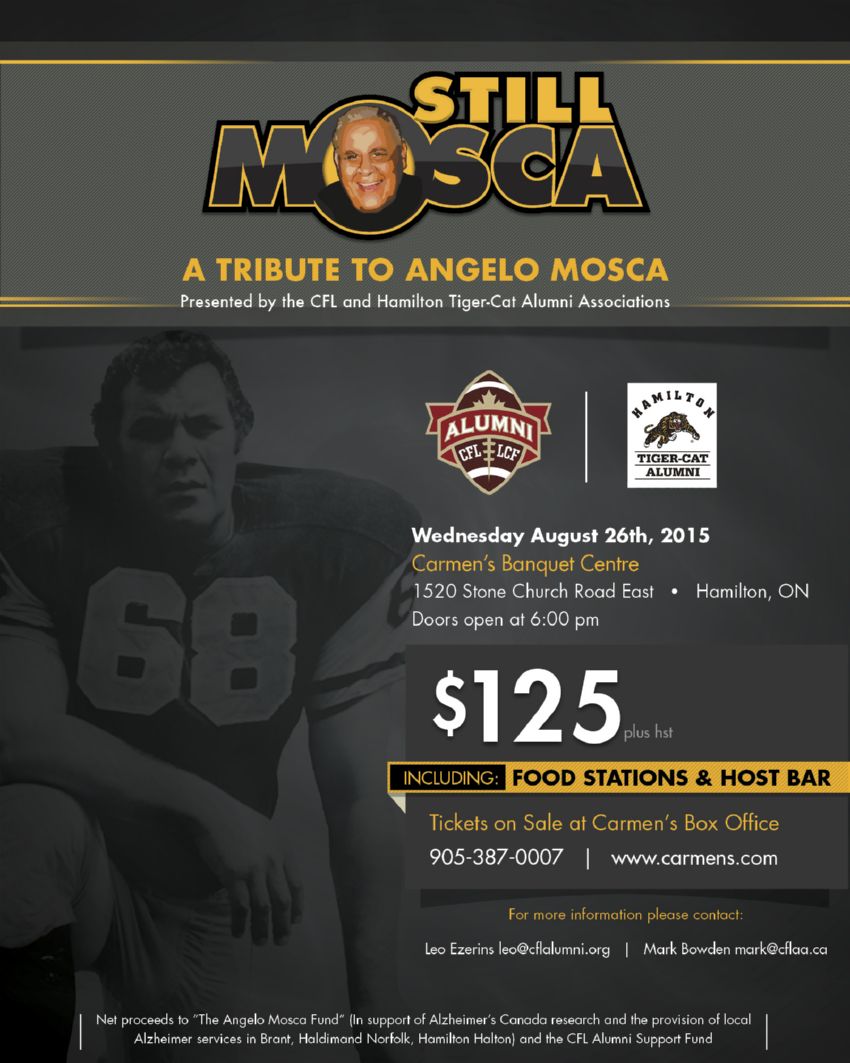 From a wrestling perspective, it doesn’t come much bigger than “The Nature Boy” Ric Flair, who has committed to coming up the event for his old pal, Big Nasty. Looking back at Starrcade 1983, it’s Mosca who carries Flair around the ring after “Naitch” defeated Harley Race for the NWA World title. Others will be confirmed as time goes by, said Mosca Jr. Some, like Blackjack Mulligan, have health issues, but have promised to do up video messages for Ang.

Football fans will be able to mingle with Joe Zueger, Bob Krouse, Bill Danychuk, Mike “Pinball” Clemons, Peter Dalla Riva, and Terry Evanshen, and five-time Canadian heavyweight boxing champion George Chuvalo will be there too — and again, more names will commit. The CFL’s Hamilton Tiger-Cats have thrown all its support behind Still Mosca, and will be hosting Angelo Mosca Night at their home game the following night.

Proceeds from the event will be donated to The Angelo Mosca Fund, in support of Alzheimer’s Canada research and the provision of local Alzheimer’s services in the Hamilton area, and a portion of the funds earmarked for the CFL Alumni and Ticats Association to assist members in need.

The event will be held at Carmen’s Banquet Centre in Hamilton, which has a rich history all its own.

“I can’t believe what the kids, Helen my wife, and the community are doing,” said Mosca Sr. in a press release. “It has brought out a great deal of emotion looking back at my life. I am very excited at seeing a few old friends with new teeth.”

“We are really looking forward to sharing an exciting fun-filled evening with family, friends and the community as we pay tribute to our dad,” added Mosca’s daughter Jolene in the release. “The Still Mosca event is to honour, not just his incredible careers but also his selfless contributions to various charities and services.”

Mosca Jr. has been involved in some of the video production for the event, sitting down with his father, trying to capture the memories on camera.

His dad’s long-term memory isn’t terrible, said Mosca Jr., who conceded he has had to help him along with the story on occasion. 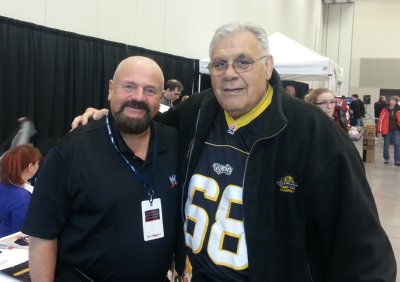 Long out of the wrestling business, working at a youth custody facility, Mosca Jr. had drifted away from old grappling buddies and has enjoyed catching up — but is saddened too by the passing of so many people he knew, like Dusty Rhodes.

“I’m learning more about him from some of the other people I’ve been contacting,” Mosca Jr. chuckled. “Even when we traveled together, and I was wrestling with him, you didn’t talk about stuff like that. It’s just you’re on the road. I’m a very quiet, introspective guy. We just traveled.”

Tickets for Still Mosca are $125 plus HST and are on sale now. General admission tickets are available through the Carmen’s Box Office by calling 905-387-0007 or by visiting tickets.carmens.com to purchase online.

For those unable to attend. donations can be made directly to the Angelo Mosca Fund here. You will be issued a tax receipt through Canada helps.

Greg Oliver will be going to Still Mosca — come meet me there! Greg can be emailed at [email protected], and you can follow him on Twitter @gregmep.