Among old wrestling territories, Montreal was hardcore before “hardcore” was cool. 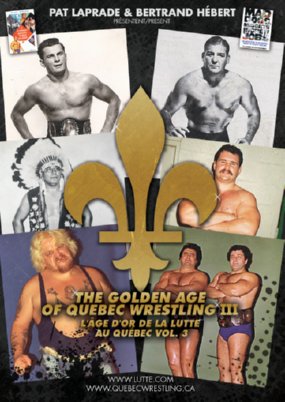 The blood-spattered region comes to life once again in the latest DVD release in the series, The Golden Age of Quebec Wrestling Volume 3, presented by wrestling historians and occasional contributors to this site, Pat Laprade and Bertrand Hebert.

Like The Golden Age of Quebec Wrestling Volumes 1 & 2, this compilation of matches from some of the biggest names to emerge from Montreal and the province of Quebec is the perfect companion to the book Laprade and Hebert co-authored, Mad Dogs, Midgets and Screw Jobs, along with their new biography, Maurice “Mad Dog” Vachon.

Digging even deeper into the Montreal territory’s past, Volume 3 is packed with wild and bloody brawls featuring the likes of Paul and Jos LeDuc, the Long Riders, and the Rougeaus.

The DVD opens with a couple black-and-white backstage clips, produced by Briston Films Limited, of Yvon Robert preparing for his match with heavyweight champion Killer Kowalski. After an extensive workout, a doctor checks Robert’s blood pressure as the film narrator comically quips, “At least one of the competitors has a heart.”

The historic footage is followed by a 2-out-of-3 falls bruising battle between Kowalski and Robert. Before a packed house in Montreal Stadium, Robert dazzles the audience with his smooth mastery of holds and folk-hero charisma, while Kowalski mauls him with his long arms and meaty paws, using nefarious tactics every chance he gets.

Another match from Montreal while Eddie Quinn was the head promoter is between Johnny Rougeau and Len Mantana. A beast with a formidable bearhug and clubbing fists, Mantana is all over Rougeau early on until the French-Canadian fights back with a spectacular dropkick that almost knocks himself out. Captivating the red hot crowd for practically the entire match, it’s not hard to see how Rougeau, a ring general with rugged good looks and a hard-hitting style, had what it took to make an indelible impact on the business, later running the Montreal promotion and feuding with the Vachon brothers’ Grand Prix Wrestling in the ’70s.

Next up are a handful of wild brawls from Grand Prix, featuring Billy Two Rivers, Gilles Poisson, and a young, clean-cut Sailor White, looking nothing like his bedraggled image on the DVD cover. With vicious southpaw punches, leaping elbow drops and kicks, White along with his tag team partner, the masked martial arts expert UFO, bust the heads of an 18-year-old Richard Chartrand and the 300-pounder Gigi the Greek.Like the previous DVDs, there’s plenty of English commentary throughout Volume 3, alternating with French commentary and interviews with the likes of Dino Bravo, Pat Patterson, and Paul Vachon, the latter of whom shares some family history, speaking of his 12 brothers and sisters.

The interviews throughout this Grand Prix footage offer a ton of historical insight into the culture of the Montreal territory from this era, like a brief reference to “Sur Le Matelas,” a hockey team of wrestlers who played at the Forum in 1969 that included Paul and Jos LeDuc, Ivan Koloff, Hans Schmidt, Jacques Rougeau, and many others, including Eddie “The Brain” Creatchman as coach.

The English commentary sheds some light on the popularity of the French Grand Prix program at the time, seen on CKMI Chanel 5 in Quebec City, receiving high TV ratings and big box office gates at the Coliseum.

In Southern Ontario, Grand Prix was broadcast in Burlington, Barrie, and on City TV in Toronto, along with Northern New England in the United States, the commentator informs. During one match, it’s interesting to hear one of the colour commentators anticipate some upcoming joint promoting with “New York City promoter Vince McMahon in New York State.”

But the highlight of the Grand Prix segment of the DVD is seeing LeDuc, a beloved fan favourite in Montreal, in a match with Zarinoff Leboeuf, as he remarkably picks Leboeuf up like a baby to deliver a devastating side-arm backbreaker, nearly breaking him in half.The video quality is amazingly clear and the sound superb, given the age of the footage, making these old matches with LeDuc, George Gordienko, and The Destroyer (not Dick Beyer) so much fun to watch.

Like the previous volumes, the majority of the matches come from Lutte International, where the footage has also held up quite well, with the exception of a rare match of Nick Bockwinkel wrestling in Quebec against Bravo, which is quite snowy but still watchable.

Featuring some of the most out-of-control bouts to come out of Eastern Canada in this era, one of the gems of this compilation is Jimmy Snuka versus Bravo, filmed with a handheld camera. Feeling much like a concert bootleg, this rare house show footage puts you right in the red hot crowd a few rows up in the stands, as individual voices can be clearly heard screaming throughout this back-and-forth barnburner of a match with an emotional ending.

There’s also a fast-paced and physical match between Samu and Sgt. Slaughter joined in progress and filmed with one camera between the bottom and middle ropes, looking very much like old Mid-South Wrestling house show footage from the ’80s.

With commentary from Milt Avruskin, the voice of International Wrestling, along with Gino Brito, this footage brings back a lot of warm nostalgia, as Samu’s flying headbutt was a thing of absolute beauty, while the Slaughter Cannon was every bit as devastating as any “clothesline from hell” today.

The DVD is also packed with some great technical wrestling, like the scientific match between Bockwinkel and Tom Zenk. Then there’s the fiery confrontations and memorable bouts with Rick Martel against a long list of nefarious foes like Stan Hansen, Michael Hayes, and Jimmy Garvin.

Polynesian wrestlers are represented well on Volume 3, with the high-flying Prince Alofa (Rikishi) defending his International Wrestling Television Championship against Sheik Ali, and the Wild Samoans, Afa and Sika taking on the hometown fan favourite Brito, and Tony Parisi from Niagara Falls.

As the DVD begins to wind down, Laprade and Hebert throw in a violent and bloody chain match between Kareem Mohammad and Abdullah the Butcher, the Texas Brass Knuckles Champion, previously released on the 1980s VHS tape, Butchermania: The Best of Abdullah the Butcher Wrestling Massacres.We also get some fun, high-flying action from a young Shane Douglas, wrestling as a fan favourite under the name, Troy Martin, against veteran wrestler and former pro football player, Bob Delaserra, who the commentators put over as a top ranked amateur wrestler in Canada who has wrestled all over Europe (and who was the masked UFO).

As an added bonus, Laprade and Hebert fittingly conclude Volume 3 with “Farewell Vachon,” a touching tribute to Mad Dog Vachon, who rides out to the ring on the back of a golf cart with beautiful women on either side. Before a lively crowd in Montreal, Vachon is presented with numerous items including a plaque-mounted newspaper cover story, a championship belt, a VCR, a vacation package, a Quebec Nordiques jersey with “Mad Dog” and number 57 on the back, and a beautifully painted portrait.

It’s a fitting and fun way to end the journey, celebrating the legacy of Mad Dog Vachon, the history of pro wrestling in Quebec, and the indelible impact the Montreal territory made on the sport. Like the research they did for their books and previous DVDs, Laprade and Hebert did a formidable job putting together Volume 3 of The Golden Age of Wrestling in Quebec, in what might conclude the series.

Let’s hope it’s not the conclusion, though, since Montreal was not only hardcore, but one of the most fascinating and influential territories in wrestling history, and well worth re-living.