The rocky road to publication — twice — for ‘Mad Dogs, Midgets and Screw Jobs’

One of the eternal debates within the wrestling community has been which territory has the richest history. Arguments can be made for New York, Chicago, St Louis, San Francisco, Los Angeles, Detroit and Toronto, amongst others, but Montreal was one of the best. So what would make two writers and superfans write a book about it?

According to Bertrand Hébert, co-author of the recently published book Mad Dogs, Midgets and Screw Jobs: The Untold Story of how Montreal Shaped the World of Wrestling with Patric Laprade, the answer is easy: “No one had ever written a book on the history of wrestling in Quebec, and the only books written were about either individuals or wrestling families, not about wrestling as a whole in Quebec.” 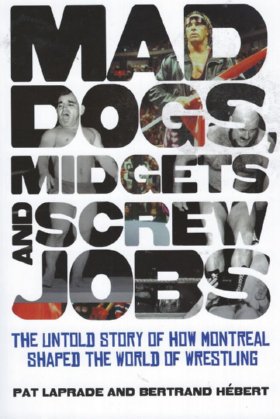 Their passion for wrestling has a long history that started in their youth. Hébert used to watch Superstars of Wrestling on television and in December ’81 begged his father to take him to Centre Paul Sauvé so he could see his first live event. He was hooked. Laprade was six years old when he first watched wrestling on a Sherbrooke television station and he attended his first live card in 1983. He was hooked too.

But watching it on television or attending live events wasn’t enough for either one. They both wanted more and both dove into indy wrestling so they could learn about the business.

Hébert became friends with well-known Quebec indy wrestler/promoter Frank Blues. In 1993, Hébert got involved with Blues’ Lutte Lanaudiere (which became NCW and is still going strong in Quebec) as a referee, manager and then for eight years, as its booker. Hébert was also, for many years, Quebec’s correspondent for Pro Wrestling Illustrated, sending in the show results, and was instrumental in getting Quebec wrestlers ranked in its top 500 listing.

Laprade wrote wrestling articles on a Quebec-based internet site run by his friend Phil Leclair when he started working for Paul Leduc’s promotion called the FLQ. Leduc, half of the famed Leduc brothers team with “brother” Jos, and Ludger Proulx, wrestlers and promoter of the ICW, taught Laprade the most about the wrestling business. He learned working backstage and around the ring as a manager and announcer. Since 2007, Laprade has also been contributing occasional articles for SLAM! Wrestling.

Hébert and Laprade first met in person when they were working for ICW. They then worked together again with the FLQ, Bertrand as the booker and Patric as his assistant. Their friendship was instant.

According to Laprade, what made their connection so great for writing this book was the fact they are so different: “Here I am, a 30-something single guy, and Bertrand, early 40s, husband and father, complete opposite but each other’s weakness is the other’s strength.”

It was Laprade who had the initial idea to write a book back in September 2008 and got the late Michael Ryan, of IWS fame, to start helping him. However, because of Ryan’s heavy involvement with the Young Cuts Film Festival, he had to back out. 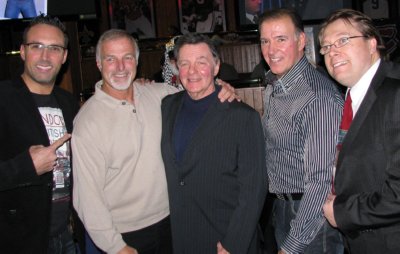 Figuring that an ambitious book on the history of Quebec wrestling couldn’t be done alone, Laprade turned to Hébert. He sent him an email asking for his knowledge and cooperation, and Bertrand quickly answered with a resounding yes. Hébert started by collaborating on a few chapters but soon was in full blast along with Laprade. Since then, it has been a second full-time job for both to write this book — and now to promote it. Knowledge is great, but not good enough though. If you want your book to be as true to reality, you have to double and triple verify all the stories you get from anyone. Many trips to library and newspaper archives, along with many, many interviews with retired wrestlers or surviving spouses were necessary to authenticate each story. There were many contributors to the stories but some of them went above and beyond starting with Gino Brito Sr. and Raymond Rougeau who gave many hours and stories, or were able to confirm what Bertrand and Patric had heard from other sources. Paul Leduc contributed many tales and hundreds of pictures, and Rick Martel and Pierre Carl Ouellet also gave many hours of help. Their traveling to research the book one day took them to the Baillargeon brothers wrestling museum and to their stunned faces, were not only given full access on a day the museum is usually closed, but were even loaned many one of a kind DVDs for their research, with the old fashioned “just bring it back when you’re done” agreement. They were also the last ones that were granted a one-hour interview by Edouard Carpentier before his death.

With the history of wrestling in Quebec going back to the 1900s, there was a lot of ground to cover.

To their surprise and disappointment, after completing the book, French Canadian publishers told them their book was great and the research superb, but all felt it wasn’t going to be a money-maker and declined to publish the book in French.

Toronto-based ECW Press came through, and asked them to send a few chapters in English, and shortly thereafter, the news came out that ECW Press was in on the project. Up next was the difficult process of translating the book; after that was done by a professional translator, the unique wrestling terminology had to be re-inserted in places. Only after a Montreal book launch in February where television, newspapers and radio was in force and many retired wrestlers and both TV and radio personalities were there to support that a French Canadian publisher based in Quebec, Libre Expression, part of Quebecor (which also owns Canoe.ca) came through. The book will be published in French this Fall.

Hébert and Laprade’s goal is not to get wealthy, but rather to make sure everyone knows about the rich history of wrestling in Quebec and the timing was right as many contributors were still young enough to help for the most part. Also, because of the well known changes in this wonderful sports entertainment business in the past few years, you can never forget about the roots of the business.

So which territory is the most important in wrestling history? We will never get a definitive answer but Montreal certainly had a major role and is often a misunderstood part of the wrestling business. This book will change that, giving a voice to a forgotten era.