‘Speedball’ Mike Bailey is on a roll

People love to root for the underdog, especially an underdog who refuses to stay down. Quebec’s Speedball Mike Bailey just might be the ultimate wrestling underdog. And instead of staying down, he’s flying high. 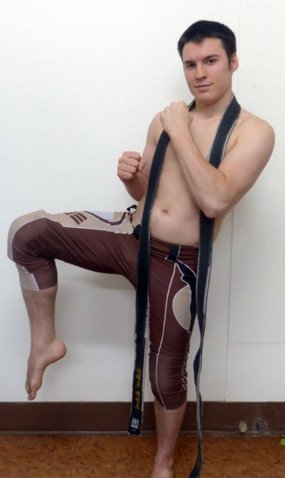 Bailey, born Emile Baillargeon, doesn’t fit the stereotypical wrestler mold. He stands 5-foot-8 and weighs in at 175 pounds. But to Bailey not looking like a typical wrestler isn’t an issue because his goal is to be anything but typical in the squared circle.

In the ring, Bailey utilizes his Tae Kwon Do skills, which he has been dedicated to since he was 12 years old and currently holds a fourth degree black belt, and his natural acrobatic ability to set him apart from other wrestlers on the indy scene. If you haven’t seen him wrestle in person, a quick YouTube search can give you a taste of his matches and arsenal which features a flurry of kicks, a standing shooting star press, running corkscrew shooting star press, a standing moonsault knee drop and a standing moonsault fallaway slam. This last move, a unique display of using an opponent’s momentum against them, is a must see.

Bailey was given the name Speedball by Michael “Llakor” Ryan, the late writer and publicist for International Wrestling Syndicate (IWS), after he commented that Bailey bounced around the ring like one. The name Bailey is derived from an English version of his surname. He had wanted to originally go by Miles Bailey, since Miles is the English version of his first name, but there was already a wrestler named Miles on the show, so he went with Mike instead.

“There really is no character,” offered Bailey. “I try to mostly be myself in an exaggerated way which is probably the correct way to do pro wrestling. I essentially, whether I am a good guy or a bad guy I pretty much just kick people. And if they like the person I am kicking, typically they hate me. If they don’t like the guy I’m kicking, then they typically like me.”

Bailey caught the wrestling bug at the age of seven while watching World Wrestling Entertainment and seeing a storyline where the wrestler, Kane, was attempting to light The Brood, a vampire/goth faction, on fire. Bailey was struck by how the wrestlers were entertaining thousands of people, having fun and getting paid for it. He knew then that he wanted to be a part of professional wrestling.

Eight years later, at the age of 15, Bailey got his introduction into the business by practicing and improvising matches in the ring before Montreal Wrestling Federation, later MWF Promotions and now Monteregie Wrestling Federation, shows. While he never took any formal wrestling classes, his brother and sister were trained through IWS and shared their knowledge with him.

“My first match was with MWF,” revealed the 24-year-old Bailey in a phone interview. “My first probably four matches were me getting beat up because that’s what you do with a 15-year-old who’s barely trained, but wants to be on the shows. But it’s a good way to learn. It’s better to learn in front of the crowd. That’s the most important part.”

Bailey adds, “I was nervous and I still am every time I wrestle. There would be a problem if I wasn’t.” 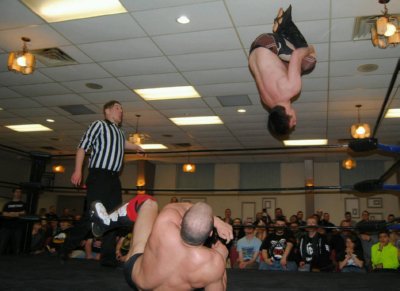 You have to look up to see Speedball a lot of the time. Photo by Jason Barker.

In addition to MWF, Bailey worked with the Federation de Lutte Quebecoise (FLQ) for the first three to four years of his career. He then moved on to C*4 Wrestling and IWS.

“I remember the match Bailey was originally supposed to have for his debut was a three-way, and at the last minute it became a singles match with Player Uno,” recalled Mark Pollesel, creator and booker for C*4 Wrestling. “I remember Uno’s attitude going in was he really wanted to help showcase what he knew Bailey had to offer, having seen it during his Quebec days. I think I went in just expecting to see the debut of a new high-flying cruiserweight who could offer something different to C*4. What I walked away with after seeing that match was knowing that he was so much more than that. Bailey had a ton of potential to be a top-level star in independent wrestling, especially in C*4.”

“The first time he debuted for us,” remembered Manny Eleftheriou, IWS promoter. “I’ll never forget it. He showed up at the venue and everybody was going over what they were going to do that night. And he was in the corner jumping rope and doing all these martial arts drills. I was just looking at this guy and I was like, wow! It was like he was prepping for a UFC bout. It goes to show you he takes this very seriously. And now he’s getting the bookings, he’s traveling the world. He’s doing well for himself.”

Bailey, who is currently the IWS Champion, indeed takes his wrestling career seriously. He limits his alcohol intake, doesn’t smoke, doesn’t do drugs and is conscious about his nutrition.

“When I think about going to get a giant burger or something,” remarked Bailey. “I think well that burger might taste good, but tomorrow my training will be bad because I’ve had a burger. Most of the time I want to train more than I want to have a big burger.”

Bailey would solidify his status as an underdog favorite with a match for C*4 against fellow Canadian, Kevin Steen (currently wrestling as Kevin Owens for the WWE’s developmental promotion, NXT). Bailey received a brutal beating complete with a bloody and bruised chest. According to Pollesel, a loved one of Bailey’s cried for the entire match. Members of the crowd and the commenters kept pleading for Bailey to “stay down,” but he refused. The match lasted under 15 minutes and at the culmination Steen was victorious and the audience was on its feet.

Working with Steen has been a highlight of Bailey’s career. The two even wrestled for Steen’s last match for C*4, before he headed off to NXT. Bailey is thrilled that Steen’s career is taking off. 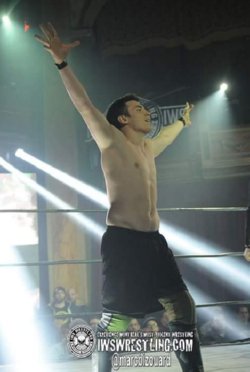 “I think it is a long time coming,” expressed Bailey. “I think it is great for a guy like him who doesn’t fit the mold, but is obviously good and is having great success. I think it is good for wrestling, it is opening it up for people who can put on a better show than guys who are 6-foot-9, 270 pounds and on steroids.”

Steen is set to face John Cena at this Sunday’s WWE Elimnation Chamber pay-per-view. Bailey admits that Cena is his dream opponent. When asked why, Bailey immediately laughs and says, “Well, because if I’m wrestling John Cena that means I’m doing very good!”

Bailey currently wrestles two or three shows each weekend while also studying work and union laws in university. His goal is to make a good living being a wrestler.

“I think it is getting more and more possible now a days off indy wrestling,” stated Bailey. “Wrestlers are making more and more money, so I just want to travel. I’d love to tour Europe and Japan eventually.”

Bailey knows the ticket to fuller pockets is to get to the WWE, which he is indeed interested in, but his heart lies in the indy scene.

“If I could make the same kind of money I could on TV while still wrestling on the indy circuit, I would love to do that,” he confessed.

Bailey continues to impress with matches in C*4, IWS and also California’s Pro Wrestling Guerrilla (PWG), Philadelphia’s Combat Zone Wrestling (CZW), Toronto’s Smash Wrestling (a place he received a “please come back” chant from the crowd) and this weekend he will debut for EVOLVE. Bailey will face TJ Perkins on May 30 in Queens, NY, and long-time opponent, Biff Busick on May 31 on Long Island. 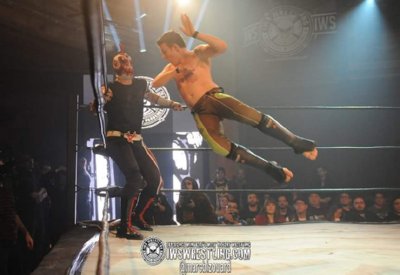 “This is going to be my approximately seventh match with Biff Busick in five different promotions,” furthered Bailey. “We both have a style that tries to get away from the classical pro wrestling and all the things people have seen before, all the pro wrestling clichés. We want to get away from them and make something that’s really about us and our styles and trying to tell stories that way instead of going with the norm.”

Gabe Sapolsky, the promoter for EVOLVE, knew he wanted to bring in Bailey after seeing his uniqueness in person at a CZW show.

“In the ring, he jumps right at you because no one does the stuff he does,” wrote Sapolsky in an email. “I’ve seen it all from my time in ECW to ROH to FIP to DGUSA to EVOLVE and he does things I’ve never seen before.”

It seems unanimous that Bailey has a promising future ahead of him.

“(His future is) very bright,” expressed Sapolsky. “He’s going to be on a different road than most due to his style and look, but I see no limits on how far he can go and it’s going to be a fun road to be a part of and watch. I’m very much looking forward to seeing how Mike develops.”

“I think he is going to become the King of the Indies very soon,” predicted Eleftheriou. “I think within a year he’s going to be the guy that every promotion is booking in the United States.”

Added Pollesel, “You don’t have to be a muscle-bound freak to be considered dangerous and I think Bailey is a perfect hybrid of what the future of wrestling is.”