There’s a whole lot of facts in Pro Wrestling FAQ 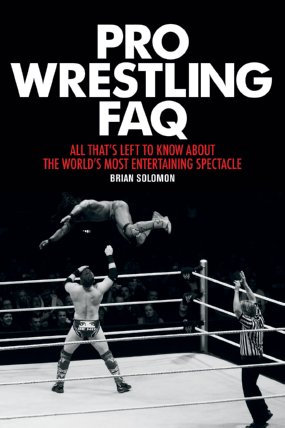 Writer Brian Solomon’s hefty tome entitled Pro Wrestling FAQ: All That’s Left to Know About the World’s Most Entertaining Spectacle is an exhaustive, but not exhausting read, about the history of professional wrestling and its impact on our culture.

The book effectively covers the gamut of pro wrestling; from kayfabe to shoots, gabbers to grapplers, triumphs to tragedies, the big time and the independents and everything else in between. While definitely not a book you could read in one sitting, it is a great read for fans who want to enhance their pro wrestling knowledge and/or ensure victory in a pro wrestling trivia contest.

Solomon is not your average wrestling fan, or writer for that matter. Currently residing in Connecticut and employed as an English teacher for the public school system, he also has seven years of previous experience working for World Wrestling Entertainment (WWE). Solomon started as a copy editor in the publications department and eventually worked his way up to Senior Editor.

“When I first went in there, I didn’t want to appear to be an over-the-top mark,” recalled Solomon in a Skype interview discussing his interview process with the WWE. “But I was! I didn’t want it to be too obvious. I had heard that they don’t like that very much, but I also didn’t want to seem like I had no idea what I was doing. The first time I interviewed, I played it down. They asked me if I was a fan and in my head I’m screaming, ‘Yes! I can name every world champion through George Hackenschmidt!’ But I played it cool saying, ‘Yeah I watch it every now and then.'”Solomon says that his first five years with the WWE were amazing and a dream come true. But for his final two years the old saying, Be careful what you wish for, became an unfortunate reality. Solomon’s then-boss, someone he describes as a wrestling fan, newspaper veteran and someone who really looked after his staff, was fired due to a contentious relationship with Shane McMahon (son of WWE Chairman, Vince McMahon). Solomon and the other writers then found themselves reporting directly to McMahon.

“As much as Shane could be cool to work for, he could also be difficult to work for,” revealed Solomon. “And when you are working directly for the McMahons, you feel that your time is limited.”

Solomon felt passed over when he was not promoted to the position of Editor-in-chief, a spot he says that he was already doing without the official title. He says the WWE brought in magazine industry people from New York, who were not wrestling people, to revamp the magazine. The work culture changed, long-time employees were phased out, and Solomon knew his days were numbered.

“They kept me around because I had a lot of product knowledge and I had a lot of contacts in the company,” Solomon stated. “I was very well known and well liked, but they were looking to phase me out as well. I started to become very bitter and I certainly gave them enough rope to hang me with in the end and it was just not pleasant in the end. I was glad it had ended because even though, they had let me go, I felt I had gone as far as I could go. I was never going to get the Editor-in-chief spot and I was going to be forced to work with people I didn’t want to work with on a product that I was no longer proud of.”

The WWE’s loss is the reader’s gain as Solomon was able to use knowledge gained while on the job, exceptional research skills, contacts and his archive of wrestling interviews to complete his new book.

“Even though I am not going to reuse stuff that has appeared in WWE publications, I still have so much surplus that I didn’t use, that I was able to draw on,” divulged Solomon. “I did the last interview that Lou Thesz ever gave before he passed away. I did the last interview that Randy Savage ever gave the WWE before he passed away. I have comments from Chris Benoit talking about his family that he gave to me personally. There’s no other book that is going to have stuff like that because it happened to me personally. I also did two multiple-hour interviews with Vince McMahon and he gave me insight into his family history that I don’t think has been seen anywhere, that I was able to draw on.”

One of the aforementioned interviews with McMahon occurred in preparation for a magazine commemorating the 10th anniversary of Monday Night Raw. Due to terrible traffic, Solomon ended up interviewing McMahon during a three-hour limo ride. It was the first official meeting between the two.”I remember him being on the phone with a member of the booking team and him saying, ‘We need better heels,'” recalled Solomon in his best Vince McMahon voice. “‘We need stronger heels on the show.’ I remember thinking that every Internet smart mark would cut off their hand to be able to sit here listening to him have this conversation about booking Raw and Smackdown. I can’t think of a more memorable experience working at WWE.”

But there is a downside to having the WWE on your resume. Solomon admits he did worry about being accused of bias while he was writing the book. In fact the publishers originally wanted the book to be called, WWE FAQ. Solomon successfully talked them out of it to avoid bias and the WWE’s legal team and to open up the possibilities of topics he could cover. Even with all his efforts, Solomon admits that writing the WWE chapter in his book was the most difficult of all the chapters.

“The challenge was getting it right and not being, ‘Oh here’s the WWE guy, let’s hear what he has to say on the WWE,'” remarked Solomon. “I wanted to get it right and provide some unique insight. I didn’t want it to be something people have already read. I tried to give a unique angle to that chapter. It has a lot of moving parts. It’s not just your standard, ‘Here’s the history of the WWE.'” 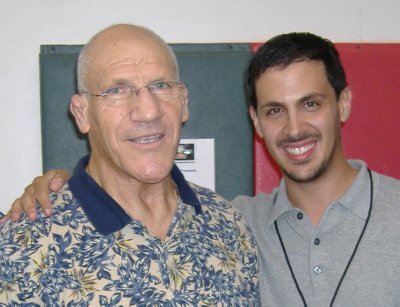 After reading Solomon’s book cover to cover, one can’t help but applaud and appreciate the amount of work, research and respect that went into it. This book was clearly an unbiased labour of love. Solomon also bolstered his writing with insights garnered from interviews with top names in wrestling journalism including Dave Meltzer (who also wrote the book’s foreword), Bill Apter, Mike Chapman, and SLAM! Wrestling’s own Greg Oliver.

There were many times while reading that I was reminded of certain wrestling factoids or moments in history. There are two examples that stick out in my mind. I have always wondered about the muscular fan with glasses who could be seen in the audience at several wrestling pay-per-views throughout the ’80s. According to Solomon, the name of this super fan is Vladimir. I was also reminded of how when I was a kid, my mom saw some scantily-clad ladies in an apartment wrestling pictorial in one of my wrestling magazines and was so outraged at it that she thought I should never buy an issue again. This book is a great refresher and also serves as a way to fill in any gaps of knowledge that one may have in this subject.

As for criticisms, there were a few things that I felt Solomon missed — though I did learn from him during the interview that he had to cut about seven chapters from the book including ones on wrestling magazines, wrestling books and movies, merchandise and famous arenas. Solomon also says that he would like to do an expanded second edition of this book because it is practically already written.

I felt that chapter on wrestling scandals and controversies should have included the death of 18-year-old Janet Boyer-Wolfe, which happened during a tag team match and to many is considered to be one of the worst tragedies in the history of women’s pro wrestling. I noticed that the women’s wrestling promotion, SHIMMER, which has been the training ground for many female wrestlers and the scene of countless unbelievable matches, was not mentioned in the chapter on the independent wrestling scene. The late Ultimate Warrior is also noticeably absent amongst Solomon’s choices for best promo deliverers. Finally, I would have liked to see some space dedicated to the Cauliflower Alley Club, an organization that has been beneficial to past, present and future wrestlers.

Solomon himself points out that the process of writing a book moves so fast and it is a medium that does not allow one to be completely current. He says he finished the lionshare of the writing in August 2014, so he does not mention the promotion Lucha Underground in the book, which he feels is on its way to becoming the number two wrestling company in America. He also wishes he had mentioned the WWE’s developmental promotion, NXT, more but it had not yet become the phenomenon that it has become in the last year. Solomon also thought he was being rather forward thinking by including a special profile on Roman Reigns, whom he thought was going to be the next main eventer. He admits that his decision may have been in haste as it doesn’t currently look like the WWE is going to pull the trigger on Reigns.

But when it comes to encompassing 150 years of pro wrestling history, you won’t be able to satisfy every reader. What Solomon has packed into 388 pages is commendable and beyond expectation.As far as wrestling is concerned, Solomon says he would love to write a memoir about his personal experiences with professional wrestling. He also continues to be a part of the Kevin Geeks Out series when the show is themed around pro wrestling.