I waited five years for that magical moment that every parent who is a wrestling fan dreams of. 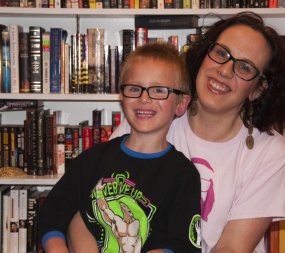 Liam and his mom Jamie. Photo by Martin Hemmings.

I will set the scene.

It was a Friday. My husband had been away for week one of a two-week military training course. It was just my son and I. And I was exhausted.

So I did what every desperate parent does to keep their sanity: I suggested we have a movie night. I would make the popcorn and he could pick the movie. I braced myself for the inevitable. My son always picks the Disney film, Cars 2.

I can recite it from memory and I just hate it. Hate it!!!

So my son scans our movie collection and then turns to me and says the most magical words I’ve ever heard him say: “Mom, can we watch WrestleMania?”

I immediately texted my husband and he responded that I shouldn’t be bribing our son just so I didn’t have to watch Cars 2. For the record, I didn’t bribe him. This was a completely unexpected request.

And I kind of have the WWE Network to thank for this. About a month or so ago, I became aware of the fact that our cable company was now featuring the WWE Network. We wouldn’t have the on-demand option, but we’d have the channel which included the original programming and pay-per-views. I pleaded my case that our family budget would benefit from getting the channel due to how much I would normally spend per year renting the pay-per-views. I won my case.

The questions were simple at first.

“He looks like Daddy.” (Full disclosure my husband is a ginger and he’s suggested that it is to my benefit to say he looks like Sheamus especially physique-wise.)

He then started remembering more and more of the wrestlers’ names. He took an interest in some old wrestling action figures I had. He commented that the George “The Animal” Steele one looked just like his Grandpa. (Sorry Dad!)

Along with Sheamus, he started to have other favorites including John Cena, Kofi Kingston, the Ultimate Warrior and The Big Show.

Then he noticed that a whole section of our DVD shelf has wrestling DVDs.

Which leads me to the magic moment. After I picked my jaw up off the floor and wiped my happy tears, I put on the most recent WrestleMania, which at that time was 30. (Yes I have all the WrestleManias!)

My son was completely captivated. He got excited for the good guys and cheered loudly. I told him that he had to put his thumbs down and say, “Boo!” for the bad guys. He gave me a funny look and asked, “Why do we want to scare them?” This led to a lengthy discussion about using the word, “boo.”

But we eventually got back to the matches and we had a great evening. While we didn’t make it to the main event, my son lasted through most of the show before I put him to bed. And with his limited attention span, I was quite proud of him.

After I left his bedroom, I couldn’t help but smile. It had been a long time since I had sat and watched wrestling with someone who liked wrestling. As a kid I watched it all the time with my Dad and my brother. But I grew older and moved away to attend journalism school and as a young adult, I didn’t have any friends that liked wrestling. And while I love my husband to death, he prefers comics, science and all things space, rather than the squared circle. So for the last several years, I would watch wrestling by myself.

I had the opportunity to think about this revelation when I was interviewing writer, Brian Solomon, about his new book, Pro Wrestling FAQ. Solomon told me that his two children were keen to help him out with the book. His son would help him with cataloguing photos, while his daughter assisted with transcribing interviews. Solomon even dedicated the book to his kids writing, “Just when I thought I was out, they pulled me back in.”

I couldn’t help but tell Solomon how my son was also showing an interest in wrestling and during this part of our conversation I concluded that due to my son’s interest, I was remembering what made me fall in love with wrestling in the first place as a young kid.

My love of wrestling has been steadfast, but I will admit sometimes it was a difficult relationship to keep up. There were storylines I was embarrassed about. There were rivalries that bored me. And sometimes I felt like I had seen it all before.

I was becoming jaded.

But then I saw how my son would light up when I’d let him come snuggle with me on the couch or in my bed so we could watch wrestling together. He would ask to wear his new John Cena t-shirt and I would put on my Macho Man shirt that my husband gave me one year for Valentine’s Day. (Yep he’s a keeper!) My son idolizes John Cena like I had idolized Hulk Hogan when I was a young kid. He makes shouts of amazement when Kofi Kingston would land a high-flying move, just as I had done when Jeff Hardy had done some death-defying leap years earlier. And I was so proud when he pointed out to me that the Russian Chain match between John Cena and Rusev at this year’s Extreme Rules pay-per-view was similar to a strap match we had watched a week earlier on DVD between Umaga and CM Punk. Yep he even remembered their names!

So the journey of another passionate wrestling fan has begun. We have come full circle.

As Solomon said, I was pulled back in.