Adam Ryder striving for excellence in ring and school

British Columbia has recently been blessed with a thriving independent wrestling scene. One of the brightest young wrestlers is Adam Ryder, who is regularly featured in All Star Wrestling. According to one retired veteran, Ryder is very athletic, innovative, and has a very good attitude, but can get lost in the crowd.

Vance Nevada, who called it quits after many years as a mainstay on the Western Canadian scene, gave a very well thought out opinion of Ryder’s potential. 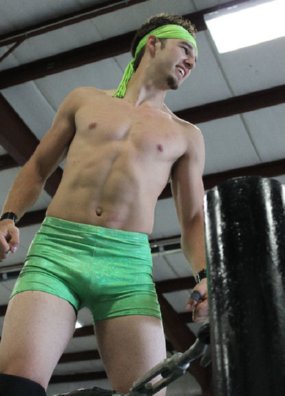 “I think the best thing about Ryder is that he’s a really bright guy that hasn’t put all of his eggs in the wrestling basket,” observed Nevada.

“He’s pursued an education and has made that his priority, which will serve him well both in and beyond this business. His weaknesses are that he’s too nice a guy — and maybe too humble for the wrestling business, so I think he may be overlooked often by his peers — the proof of which may be the time it has taken for the media to take notice of him alongside such flamboyant peers.”

Both Ryder and soon-to-be frequent foe Matt XStatic, the current All Star Wrestling Cruiserweight Champion, hope that they can both make an impression with their battles.

“Adam Ryder and myself are two hungry young bucks looking to erupt the independent circuit,” XStatic said. “Honestly, a feud with Adam Ryder would really elevate and raise the bar I think. If you have ever seen Ryder in the ring, his ring work is crisp as bacon and it will be a great learning experience being able to clash with him in the ring. I think Ryder and I could pull off several specialty matches, but TLC would be probably be the number one pick because it’s just one of those matches that just energizes the fans.”

One of Ryder’s best friends in wrestling, Kyle Sebastian, was equally complimentary.

“We have spent countless hours traveling the roads and there has never been a dull moment,” said Sebastian. “We have traveled across western Canada as a tag team and as rivals. Whenever I saw our names together on the card I knew it was going to be a fun night. He always pushes me in the ring.”

While the 6-foot-1, 196-pound Ryder only started his career in 2009, he has had the opportunity to work with a great many talented wrestlers, one of which was The Great Kasaki who he wrestled extensively in 2011 when they battled numerous times over the ASW Cruiserweight Title.

“I think The Great Kasaki is a fun worker,” recalled Ryder. “I remember back in 2011 when we first worked together in singles matches, I blew him up so bad I thought he was going to have a heart attack! But within the next few weeks, we ended working together another five or so times and he would come strutting to the back ready to go another round. We had a lot of chemistry in the ring and are able to change it up and provide a new match every time we work the crowd. He’s also one of the funniest guys you will ever meet.” 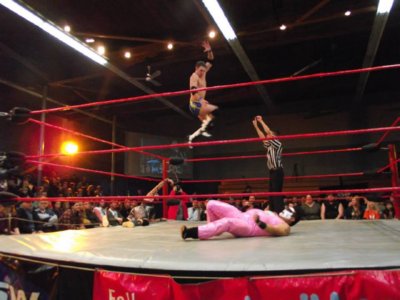 In order to prepare himself for try-outs down the road with some of the major wrestling promotions Ryder has been working on increasing his size.

“So when it comes time, there can be no reason for them to say no to me,” assessed Ryder. “Recently, I’ve place many short-term goals: gain weight, try a new move every match, things like that. As for long-term goals, I want a chance to work the guy who renewed my love for wrestling AJ Styles one-on-one. I want to travel to Japan to wrestle and learn as much as I can, and I want the chance to wrestle a [email protected]$# match for Pro Wrestling Guerrilla. Before I move on to any other long term goals, I want those ones to happen first.” 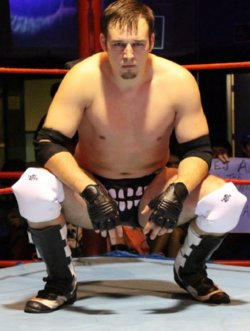 Ryder is ready for action.

Currently, Ryder is enrolled in university and is focused on getting his Bachelor of Business Administration in Marketing.

“So try-outs and traveling has become much harder so I’ve been staying around Vancouver and the Okanagan trying to get as much experience from anyone who comes to this territory,” explained Ryder.

One of those who have seen Ryder progress over the years is ASW owner Michelle Starr.

“He has grown from the ‘New Guy’ to a seasoned performer,” said Starr. “His work is intense and believable. He is the ultimate utility man and provides you with a great opener or an electrifying main event; definitely a valuable player on the ASW roster.”

That continuing desire to get experience, and learn as much as possible can be traced all the way back to Ryder’s childhood when he first started watching wrestling.

“I’ve been a wrestling fan for a lot of my childhood and I had originally watched wrestling from about ’98 — ’03 where I would rent every VHS tape of WWF or WCW that I could find for about 53 cents a day from my local video store in Smithers, BC,” reminisced Ryder.

“By the end of 2003, I had given up on wrestling, probably because I had seen every available VHS tape in my small town and everyone else started to say it wasn’t cool anymore. Then came the Summer of 2005 in Kitimat, British Columbia. I had just met a friend by the name of Jeremy Bokesch. After I met him, he introduced me to this up and coming company called Total Non-Stop Action and he started me off with a match between AJ Styles and Samoa Joe for what I think was the X-Cup. I just noticed the crowd was amazing with their chants of ‘Joe is going to kill you!’ and was nothing like I’d ever really seen. The wrestling was on a whole other level by comparison to WWE.”

His friend Bokesh later told Ryder he was planning on moving to Calgary, Alberta in order to be trained by former WWE and ECW star Lance Storm. While Ryder thought it was great for his friend he already had plans to enter college in Vancouver, British Columbia, but as luck would have it he met a local wrestler by the name of Daniel Huespe through another friend who wrestled for ECCW.

“I’d never even heard of indy wrestling until then and decided to attend the ECCW show,” said Ryder. “That night I watched the likes of Kyle O’Reilly, El Phantasmo, Vance Nevada, Michelle Starr, Scotty Mac and Sid Sylum all wrestle on the show and everything kind of clicked in my head and I said, ‘Yeah, I want to be a wrestler.'”

Shortly afterwards Ryder received basic professional wrestling training from Huespe and a year later walked through the door of Lance Storm’s Wrestling Academy. From Storm, Ryder learned all the basics of wrestling, and most importantly ring psychology, ring awareness and how to make a match entertaining.

“One of the best parts of training was Lance was very hands on in the ring as he would show you how to do a move the right way,” detailed Ryder. “Lance also had one of his former students, Carlo Cannon, work with us in the ring and I got to learn many valuable lessons from him as well. Lance also shared many valuable lessons outside of the ring, namely about longevity and how many wrestlers had followed darker paths and ended up in tough situations or in the worst case, death. He was a very honest guy about how your work was and what challenges you could expect after you were done at the Academy. I can safely say it was the hardest training of my life as on top of the training, I had to manage two late night jobs while going to a morning wrestling class and trying, and failing, to not get sick.” 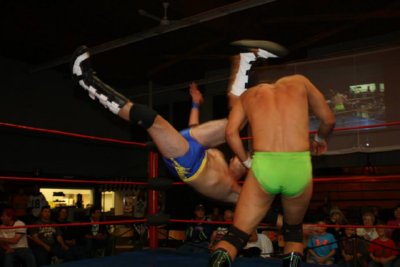 Adam Ryder is often off his feet in a bout, as Kyle Sebastian learns the hard way.

From there Ryder entered into a feeling out period throughout 2010 which led to his moving back to Prince George, British Columbia, where he started to travel with The Mauler to RCW shows just outside of Edmonton.

“Back then, The Mauler and I used to travel up and down the roads of BC and Alberta as we would drive the 16 hours round trip to Edmonton for a show one weekend, and drive 17 hours round trip to Vancouver the next,” remembered Ryder. “It was a hard way to wrestle, but I can safely say I learned an amazing amount from The Mauler in the two years I traveled with him and can say I wouldn’t have had any booking if it wasn’t for him helping me along the way.”

The year 2010 was also memorable for Ryder as it led to one of his favorite trips to Championship Wrestling in Hollywood, California which was run by David Marquez.

“Prior to this, I actually was training pretty hard and working an average of 12 hours a day before I went down,” said Ryder. “So before we even hit the road I ended up getting sick with the flu. As we went down the road, we’d switch on and off driving the 24-hour trip to Anaheim where afterwards, I worked a local televised tag match. We went to Denny’s afterwards and I ended up passing out in the booth.”

The following day Ryder and his compatriots ended up working a match for Alternative Wrestling Show, in one of the largest outdoor battle royals ever, which included over 159 participants spread out over three rings. Ryder vividly recalled that during the match one competitor got powerbombed into the side of a port-a-john; which they all found out soon afterwards had somebody in it that quickly scurried away to the cheers of the wrestlers behind the curtain.

“Next day, on a Sunday, we went to Venice Beach and saw all the beautiful sights and ended up sleeping on the beach overnight with some lovely locals,” reminisced Ryder.

“Thankfully we didn’t get rolled. During that week, we just got to train with Joey Ryan at their training center, walked on the Hollywood Walk of Fame, go see Disneyland and got to wrestle in Oceanside, Yuma, Arizona, and San Bernardino, California. I had the pleasure of wrestling The RockNes Monsters and right after that match did the 24-hour drive back home.” 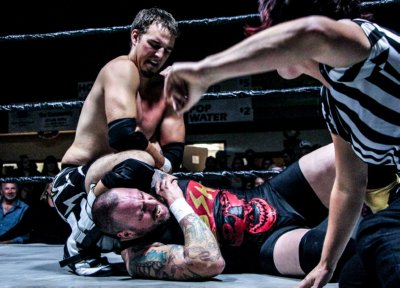 Looking to the future, in addition to what he hopes will be a series of matches against Matt XStatic, Ryder also has a couple of ECCW shows in April in Vernon and Kelowna, which will also be associated with Jeff Jarrett’s Global Force Wrestling.

“It should be a hell of a show,” exclaimed Ryder. “I’d also love to work with ECCW in the Vancouver area someday down the line and wrestling on the island for Vancouver Island Pro Wrestling would be a great experience. Both those promotions have some of the best workers in British Columbia today. I’ve been waiting for a chance for a one-on-one match with Artemis Spencer, but the opportunity hasn’t seemed to come up. I would love to do a tour of Japan and the U.S. one more time. Japan seems like a place I could gain a lot of training and experience to push myself further.”