The video starts with Carter telling Stratus that “Yoga is easy.” Through the course of the workout Carter finds out just how wrong he could be. Carter seems genuinely surprised that the yoga routine is challenging and soon the five time all-star is convinced that yoga can be tough. 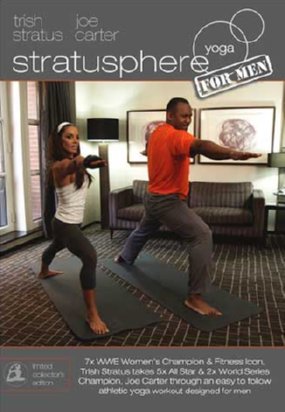 Stratusphere Yoga for Men is a fitness routine that lasts roughly 25 minutes, including a warm-up, the main exercise routine and cool down. The setting is an upscale hotel room where Stratus and Carter make use of everyday items such as towels, a couch and water bottles to pump up this workout. The hotel room highlights that you can use this workout anywhere. A person on a business trip or on a vacation could easily do this routine in close quarters. Stratus carefully instructs Joe and the viewer through the use of proper form and technique.

The routine has a good flow and Stratus’ enthusiasm for yoga is evident. Some of the moves will be familiar to those who purchased Stratus’ first video, Stratusphere Yoga. In comparison to her first offering, Stratusphere Yoga for Men has more power based moves with the intention of making it a more guy challenging workout. Planks, different squats and challenging push-ups highlight the powerful routine.

For two weeks, I faithfully used this video and I found it to be a nice switch in my workout routine. The upper body exercises were a highlight for me. I felt they were challenging and practical. I noticed a change in my chest and shoulders over the two weeks. Also, since I have been following Stratus’ yoga routines I have not had any back pain.

The video lacked the intense body part focus of her first DVD in favour of a quicker, full body workout. I found that I had to supplement my workout with sections from her first DVD, particularly with abdominal work. It wasn’t that the core was not worked in this video, but I just needed more.

The banter between Stratus and Carter started out as cute but quickly became a distraction. Carter tried to interject humour into the workout yet it became increasingly annoying as the workout progressed. The extras at the end of the workout are fun to watch on one occasion.

If I had another criticism of this DVD, it would be that for the retail price of $19.99, I felt I needed more. I wish the DVD had a second similar length routine of exercises that could focus on other body parts as I really enjoyed the diversity in her earlier DVD.

Overall I enjoyed the workout and eagerly looked forward to my exercise session with Trish and Joe.

Caleb Smith is moving on to his next two week challenge with Trish Stratus’ third DVD, Stratusphere Sculpt. He is not muscle bound, but is feeling more flexible than he has in years. His wife even mentioned that he’s looking more lean and defined.