Wrestlers love sharing stories about matches, pay-offs and crazy angles. Perhaps one of the things that get the men and women from the business most excited is talking about the worst conditions they have ever had to work under.

So, here’s a second go-round, since the stories just keep coming.

“We did about eight or nine weeks straight,” recalled Young. “The shows went great and the guys on the shows were great, but the ring this guy had was maybe the worst ring I’ve ever been in. It had regular carpet for foam and it smelled like mildew and underneath the ring was this huge pummel horse. That was there to brace the boards so the boards wouldn’t break. If you hit it too hard, or you took a hard bump this pummel horse would break your back into a hundred pieces.”

Even though the ring was terrible, looking back Young realizes that the tour empowered him to take his career further. “We were wrestling six nights a week at least and that was kinda my last thing because I had done a few try-outs with WWE and things were going really well for me,” said Young. “I went out there and there were five of us in this hotel room in Moncton and we were making just enough to eat and get by. That was like my last test; could I wrestle every day kinda thing? Do I have the durability to do that?”

The hard ring made him think twice about taking high risk moves, but sometimes you just have to do it. “I wrestled this guy who was 6’7″ and built like Sid Vicious and he would give me the last ride power bomb every night in this ring and it would just break my back,” said Young. “When I would wake up the next day I was ready to do it all over again. If anyone could wrestle in that ring they were doing something right.”

For former NWA World champion Dan Severn it is not the condition of the ring that has been the worst, but watching the condition of his peers. “Professional wrestling, I tell people have you ever seen the movie The Wrestler starring Mickey Rourke? It did not show bad conditions other than it showed a pretty sad ending of a wrestler,” said Severn. “I thought it was a great movie about the industry. The real odds of a wrestler making it to the big top are not a reality. It is not based on true athletic ability. It is political, it is corrupt, I could throw in a few other words that are distasteful.”

Severn tries to help mentor young people who are entering the sport of professional wrestling. “So I try to discourage young people who pursue me. I am a big advocator to have Plan A, B, and C. Just having Plan A is not good,” said Severn in earnest. “The same thing with cage fighters. I had a very interesting career and a very successful career in an industry that I would not want my own children getting into. I have never been in a fight my entire life. When people see what I do they say I am an animal. I say, ‘No I am a competitor. I understand rules and regulations. I will shake your hand before hand and I will shake your hand after. There are no hard feelings about what is about to come down the pipe there.'” 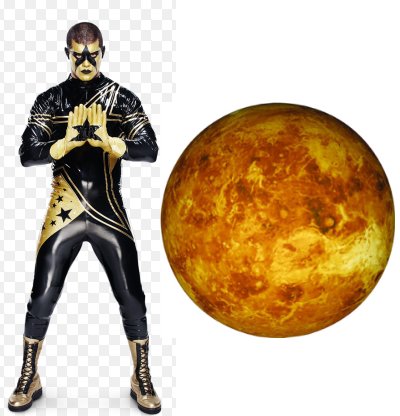 Next WWE tour … to Venus?

WWE superstar Stardust (Cody Rhodes) said that his worst conditions were not just in a ring, but a whole country. “The worst place was in Peru,” said the former tag team champion. “It wasn’t hospitable for wrestling. I’d rather wrestle a match on Venus than go back there again.”

Former WWE Intercontinental champion Rikishi experienced some ghastly conditions while working in Mexico as a young wrestler. “My worst condition, well the most shocking for me was early on in my career I used to go to Mexico,” said Rikishi. “I was booked out there with the late mighty Yokozuna, the late Owen Hart, the late Chris Benoit. So we come in to do two-week tours at a time. They would bring the Samoans in and our last day they would bring in Chris Benoit and Owen Hart.”

The company he kept was not a problem, but rather it was the environment. “My experience was the first time I was out there we were in this dressing room and when you are young you aren’t paying no mind and are just excited to be on this show,” Rikishi remembered. “We were in the dressing room and walked in, it smelled so bad, it smelled like bull crap. I looked around at all the other wrestlers and it was like normal to them so I thought maybe it was just the smell of where we at.”

Soon enough he realized something was amiss. “I was sitting there and all of a sudden I could see blood dripping. I looked up and I seen a bull head. They must have slashed him open and killed the poor thing,” said Rikishi. “We were actually dressing in a bull arena right there where we had all the bulls at; it was the weirdest thing. We were right by bull manure.”

Rikishi saw this event as a rite of passage or paying his dues in the wrestling business. “It was a lesson to be learned. I was a young kid and I thought this is the beginning of what wrestling is. I remember calling my uncle and said, ‘Man this is horrible.’ He said, ‘Smarten up, this is pro wrestling. Learn to adapt. Not every arena is beautiful. Just get out there and do your time and go take a shower at the hotel.’ After that there could be nothing worse than that. Every other arena was just sweet.”

The son of Rikishi, WWE superstar Jey Uso, had an experience that was similar to his father’s. “Texarkanas, Texas, because the arena they wrestled in had a dirt floor,” said Uso. A rodeo had been booked into the building on the day before and after the wrestling matches. “We had to wipe the dirt off our boots before entering the ring and the place still smelled like livestock.”

The livestock theme seems to be prevalent in professional wrestling. The wrestling textbook Tyson Dux also had a foul encounter in a barn. “Oh my God! The worst conditions I would have to say there was one time we wrestled in a barn!” exclaimed Dux. “It was an actual livestock arena. It smelled of cow manure the whole time and I’m a real OCD person and I don’t like dirt on me. I was completely filthy. I had a hardcore match with Tommy Dreamer. I was covered in all kinds of dirt and I don’t know what it was and it bothered me a lot.”

Matt Cross, who wrestles on Lucha Underground as Son of Havoc, also has his own Old MacDonald experience. “Oh man. I’ve wrestled almost everywhere and everything,” said Cross. “I’ve wrestled in barns where the ground was made of sawdust so anytime you went near it, it went in your eyeballs. There were a lot of kids that were throwing the sawdust at you.”

Player Uno from the Super Smash Brothers tag team recalled a time when he felt like he was baking. “The worst condition I would say one time in Connecticut,” said Uno. “The very first ISW show in the Unites States. Mainly because the backstage was some sort of outside kitchen and we were changing between ovens in the summer. It was like 50 degrees. It was the worst thing ever.”

His partner, Player Dos, recalled Mother Nature ruining one of their matches. “In the Warped Tour, it is a big concert, we had a wrestling event and especially that night it was raining and so we were behind a tent on ground, so it was muddy everywhere,” said Dos. “The wrestling ring was covered with a tarp which was full of water. It was a disaster.” 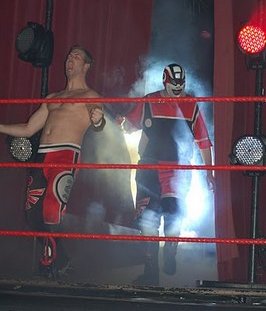 Perhaps one of the most interesting places to wrestle would be a prison. Matt Cross didn’t know what he was in for when he agreed to that booking. “I’ve wrestled in a maximum security prison which was very interesting,” said Cross. “I actually loved it, but I assumed it was for traffic offenders, but after the event I asked the warden who we had wrestled for and he said that there was minimum, medium security and then high risk. We were with the high risk guys, so there was literally cop killers, murderers, and I was glad I knew that after the show and not before or I would have acted quite differently. So that was a different/dangerous one.”

One wrestler who seems to look on the bright side of life is Johnny Gargano. Dragon Gate USA’s Open the Freedom Gate Champion hasn’t been to a wrestling event he hasn’t liked. “I haven’t had any horror stories, honestly,” said Gargano. “I hear a lot of them, but I haven’t had any of them. I think it’s just me. I am a person who will make the best of any situation. So I love wrestling and I appreciate people coming to watch us wrestle. So wherever that show is going to be I am going to get in the ring and do what I do. So it doesn’t really matter if it is in a crappy country or in a mud filled stadium, I am okay wrestling anywhere. That is the beauty of indy wrestling, it can be anywhere, anytime, so anything goes.”

Part of the fun of professional wrestling is the events and conditions that the wrestlers find themselves in. At the end of the day most of the ring warriors look back on their struggles with fondness and a good chuckle.

— with files from SLAM! Wrestling staff

What are the worst conditions you’ve wrestled in?