What are the worst conditions you’ve wrestled in?

Ask any wrestler about the worst conditions they ever wrestled under and they are bound to have more than a few stories to share. The experiences range from physical pain, to inclement weather, to ring conditions. Here are a few stories from wrestlers of the past and present. 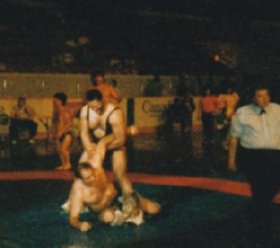 The Black Demon and Dominic Denucci try to wrestle in Kitchener in June 1988 when the ring did not arrive. Photo by Greg Oliver

While Mick Foley, in his groundbreaking book Have a Nice Day, described falling off of a scaffold in the Dallas territory as career-threatening and scary. Not to mention his famous Hell in the Cell match with The Undertaker where he was thrown off of the structure and onto the announce table below. He never said that these conditions were bad, perhaps not the best choices, but not bad. Which leads you to wonder what are bad conditions?

In his tome A Lion’s Tale, Chris Jericho recounted being in a match with Gedo and having the scare of a lifetime. “For some reason when I jumped up to wrap my legs around his neck, he gave me a double arm push to the chest,” recounted Jericho. “I didn’t get the leverage I needed as a result and when I swung my head backward, I didn’t clear the mat. I landed straight on top of my head.” In the end Jericho was fine but the match obviously haunted him as he is thankful that he narrowly escaped paralysis.

Ohio Valley Wrestling’s former champion Jamin Olivencia said the worst conditions he ever worked under was an injury he suffered in the ring. “It was an ACL tear. Each step I made felt like a glass that was cracked ready to break,” said Olivencia.

Weather can play havoc with an outdoor wrestling show. The promoter books the show hoping that the weather forecaster calls for clear conditions so the fans will fill the stands. Former TNA star Cody Deaner has had his run in with inclement weather. “I once wrestled in a downpour of rain in a big year long-feud blow off match. It was a steel cage,” recalled Deaner. “However, we had to walk through two-foot deep mud puddles to get to the ring because the ring was in the middle of a horse track. You were covered in mud before we even entered the ring. The ring was slippery, covered in mud … not to mention the fact it was a steel cage match on top of that! Not the best way to end a year-long feud.”

JJ Dillon, a long-time wrestler, manager of the Four Horsemen and executive, has had his share of weather-related misery. “Over a 20-plus year period, I had over 3,200 actual wrestling matches and countless appearances where I managed at ringside without wrestling myself,” recalled Dillon. “I don’t remember the date or location, but I recollect wrestling on an outdoor show where it started to pour rain near the end and it was a ‘show must go on’ situation. I remember that both sides in a tag match removed their leather boots and worked barefoot to keep from water soaking our gear. We survived the ordeal, but it was less than ideal circumstances.”

Multiple-time World champion Ric Flair shrugged when asked about working against the elements. “I used to wrestle outdoors a lot. I wrestled in rain storms on baseball fields. Walking to the ring in $500 wrestling boots on and there’s mud all over them,” said Flair with disgust. “Even in the late ’70s we were wrestling in ballparks. Lightning, thunder, rain, don’t care. The promoters didn’t care at all. They just wanted to get the last hour they could out of the town. That’s just what we did. I don’t look back on it as being a bad experience — it’s just something you did.”

The Killer Bees were a popular tag team in the WWE during the 1980s. Jim Brunzell and B. Brian Blair shared their water-soaked memories during the 2014 Niagara Falls Comic Con. “The strangest thing that happened to Brian and I was wrestling outdoors in Puerto Rico in Roberto Clemente Stadium,” said Brunzell. “It was raining so hard and it was on the TV show because Bobby Heenan and Gorilla Monsoon (were doing commentary). There was so much water in the ring.”

Blair was not thrilled with the conditions. “It was my first day back from having arthroscopic surgery on my knee. The ring was so slippery that it was like wrestling on oil.”

“It was horrible and we barely got off the island that night because it was just a monsoon; it was just horrible,” said Brunzell.

If it wasn’t the rain, perhaps freezing cold conditions might make you consider finding another profession. Dillon has had the pleasure of wrestling in Japan many times, but each trip to the ring wasn’t necessarily pleasurable. “I was on a couple of tours in Japan during January. It is very cold in Japan in January and most arenas are not heated. The fans still leave their shoes at the entrance and sit in their seats with their breath clearly visible due to the cold,” said Dillon. 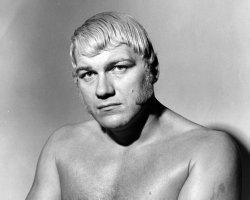 “We would dress in the hotel and wear a track suit and huddle around portable heaters in the dressing room until it was time for our match. We would shed our track suits and go to the ring. The mat would be cold and you would not break a sweat no matter how intense the match was. The fans came in spite of the cold and we endured the less than ideal conditions. I loved wrestling and visiting Japan. During the winter season the cold was a small price to pay for the privilege and honour to be invited to tour in Japan especially during the glory years when Baba and Inoki both had successful promotions running in the same era.”

Promoters play a big role in the wrestling industry; without them there wouldn’t be wrestling shows to enjoy and attend. Poor conditions can be created by ill will, poor equipment or terrible booking by the promoter. “Maverick” Matt Milan has had his ups and downs during his young wrestling career, but a few moments have really stuck with him.

“I think the worst conditions I have ever wrestled under were not the environments that I’ve wrestled in. That’s the fun in wrestling,” said Milan. “Those are the fun stories to tell. The worst conditions I have wrestled in, is where a promoter stiffs his guys on pay. They do it for whatever reason it may be. They didn’t sell enough tickets, they don’t kiss up, and that’s the worst condition you can ever wrestle under. I’ve wrestled at fairs in front of 10 people in Connecticut, while a bunch of other people would rather watch ‘Hot Dog Pig Races,’ but it’s a fun story that I like to share, but it will never be as bad as putting my body on the line, and helping make a promoter money, while receiving nothing in return.” 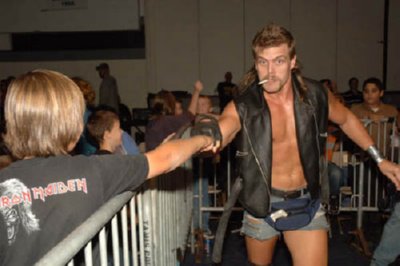 Cody Deaner heads to the ring in 2009. Photo by Mike Mastrandrea

Cody Deaner experienced a bizarre battle royal inside of a steel cage. “I once wrestled in a three-hour, 30-man, blindfolded battle royal. It was at an art festival. The promoter wanted us to go a full three hours,” said Deaner. “I was one of the guys that had to last the full three hours to direct traffic. The problem was, the blindfolds were supposed to be gimmicked. They weren’t. They were legit! Battle royals are dangerous enough. Try doing one in a steel cage … for three hours … with no eyes!”

Sometimes the rings are less than safe. In fact they can be downright dangerous. Jesse Scott, who has gone by the ring names J.T. Playa and Tiberious King, is a veteran of the Ontario wrestling scene. “Jace Fury and I wrestled Tyson Dux and Jack Damage in Toronto,” said Scott. “I’ll always remember that match because the ring was kinda wobbly and Jack Damage gave my partner a sidewalk slam and a board came up, just like a tectonic plate coming out of the Earth right in the ring.”

Deaner has been in his share of bad rings but nothing prepared him for what happened to him on one show. “I once wrestled on a show where the entire middle of the ring fell apart. The board came out entirely,” said Deaner. “I remember my opponent missed a spinning wheel kick. I turned around to get him and he was gone. He fell through the ‘sink hole’ in the middle of the ring and was just lying there at the bottom of this hole. I went over to see if he was okay. He just smiled up at me and said, ‘Hey!’ We laughed our asses off. It could have been so much worse. That’s what you get on the indies, man. Sometimes half the battle is just the deathtrap of a ring you’re working in.”

Jesse Scott had an experience with a ring on an East Coast tour of Canada that hurt and frightened him. “There is nothing worse than getting to a place and the ring is bad. Wrestling is an art and I want to be able to present it and when something stands in the way of that it drives me nuts,” said Scott. “I wrestled out east in the stiffest ring that I’ve ever been in in my life. They had a saw horse that was pressed up under the ring so it made sure the boards wouldn’t break but it was like wrestling on a floor.”

It wasn’t just the hard ring that bothered Scott but the elasticity of the ropes. “I was in this thing seven days a week and I’d hit the ropes and I’d go back and fight gravity to get off the ropes. It was almost to the point where you would hit the ropes and it would go ‘Boing!’ like a cartoon. You could see people and you were getting really close to them. They were going ‘Whoa!’ like I would fall into their lap.”

Former WWE tag team champions Demolition have had their share of interesting conditions to wrestle under. For Ax (Bill Eadie) and Smash (Barry Darsow) nothing compared to a night in Reno, Nevada. “The ring didn’t show up. We had to wrestle on the floor,” said Smash.

Ax chimed in about what lead to this situation. “There had been a snowstorm and they (ring crew) couldn’t get in. It was pretty bad.” In wrestling the show must go on so the promoter put ropes up around chairs and Demolition wrestled in a makeshift ring for their adoring fans.

Wrestlers from all generations have had some terrible conditions to wrestle in. The interesting part of this is that each one of these wrestlers tells their tale of woe with a smile and a twinkle in their eyes. These unfortunate events are all a part of paying your dues and growing in the wrestling business and they make for one interesting story.