Cornette’s trip Back to the Territories rowdy and fun

The shoot interview format has been around for 20 years, even if new materials and new stars will always be there, it is refreshing to see new ideas and fresh concepts — and Kayfabe Commentaries’ new outing is a fantastic idea. It’s called Back to the Territories.

The first first installment is hosted by Jim Cornette and features Hacksaw Jim Duggan and Mid-South Wrestling. It will only get better with time if this outing is any indication.

Right from the get go the use of Cornette memorabilia to illustrate the character and the geography of the territory set this series apart for any other on the market. In fact, I’d welcome even more visual aids, as it completely changes the experience from a regular shoot interview.

I know a lot about the territories, and Mid-South in particular, but even I learned a few things from their conversation and if you are a fan who wants to learn about the business, you’ll find this a fantastic addition to your collection. 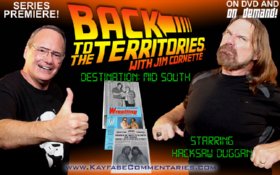 It’s just a great DVD to watch as two great personalities just reminisce about a great time and a great place in the history for the wrestling business. As both men get lost in their souvenirs, you suddenly realized that they dragged you along for the ride, right in the middle of a fantastic story.

Can we really imagine in 2014 what it was like to work seven to nine dates a week? Or even just a territory where you drew and made money as well?

Mid-South was an area where the product was taken so seriously that you had to fight with the audience; where the cops instead of protecting you would tell you not to cheat if you didn’t want trouble!

It all seems so quaint — each city got its television shows on what they called a bicycle loop of up to five weeks behind the timeline of the main city.

But it was big time too, and Mid-South ran the Super Dome in New Orleans, site of the most recent Wrestlemania, four times a year — and maintained a weekly presence in the city.

All inspiring wrestlers on the independent scene should watch this video. It’s an education that very few people can give them today.

Recently on the Steve Austin podcast, Vince McMahon said that Bill Watts, the man behind Mid-South, was the one territory owner he didn’t want to compete with during the national expansion of the early 1980s. Learn why. Cornette and Duggan will get you behind the scenes and tell you who that man was and what his expectations were from his talent.

While it is filled with information, the DVD has plenty of entertainment and funny stories as well, my favorite being the one where the local promoter at a flea market who would hold an auction during intermission selling everything from firearm to cupcakes. Things were different but they were good.

Jim Cornette is the perfect host for such a project with his incredible encyclopedic knowledge of the wrestling business and Jim Duggan is a great as the first guest, full of memories from the place where he first became a star. I can’t wait to see future installments in the series but in the meantime, Mid-South might just be as Jim Cornette said in closing: “The gold standard of what a successful wrestling business was supposed to be like back in the territories!”