“Jerry’s World” is about to become Wrestle World.

The WWE announced today that WrestleMania 32 will take place on April 3, 2016. It will be held at the AT&T Stadium in Arlington, Texas. 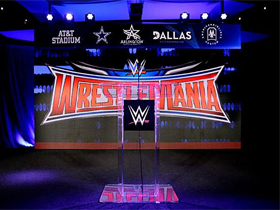 “This is my Graceland,” said Texas-native Mark Henry of the AT&T Stadium on the WWE Network. “I’ve been a fan but when I heard there was a chance that we would do WrestleMania in this stadium, it would have to be probably the last one for me; nothing will be better than that.”

When asked if many of his friends and family would be hitting him up for tickets to the show, Mark joked they had better look elsewhere.

“They are going to have to go and buy them,” Henry laughed. “I have two kids. I have mouths to feed.”

The AT&T Stadium is famous for its retractable roof and is the home of the NFL’s Dallas Cowboys. It is predicted that approximately 125,000 people will visit Arlington for the show.

The American Airlines Center will host the 2016 WWE Hall of Fame Induction Ceremony and the Monday Night Raw following WrestleMania 32. WrestleMania Axxess will be held at the Kay Bailey Hutchison Convention Center in Dallas.

“On behalf of the entire Dallas Cowboys organization, we’re excited to welcome WrestleMania 32 and fans from around the globe to AT&T Stadium,” Jones Anderson said.

Last year’s extravaganza at the Mercedes-Benz Superdome in New Orleans grossed $10.9 million and played to a sold-out crowd of 75,167. It is was the fifth highest attended Wrestlemania event of all time. WrestleMania 3 at the Pontiac Silverdome in 1987 still holds the record with 93,173 people. The AT&T Stadium’s current attendance record is for the 2010 NBA All-Star Game which drew 108,713 people which is why the WWE is predicting WrestleMania 32 has a good chance at breaking the attendance record set by WrestleMania 3.

One question that has been on the minds of fans has been cleared up. Wrestling icon Sting will assuredly be at the big show as he will have a Premium VIP autograph signing session on Saturday, March 28th at WrestleMania Axxess. It is rumoured that Sting will face Triple H at the event.

Last night, Sting made his first ever appearance on Raw distracting The Authority and their minions so that John Cena could score a pinfall to win back the jobs of supporters Dolph Ziggler, Erick Rowan and Ryback.