Sometimes you can find the greatest things by wandering around a used book store. You’ll walk through this old shop and casually browse the dusty shelves until a title jumps out at you. It could be a true hidden treasure, perhaps the first edition of classic novel written by one of the world’s greatest authors. Or it could be a horribly written piece of pulpy dreck, like the one I recently found called Bodysmasher. 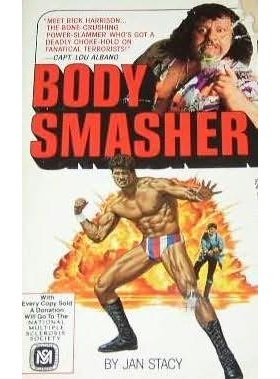 The plot of the book, which was written in 1989 by sci-fi author Jan Stacy, is about as implausible and ridiculous as you’ll ever see. In order to thwart terrorists who are going to set off a stolen atomic bomb at an international professional wrestling tournament in which all matches are “real,” the CIA recruits a former solider and, under the tutelage of legendary manager Captain Lou Albano, trains him to wrestle so that he can find the bomb under the cover of participating in the tournament. But wait, it gets even better.

For the first half of the book, the hero, Rick Harrison, doesn’t even know what the mission is. He just blindly agreed to join the CIA and undergo extensive training. Enter Captain Lou. The WWE legend is an actual character in the book, and is written very much like his brash TV personality, but amped up a notch. He’s gruff and oafish and, though patriotic — he’s a “captain” after all — seems as concerned about stuffing his face full of food as he is training the man who will be defending the free world from nuclear Armageddon. I can only speculate as to why Albano would allow himself to be depicted in this manner, and have come up with only two possibilities: either a) the cover of the book notes that a portion from each sale of the book was donated to the MS Society, so it’s possible he was doing it only to help boost the donations; b) the publishing company gave him a wheelbarrow full of cash.

I’ll assume it’s the former reason, just so I can say there’s at least one redeeming thing about this book. Seriously. It’s not even one of those cases where “it’s so bad it’s good.” This book is just bad. Here are some of the reasons why:

And so should you. Because Bodysmasher is a hidden treasure that deserves to stay buried.