Because of his comedic on-screen persona, it may be hard to believe that WWE superstar Santino Marella has a serious side. At least when it comes to talking about the Battle Arts Academy, the MMA/fitness/pro wrestling training facility that he owns. SLAM! Wrestling recently sat down with Marella to talk about the Battle Arts brand, which will be on full display this Saturday, when the company presents Battle Arts 5: The Test.

“It’s a new genre of professional wrestling,” Marella (real name Anthony Carelli) explained about the style of the matches that will be presented. “The Battle Arts style bridges the gap between Mixed Martial Arts and pro wrestling. It’s basically the original rules of pro wrestling — we don’t do pins, and we don’t do closed fists,” he explained. “It’s one of those things that’s so classic that it’s new again.” 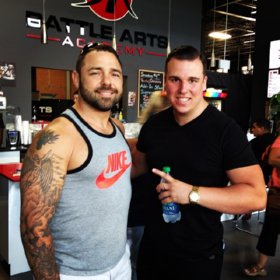 At his Battle Arts Academy, he’s Anthony Carelli and not Santino Marella; here he poses at the Academy with Hamilton comedian Eric Johnston, who is also the son of the late wrestler Bullwhip Danny Johnson, and his uncle, Randy, and grandfather, Bull Johnson, were wrestlers too. Courtesy Eric Johnston

Though Marella’s WWE fanbase may not be familiar with Battle Arts’ hybrid style, Marella notes that when they come to a show, they are quick to embrace it.

“Some of our pro wrestling fans come in, and it’s different from what they’re used to seeing on TV. They may come in and say, ‘I want to see guys fly off the top rope.’ But by the end, they’re having authentic reactions, they’re showing actual concern, and they’re really cheering.”

“As for the MMA fans, they come to our show and they’re blown away. With the growth of MMA, fans are becoming a lot more savvy. They know if you put on a guillotine, the person is in danger of losing. There is going to be an education, a learning curve with our genre. But if you look at the explosion of MMA, and the direction in which I believe pro wrestling is going, we’re on the leading edge.”

To help introduce fans to the style, the company has posted a match between George Terzis and Yuki Ishakawa online; a rematch between the two will be the main event on Saturday’s show.

“The first match was one of the best matches I’ve ever seen in my life,” Marella said.

The match demonstrates a mix of all of the core programs that Battle Arts Academy offers to its students: pro wrestling, MMA, strength and conditioning, and cardio, the medley of styles Marella refers to simply as the “Battle Arts style.” It’s a style that he hopes will soon become a household name in the combat sports and sports entertainment worlds.

“The more respected our brand becomes, the more of a resume that the athletes here will have. I want people to know that if (you trained here), you’re a battle-hardened fighter, that you know how to shoot, you can grapple, do kickboxing, jiu jitsu, boxing, and pro wrestling.”

That combination, he says, will help open the doors to success in the industry.

“If you’re not six-four and you’re not a former professional athlete, and a world-class one at that, you have very little chance to make it in this business,” he noted. “If you come here, though, you learn how to wrestle, and you learn how to fight. All of a sudden, you’ve got something that’s a little bit mysterious, a little bit unique, and that helps you make it.”

“I started out very late, and what helped me leapfrog (to the major league scene) was that my stuff was believable. Today, when it’s harder to get people to suspend their disbelief, you have to have authentic, organic, instinctual reactions in the ring to get people to say ‘this is real.’ To do that, you have to know how to fight for real. That’s the way I learned, and that’s what I want people to learn here. That’s why I put my heart and soul into Battle Arts.”

Though he’s quick to point out that it’s not just him that makes Battle Arts work. Indeed, he relegates himself to the backseat when giving accolades to his entire coaching staff.

“They’re all just super people to have around,” he praised. “We absolutely have the best trainers… a dream team. Tony Wallace for kettle bells — he’s amazing; Richard Gayle is at the forefront of the scientific aspect of strength conditioning; Triston Brookes is our cardio-kickboxing course, he’s a golden gloves winner; we have Sam Zakula, one of the pioneers of BJJ in the GTA; Steven Kuzminov, our kickboxing course, was a former Serbian national champion. And, of course, Yuki Ishikawa for MMA. I’m by no means the head coach — people are in better hands with (the others).”

But the vision of Battle Arts is very much Marella’s, and those visions are grand. They include not only events like Saturday’s pro wrestling show, but various events featuring the entire menu of disciplines that Battle Arts offers, all offered within the facility’s in-house Don Kolov Arena.z

“The arena is so flexible, that we can have just about any kind of event here,” he said proudly. “We’re having our first kickboxing exhibition here on February 21. On March 7, we’re having our first Ontario Boxing Association approved boxing match, we’re having the Battle Arts shows, and we’re also now doing jiu jitsu superfights, where some of the top fighters all over the area put on a card of high-level guys — like Metamoris shows that they run in L.A. We take down the ring, put the mats out, and add production — strobe lights and music and full introductions for the entrances. There’s nothing like it in the jiu jitsu community today. These are amateur athletes getting this professional platform where they can showcase their skills.”

“I built a wrestling studio as a place where our students can learn, and all of a sudden, we’re becoming an events centre. The hard part,” he half-joked, “is that I want us to be the best at everything.”

That’s a lofty goal, especially considering that Marella will be devoting more time now to his day job as a WWE performer. For the past few months, he’s been able to dedicate more time to Battle Arts as he recovered from neck surgery, including a second surgery late in the year.

“Three months ago, I had my first surgery, but two of the screws came out,” he explained. “So I had to go back and take out all the hardware. Luckily, over those three months, some of the bones had fused, so I don’t have to wear the plastic collar all around.”

Not being constrained by the neck brace will allow him to have more of an on-screen presence, including this week’s Royal Rumble feature that aired on the WWE Network.

“I’m going to talk with the writers and get back on the show in a non-physical role, whether it be a manager or General Manager, interviewing backstage, whatever it is.”

As to whether he’ll get back in the ring in the near future, Marella is less definite.

Nor will he dwell on what may or may not happen.

“Right now, I’m just focusing on overcoming the obstacle, rather than focusing on what an obstacle it has been. Sometimes when your life is going great, you can start running on cruise control, you start getting too comfortable, taking it easy. Then you get a challenge like this, and that’s what can be fun, doing what you have to do to meet — and beat — that challenge.” 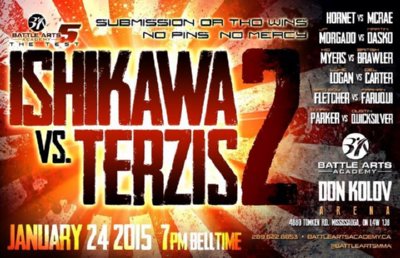 In terms of Battle Arts Academy, the challenge that Marella wants to meet is to continue its growth and success.

“I want to build on what we’re doing,” he said. “I want to be a fixture in the community for years to come. I want Battle Arts to be a place where kids can go and have really awesome mentors and learn to be awesome members of the community. I want Battle Arts to be synonymous with high level athleticism, competition, and production. I think if people check out (Saturday’s) show, they’ll see what I mean.”