What a great way to spend a rainy Saturday night; invite a few friends over, crack a few cold ones and relive our youth by viewing the latest wrestling documentary, Battles, Bouts and Brawls – The History of Wrestling in Detroit. Both of us started watching the great talent and attending the various promotions that have made Detroit one of the greatest wrestling cities on the face of the planet since the late 1950s. All our wrestling memories jam-packed into a 90-minute film. Well, so we thought.

Here is our take on the DVD as we discussed and debated the piece. 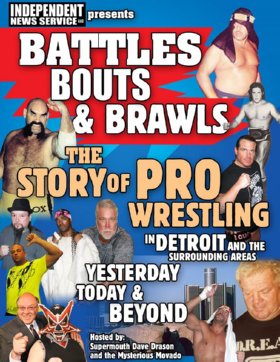 JOE BASTA: It started out on the right foot with historians Rob Bauer and Jim Mandl (RIP) taking you on a trip down memory lane with Leaping Larry Chene and other stars from the Olympia Stadium era. A few vintage audio clips of Wild Bull Curry, Pampero Firpo and Abdullah Farouk were classic relics of Detroit TV wrestling. From there, the filmmaker seemed to lose all direction, blending those who knew their history and had so much to offer with those who just didn’t belong.

FRANK PACE:Ten minutes in, I had no idea where this film was going. It had absolutely no flow or continuity. It was a mish-mash of short clips with little or no history being presented. It seemed to bounce all over the place and was very hard to follow. My biggest gripe is that nothing was said about the array of talent that came through the area over the years and made Detroit a wrestling hot bed. Fritz Von Erich, Jim Hady, Mark Lewin, Baron von Raschke, Sweet Daddy Siki, Fred Curry, Killer Brooks, and so many other greats never were mentioned. The tag teams like The Kangaroos, Hells Angels, The Outlaws, The Skull Brothers were passed over. The managers, Crybaby Cannon, Gary Hart, Ivan Kalmikoff, Eddie Creatchman received no mention. The promoters, Johnny Doyle, Jim Barnett, Burt Ruby, Hal Light, Mike Anthony, no mention. The fact that The Sheik bought the promotion in 1965 and put his father-in-law, Francis Fleser, as the figurehead promoter in charge never came up. The different promotions over time like All Star Wrestling, Motor City Wrestling, Michigan Championship Wrestling and all the independents that came after the demise of Big Time Wrestling were ignored. Nothing about any of the referees, the announcers, the various arenas throughout the city where it all took place. That’s the history I was hoping for but never received.

JOE BASTA: There were so many people featured throughout the movie, each given a brief amount of time to present their views and memories. On the positive side, the true historians who actually witnessed it all over the years and the few workers who lived it lent the most substance. Jim Lancaster, Ron Martinelli, Rudy Hill, Evan Ginzburg, Chris Carter, Gary Woranchak, Vinnie Scarboni, AT Huck, Mickey Doyle, Tom Burke and Dave Drason all spoke with passion and presented historical merit. Legendary villain Ox Baker was featured in a short segment but I didn’t really understand what he was trying to convey or what it had to do with wrestling in Detroit.

FRANK PACE: What I couldn’t understand is the overexposure of many local indie workers; most, if not all, came from the XICW promotion, which featured their own self-promotion. No credit was given to any of the promotions or workers who kept wrestling alive in the area when the national promotions came through once in a great while. Give me some Skull Ganz, Canadian Destroyer, Denny Kass and Al Snow.

JOE BASTA: What I didn’t get was the people who received face time but had no ties to this area, no less, never saw a match in our territory. They had absolutely nothing to offer. Most disturbing to me was some unknown describing The Legendary Sheik to a gal sitting next to him. As he was talking about his gimmick and wrestling style, she starts laughing and cackling like a hyena on laughing gas. How disrespectful in the name of the Noble One. Truly embarrassing and I question the historical content to the film.

FRANK PACE: I’m a big Mike Kelly fan but I think he may have had something better to offer the viewers than describing Road Warrior Hawk’s passion for visiting local strip clubs.

JOE BASTA: There was a couple clips with Greg Valentine and Kevin Nash, filmed at some kind of fan gathering, that were very hard to hear because of all the background noise. That aside, whatever they had to say for easily forgettable.

FRANK PACE: I did love many of the posters, clippings and advertisements that brought back great memories. The thing that puzzled me was the overall quality of photos that were used in the presentation. They looked like bad fan photos taken from a ringside seat. A vast amount of them were blurry, fuzzy and full of dust marks that made it near impossible to discern who was actually in the picture. (Editor, there is a thing called PhotoShop!) I recognized many of the publicity photos that appeared in magazines and the Body Press program but they were few and far between. It made the overall appearance of the film hastily put together and very low budget.

JOE BASTA: To say nothing of the low-quality wrestling clips, most notably a group of front row fans sitting motionless and uninterested in the action in the ring.

FRANK PACE: I’m left scratching my head as to what I had just watched. Some good, most bad.

JOE BASTA: In my opinion, I really didn’t see much historical content over the 90 minutes presented. I really enjoyed the filmmaker’s previous documentary about The Sheik. I think fans could far better learn more about the history of wrestling in Detroit by going to kayfabememories.com and reading the various posts in the Detroit section. Much better to let the historians tell the story, who I believe had much more to offer, but their tales were silenced and left on the editing floor.

FRANK PACE: If you are of fan of Detroit wrestling, I believe your hard-earned dollars will be much better spent somewhere else. Sorry to say, thumbs down.

Frank Pace and Joe Basta are both retired Chrylser auto workers who at one time worked in the same plant as Ricky “The Crusher” Cortez. They feel like kids again any time they can watch or read anything old school wrestling.