TORONTO — That Jay Briscoe has a way of throwing things off. Here I was going to write about how the local boys, and one gal, made the Ring of Honor All Star Extravaganza VI so enjoyable for me, he goes and upsets Michael Elgin for the ROH World title.

It wasn’t quite Ivan Koloff shocking Bruno Sammartino and ending a lengthy reign, but there is no doubt that the title change surprised the rowdy crowd at Toronto’s Mattamy Athletic Centre, the venue formerly known as Maple Leaf Gardens. In part, this is because Elgin has wrestled in Toronto countless times, and is a hometown boy from Oshawa, Ontario, just a hop, skip and a jump east on the 401. 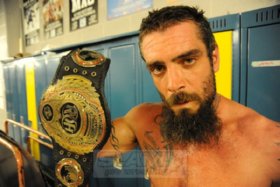 Jay Briscoe is once again the Ring of Honor World champion. Photos by Mike Mastrandrea

There was a definite moment of stunned silence after Elgin lost, the victim of a second Jay Driller — and the first had been through a table outside the ring — though during the bout itself, there were duelling chants for each warrior. Then there were some boos and confusion.

The crowd also didn’t know what to make of the new/old champion Jay Briscoe, who had had the title stripped away from him in July 2013, as he was unable to defend because of a shoulder injury. After the referee presented him with the belt he sort of cockily went over to shake Elgin’s hand. The crowd seemed to want Elgin to clock Briscoe, but instead he snatched the title belt away, looked at it longingly, and turned to put it around Briscoe’s waist. So ends Elgin’s 76-day title reign.

As momentous as the championship bout was, it wasn’t the best match of the night.

That honor absolutely went to Adam Cole facing off with A.J. Styles.

It’s here that I’ll note that I brought a long-time mainstream wrestling fan to the show who knew next to nothing about ROH, and Styles was the sole name that he really knew.

Cole and Styles put on a clinic, with a match that had logic, drama, selling and excitement. It was a match that could have been in Maple Leaf Gardens 30 years ago in many ways. And, if I’m being honest, I hadn’t seen that in Cole in previous appearances, but here, he had it together, has learned to slow down and milk the crowd. He’s also learned how to recover from a botched move or two, as he did with a failed figure-four leglock around the ring post; the second time he put it on, this time properly, he bowed to the ringside fans afterwards.

And Styles is still Phenomenal, of course, and is the reigning IWGP World champion in New Japan, a championship that probably trumps the ROH World belt on an international scale. 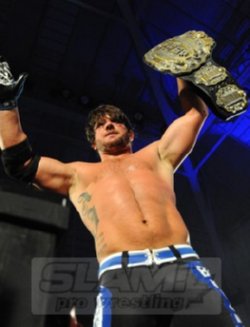 That there were times that Cole came THIS CLOSE to winning is a testament to Styles’ selling. It really was a great match, and I want a rematch, even though the right man, Styles, won.

The main event of the evening was actually a two-out-of-three falls bouts for the ROH World Tag Team Championship, with the champs, reDRagon (Bobby Fish & Kyle O’Reilly) prevailing over The Young Bucks (Nick & Matt Jackson).

While totally predictable with the heels winning the first fall, and the Bucks evening things up before ultimately losing — O’Reilly trapped Nick in a triangle choke while Fish and Matt fought outside the ring — the action itself was typically unpredictable and wild. Good stuff, high-impact and all that, but to me, it paled in comparison to the actual “wrestling” matches already described. Props to O’Reilly, a good Canadian lad from British Columbia, for the use of a hockey stick as a weapon; we don’t see that often enough.

Going back to my original lead, kudos definitely need to go out to three southern Ontario names that stood out — leaving out Elgin, who lives in St. Louis now.

Toronto’s Seleziya Sparx is a part of the House of Truth, and came to the ring alongside cult leader Truth Martini and the ROH TV champion Jay Lethal. She not only ate an accidental superkick from Lethal to set up the match for later in the show between the champ and Cedric Alexander, she probably was slandered the most of anybody on the event, as Alexander alleged that she had a bigger set of balls between her legs than Lethal. During the bout itself, won by the champ, Sparx again got in the way, and was crushed, and I mean crushed, in the corner; she sold it like a champ, laying lifeless forever.

The other local boys that made me proud were Josh Alexander and Ethan Gabriel Owens, who competed in a Four Corner Survival Match with three other teams: BJ Whitmer & Adam Page; Caprice Coleman & Watanabe; and RD Evans & Moose. They fit right in, never missed a beat, and delivered as much punishment as they dished out. In the end, though, it was all about making Moose Ojinnaka look strong. Mission accomplished. He really is something, and size-wise, it’s like watching an NFL player toying with Pop Warner kids. He and Evans won, and by his reaction, you would have thought that Evans had won the Super Bowl. 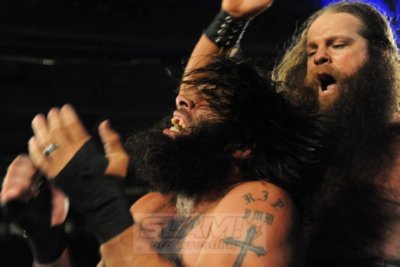 Beards collide in the opening bout between Mark Briscoe and Hanson.

The rest of the show was good too, if not quite as memorable: Mark Briscoe beat Hanson in the opener, Christopher Daniels and Frankie Kazarian beat The Decade’s Roderick Strong & Jimmy Jacobs, and Mike Bennett and Maria Kanellis cut a promo.

On the iPPV, a lot bigger deal will have been made about Tommaso Ciampa. He showed up at one point to apologize to announcer Bobby Cruise for attacking him at a previous show, only to have his microphone cut off by commissioner Nigel McGuinnness. Then he showed up right at the end of the shows and destroyed the Young Bucks, storming off through the crowd that was already dispersing and heading out the exits.

Live, it’s worth mentioning that ROH doesn’t exactly do a great job explaining storylines to fans, like my newbie buddy. It’s little things. Like when Cedric Alexander came out to challenge Jay Lethal, at no point was Alexander’s name ever spoken; even if Lethal or Martini don’t say it, Alexander should work it in somehow, like “Cedric Alexander will be the next TV champion.”

Similarly, the Tommaso Ciampa loose cannon saga is interesting, but it was completely lost and confusing for many in attendance I am sure.

Ring of Honor announced a return to Toronto for next May 2015, with shows on Friday and Saturday nights at the Ted Reeve Arena in the city’s east end.