BRAMPTON, Ont. — Because of its significant South Asian population, Canada Day celebrations in Brampton, Ontario have a very unique flavour. One of the main ingredients in that flavour is TigerFest, the annual event put on by the legendary Tiger Jeet Singh and his son Tiger Ali Singh, that perfectly blends the glamour of Bollywood and the spectacle of professional wrestling.

This year’s event, a fundraiser for the Osler Foundation’s Etobicoke General Hospital, Brampton Civic Hospital, and Peel Memorial Hospital, was an unqualified success, with several thousand fans in attendance to see some of wrestling’s biggest names square off in a hardcore war. 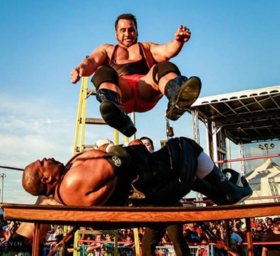 The wrestling card was the capper of a full-day celebration of South Asian culture, including performances by a troupe of Bollywood dancers, a magician, and famed Indian singer Deep Jandu. But as exciting as the build-up was, it was clear, judging from the raucous and rowdy crowd, that they were there for the in-ring action. And the show delivered in spades.

The main event in particular. That match started off as a 2-out-of-3, no-DQ, no-countout hardcore brawl between Tiger Ali Singh and TNA star Rhino. The action was hard-hitting until Singh was attacked by Rhino’s Foreign Invasion Squad of Steve Corino and the “Sudanese Butcher” Soa Amin, along with Tyson Dux who had earlier renounced his Canadian citizenship in favour of the USA. Singh had some backup of his own, however, in the form of former TNA superstar Sonjay Dutt and Davey Boy Smith Jr. (formerly, WWE’s David Hart Smith), and after some back and forth, the match was changed to a 6-man match (with Dux taking on a managerial role for his team) and an additional stipulation that allowed pinfalls to be counted anywhere.

No longer confined to the ring, all of the combatants took full advantage, as bodies started to fly everywhere, and the action spilled to the floor. As some of them started unloading on each other with chairs and garbage cans, Tiger exchanged blows with Steve Corino, taking the fight into the crowd. There, Singh was able to over-power Corino and with his rabid fans counting along, Tiger earned the first pinfall. The match returned to the ring, and Tiger’s team was well in control. But just when it looked like his team was going to get the sweep, Smith shockingly backstabbed Tiger, tagging in, only to then smash him in the head with a garbage can and allowing their opponents to even things up. Smith tried to justify his actions by saying he was fed up with being “Tiger’s second” and decided to join up with Corino’s crew. Tiger and Sonjay were undaunted, though, and agreed to a 4-on-2 battle for the third fall. The fight got even wilder then, with even more chair and garbage can smashes being dealt all around. Ultimately, Dutt and Tiger were able to power through the pain and take out their opponents one by one. In the end, as chants of “Tiger! Tiger!” filled the air, Tiger Ali Singh climbed a ladder which had been brought out earlier, and leapt from the top to put the Butcher through a table in the centre of the ring to get the pin for his team.

After the show, a beat-up Tiger shared his thoughts about the evolution of the annual event.

“A few years ago when we started this, we were looking to have a little fun. To put on an event without any politics, just a show that people could enjoy and that could raise some money for a good cause. By God’s grace,” Tiger Ali Singh reflected, “it’s grown into a major event and an annual tradition. In addition to the fundraising efforts, it’s also a platform to promote youth to stay away from drugs, and a celebration of unity among the rich diversity we have living in Canada.”

“Yes, my father is the namesake. But it’s the collected effort of all the guys and girls, the superstars on the show — their commitment to the cause, their hard work — that makes this such a great event each and every time. I’m glad we can continue the tradition, and I’m looking forward to how we can do things even bigger next time.”

2. The match between Mooglie and Tomer Shalom went to no contest when the Foreign Invasion Squad ran in and beat up both men.

4. The Bollywood Boyz, introduced to the ring by Tiger Jeet Singh, triumphed in their TigerFest debut against the “Dirty Southener” John Greed and the “Cyborg” Tyson Dux. After the match, the Foreign Invasion Squad attacked the Boyz, triple-powerbombing one while the other got put through a table. Tiger Ali Singh came in for the save, but the numbers game caught up to him, and Rhino hit him with the GORE! to put him through a table.

Bob Kapur is still undecided whether he would fit better with Rhino’s Foreign Invasion Squad or with Tiger Ali Singh’s heroes. E-mail him your thoughts at [email protected].