LAS VEGAS — Chris Kelly never made it to Africa in her lifetime. But now a part of her will always be there.

Kelly, the wife of Gulf Coast wrestling legend Cowboy Bob Kelly died Oct. 26. A fixture at the annual Cauliflower Alley Club reunion, she spent years appealing to CAC board member Jason Sanderson to take her to Africa so she could bolster his missionary work there. 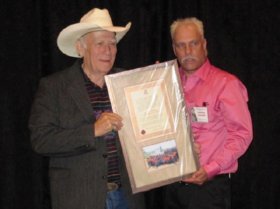 Cowboy Bob Kelly and Morgan Dollar with the information about the Chris Kelly Orphanage and School. Photos by Steve Johnson

Too dangerous, replied Sanderson, a bishop in the Liberal Catholic Church, whose ministry includes a Kenyan orphanage for children who lost their parents to AIDS.

On Tuesday, Sanderson said that the orphanage, which has grown from six children in 2004 to 30 today, is now the Chris Kelly Orphanage and School.

“This is the most unexpected thing that I’ve ever seen,” said Kelly, choking back tears as he acknowledged the dedication during the club’s annual Baloney Blowout function. “Believe me, folks. Chris is in Africa right now. She’s there with the kids and she’s looking after the kids.”

The proclamation was one of several heart-tugging moments at the blowout, the first of two nights of award presentations at the club’s 49th reunion.

Club officials formally disclosed a leadership change to take place next April after the 50th reunion. Nick Bockwinkel will step down as president, a position he has held since 2007. The 80-year-old Bockwinkel will give way to B. Brian Blair, best known for his work in WWE as one-half of the Killer Bees tag team.

“The hardest thing to open is a closed mind, and one thing I assure you is I have a very open mind,” said Blair, a former county commissioner in the Tampa, Fla. area. He credited Bockwinkel for his service and said he will work hard to expand the base of the 1,000-member non-profit.

Referring to the club’s benevolent activities, Blair said, “What the CAC does is the greatest thing in the wrestling industry, in my opinion … helping those who need help.”

Morgan Dollar (Teddy Speas), a North Carolina-based referee, will become executive vice president, replacing Karl Lauer after next April’s event. Lauer’s involvement with the club goes back to 1979 and he has been the point man for most of its activities. Dollar asked participants at the baloney bash to work with him “as we meet new challenges with new ideas.”

While Blair and Dollar were emotional in talking about their new responsibilities, there were not a lot of dry eyes as Kelly rose from his table in the front of the room at the Gold Coast Hotel and Casino to honor the memory of his late wife.

Sanderson could not be present because of increased religious duties, but Dollar was his voice, reading a letter Sanderson authored.

“Chris Kelly was one of the remarkable women that can not only hold a family together through the demands of this crazy wrestling business, but can also provide comfort, encouragement and support for others as well,” the letter said.

“Her lifelong dream was always to go to Africa, someday and always wanted me to take her. However, her health and the situations in the places that I went, prevented this dream from becoming a reality,” Sanderson said. Chris Kelly spent 40 days in the hospital, including 28 days in intensive care, following a 2004 heart attack.

Sanderson noted that respective clergy and the Kenyan government were on board with the naming honor.

Ironically, Kelly almost didn’t make it to Las Vegas this year. It took some gentle prodding by veteran Georgia referees Bobby Simmons and Charlie Smith to convince him to attend.

“I never went anywhere the last 40 years without her,” said Kelly, a long-time CAC board member and head of the annual Gulf Coast Wrestling Reunion in Mobile, Ala.

“Jason loved Chris. Chris was always talking to him about going to Africa, and she kept saying, ‘Jason’s going to take me there one of these days.’ And I said, ‘Aw, honey, he ain’t going to take you to Africa,'” Kelly told the audience. “I was married to her for 55 years and I loved every single minute of it.”

Several wrestling participants also were cited at the Baloney Blowout.

John Arthur Lowe, a transplanted Indianan now living in southern California, received the Red Bastien Friendship Award. Lowe, a playwright and IT consultant, spoke about his diagnosis of Hepatitis C and how he had tried to educate participants in the wrestling business about how easily the disease can be spread.

Tennessee stars Beau and Misty James won men’s and women’s wrestling awards; they’re synonymous with the wrestling scene in and around Kingsport, Tenn.

Santana Garrett, best recognized as TNA Knockout Brittany, took the Future Legends award, and Jesse Hernandez, a wrestler, trainer and head of the California-based Empire Wrestling Federation, received the Golden Ear award. That goes to an honoree who has worked in multiple roles and under multiple guises during a career.

Sean “Massive Damage” Dunster was recipient of the Jason Sanderson Humanitarian Award. Dunster has worked in western Canada on teenage drug awareness, visiting classrooms and hospitals on behalf of the “Fight for Life” program.