Cowboy Bob Kelly might just be the absolute nicest person I’ve ever met in almost three decades writing about professional wrestling. Naturally, there’s a tendency to eulogize when someone like Kelly passes, but I know I would have said the same thing if you’d asked me a week ago when he was still with us.

A lot of people feel the same way, and I can’t pretend to understand the pain that others who were closer to him are going through. But I can say that the Cowboy ALWAYS made time for me, for my writing partners Steve Johnson and Mike Mooneyham, heck, he had time for just about anyone. 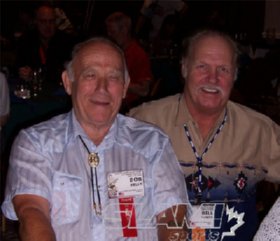 There are tons of memories I’ll cherish from Bob, and most of them centre around the Cauliflower Alley Club reunions in Las Vegas, where he was a regular and a board member. He’d be hanging out at the check-in table, or near the t-shirts, usually with his wife, Chris, who as hard as it may be to believe, was actually even nicer than Bob. And he’d have his cowboy hat on, of course.

He had time for everybody, happy to chat about just about anything. As the years went by, he seemed more and more content just to be there, to be amongst friends and fans, and required less by the board to be a part of things.

After all, he ran his own reunion, the Gulf Coast Wrestlers Reunion, which was an invite-only deal meant only for those in the closed business of professional wrestling and a select few others.

One of my biggest regrets is not being able to make it to a Gulf Coast reunion despite being invited by Bob. The invitation itself meant a ton, actually, that he was willing to let me into the inner sanctuary.

But then again, he already had.

Looking back through my files, our correspondence and interviews go back to 2004, but I know I met him before that at the CAC.

My first-ever trip to the reunion was in 2001, and I had my new bride, Meredith, along for the banquet. At that point, I considered myself a pretty knowledgeable wrestling writer, if not quite a historian at that point. Yet I was out of my league at our table — we were seated with a bunch of guys that I had never heard of! I was only vaguely aware of the Gulf Coast wrestling territory, centred in Mobile, Alabama, and here I was with the likes of Jim White, Bill Bowman, Jim Starr. Though the Kellys weren’t at the table (to the best of my memory!) they would have fit in well, as I knew nothing of his career either.

Through Bob Kelly and the Internet, I learned a lot more about the Gulf Coast territory in the subsequent years too.

For Kelly, I was a conduit of sorts to his very early days in the business, working as a referee in the summer for the Kasaboskis in northern Ontario. For one, I put him in touch with Duncan McTavish, who he knew from way back when. I don’t remember if I was the one who introduced him to the late writer Gary Howard or not, but Gary was the expert on the Kasaboskis — his book The Rassler From Renfrew is a gem — and he and the Cowboy discussed many, many memories through the years. He often asked me about some names from those formative years, and he lined me up with more than one of them, like Doug Kinslow, who again, may not be an “A lister” in the wrestling world, but people like Doug played an important role at a certain date and time.

When we conceived the idea of The Pro Wrestling Hall of Fame: Heroes & Icons, Cowboy Bob Kelly was certainly always on the list. However, Steve Johnson and I had our new tag team partner Mike Mooneyham write up that biography as we had become too close to Bob through the years, and didn’t necessarily feel that we could write it as objectively as we could have. (Mike being Mike, his piece was a couple of thousand words too long, but that also spoke volumes to how forthcoming and open Kelly was about his career.)

The other thing that stood out with Cowboy Bob was how public he was. When other wrestlers were technically illiterate or had hired other people to run their online presence, there was Bob posting answers to questions on newsboards or emailing people around the world. An email from Bob complimenting a story I’d written was something to be cherished.

Last year, when his wife Chris passed, I expressed my condolences. [See In praise of the wrestling wives.] Circumstances prevented me from attending the Cauliflower Alley Club reunion this past June, but from all reports, it sounded like one of the most emotional events ever when Bob was presented with details of an orphanage in Africa that would be named after Chris Kelly.

Now it’s our turn to be emotional, his many friends turning out their own memories of Cowboy Bob Kelly. Neither the Gulf Coast Wrestlers Reunion or the Cauliflower Alley Club will be the same without him.