Mat Matters: In praise of the wrestling wives

My phone book for wrestlers is filled with little notations, including real or worked names, or how to address someone — after all, it is weird to call someone “Killer.” But the most important notes are the names of the wives. They are the key. 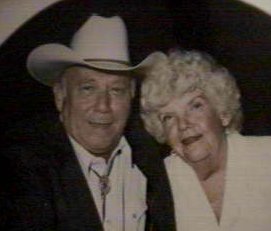 Bob and Chris Kelly were married for 55 years.

With the recent passing of a few special wives — Chris Kelly, bride to “Cowboy” Bob Kelly for 55 years; Debi, wife to Bobby Simmons; Ann, the wife of Sweet Daddy Siki; and Joyce Farhat, who was married to The Sheik, I was reflecting on wrestling relationships.

One line that has always stuck with me was from Norma Snip, bride of the late Billy Red Lyons. I called up one time when I had heard that Billy Red had passed, and that time it wasn’t true. She could only chuckle, “Telephone, telegraph, tell-a-wrestler. They are the worst gossips in the world!”

I have gotten to know a few of the wrestler wives over the years.

When I had my first book launch, in 2003, for The Pro Wrestling Hall of Fame: The Canadians, I was having a hard time getting Angelo Mosca on the phone or committing to attending the party at Big Anthony’s restaurant in Niagara Falls. But when I got his wife, Helen, on the phone, she vowed, “He’ll be there,” more of a direct order than a promise. When Mosca’s book came out in 2011, I finally got to meet Helen in person and told her that story.

As great as it has been getting to know Don Leo Jonathan over the years, it was an aside from his wife, Rose, that has stuck with me — when Don was home, he was a human jungle gym for their kids.

And Killer Kowalski finally got married for the first time in June 2006, marrying Theresa Dodd at St. Theresa’s Church in North Reading, Massachusetts. I asked the life-long bachelor later that year what made him marry. “Well, she told me, she’s 76-years-old, and she says, ‘I’m pregnant.’ I said, ‘Wow.’ She said, ‘You’d better marry me.’ I said, ‘I will, I will, I will.’ That’s why I got married.” Theirs was a sweet relationship, and Theresa took care of Killer until his last breath. And then, months later, she took it upon herself to call people that meant a lot to Walter, just to say that he thought highly of them. That was a special call to receive, for sure.

The fact is that wrestling wives put up with a lot. If the marriage has lasted throughout the wrestling career, it is a very notable accomplishment. There’s all the time away from home, the travel and moves, the temptations and vices, the bumps and bruises, the new territory every year. 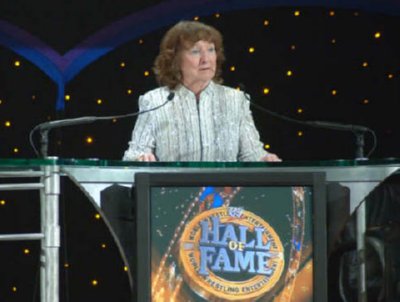 Joyce Farhat, widow of The Sheik, at the WWE Hall of Fame induction ceremony in Detroit in 2007. Photo by Mike Mastrandrea

It is probably an over-generalization, but the really, really normal wrestlers that I have met through the years, like Rick Martel or Tito Santana, have been married forever. That meant that they didn’t party quite as hard as the other wrestlers, or had other ideas in mind, squirrelling away their earnings for another day.

With Martel, I remember how much my respect factor for him went up when I learned how he and his wife, Johanne, waited until his wrestling days were done before starting a family; their daughter, Coralie, was eight months old when they both went to China to bring her home.

Recently, I was privileged to attend another reunion of old-time wrestlers in Burlington, Ontario. We raised a glass to Knobby McDonald, who had died earlier in the week, at the age of 86. But there was talk of families too, like Paige Sutherland talking about her late father, Kurt von Hess, and talking with “The Wolfman” Willie Farkus about his late wife.

I brought along John Dolin, the wonderful director of the Wrestling With The Past documentaries on The Comedy Network years back, and told him what a tight-knit the group of old-timers were, supporting each other in times of need.

At one Christmas luncheon, it was revealed that Carol, the wife of Reggie Love (Johnny Evans), had just died. After lunch, as a group — including Ron Logue in his Santa Claus suit — we descended on the funeral home for the visitation.

For those of you know have been fortunate to know Rotten Reggie through the years, you will agree that he is rarely at a loss for words. But he was that day.

During this Christmas season, on behalf of all fans, thank you to the wrestling wives.