Vivian St. John, who died on December 20th, was a complicated woman: a wrestler, a single mother, a fortune teller, and author on omens, curses and superstitions. Not long before she passed away, she gifted a special bracelet that had been given to her by her trainer, the Fabulous Moolah, that said: “Well-behaved women rarely make history.”

Whether people knew her as Vivian St. John or Lady Suzanne Miller, it was pretty spot on.

There was nothing strange to Vivian’s life, said her only daughter, Nicole, even though her chosen careers (and her religion, Luciferian) were far from the mainstream. 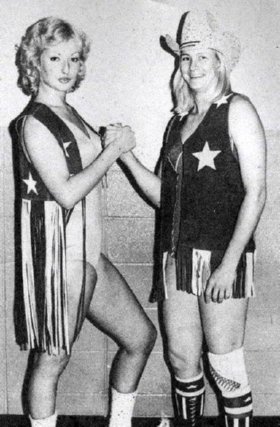 “If you knew her, it was just very much her,” said Nicole Miller. “She was a very eccentric person all the way around, however you cut the cake. Nothing really added shock value when it came to her.”

Suzanne Miller was born in Cincinnati, Ohio, in 1950.

In an interview with Christopher Annino at getitwrighthere.com, St. John talked about getting into pro wrestling.

“When I was young, I saw Sue Green wrestle and felt that it was something I could do. I loved wrestling. I loved wrestlers,” she said. “Harley Race gave me Moolah’s phone number so I could train with her, I paid Moolah $300.00 and she trained me. The first year I got my ass kicked.”

Susan “Tex” Green ended up being one of St. John’s trainers at the estate of Lillian Ellison, a.k.a. Fabulous Moolah, in Columbia, South Carolina.

Another was Joyce Grable (Betty Murphy), who recalled those early days teaching the wrestling skills to the newcomer.

“She learned pretty quickly. She had a great heart,” said Grable, noting her height. “She was pretty well six-feet tall, and I was 5’6″, so when I would wrestle her, there was such a big difference in it.”

Vivian St. John started wrestling in 1974, and competed right up until she got pregnant with Nicole. After that, wrestling was only occasional, up until 1986. Probably the most visible of her roles came in the movie, Mother, Juggs and Speed. Like most of the women wrestlers in Moolah’s stable, St. John worked just about everywhere. Women during the 1970s were a “special attraction” and rarely stayed in one territory more than a few weeks at most.

Beverly Shade was on a tour of Japan with St. John in 1979, along with Natasha The Hatchet Lady, Tracey Richards and Princess Jasmine. “She was a character. We had the best time with her. She was a heck of a good worker,” said Shade. “She was a neat girl. She started out with Moolah, and I never did. I worked for Moolah once in a while when she needed an extra girl or something. But she didn’t train me, so I wasn’t bound to her like those girls were.”

While Moolah may have her detractors, especially for the money she made off her trainees, booking them across the world, she did foster a real sisterhood.

The proof is Leilani Kai, who moved into Vivian’s home for the last months of her life, taking care of her old friend, who had heart troubles and was hooked up to an oxygen tank, confined to her bedroom.

It was Leilani who discoved Vivian dead in her Fort Lauderdale, Florida, room, only a couple of days after getting released from the hospital.

She is still in shock over the discovery.

“I found her facedown … and I was just gone 20 minutes outside,” recalled Kai. “She went to sleep and I took my beeper and went out the door she was fine two hours before that.”

It will be difficult to overcome the trauma, said Kai. “I’m like a zombie and I feel like my body is a noodle I just will never get over seeing her the last time like she was.”

One of the people who shared in the caretaking was Tatevik Hunanyan, Lelani Kai’s protege who wrestles as Tatevik the Gamer.

“Leilani took good care of Vivian,” said Hunanyan. “Vivian and Lani were like sisters, that’s the kind of relationship that I saw from a distance. They would fight, they would make up, they would take care of each other. There was just a lot of love.”

Kai confirmed that: “She was good to me but we had our times of disagreement also … I will always remember her as long as I live as a true friend.”

The closeness came from the years in Moolah’s gym and then on the road, Kai said. “We all trained at Moolah’s. We worked one another and lived on the same place — kind of a family circle.”

St. John’s family begins and ends with Nicole, whose father was wrestler Ron Starr. Nicole has two children of her own, a girl and a boy, that were the apple of grandma’s eye. “Vivian loved her grandkids. Oh my God, her grandkids were everything,” recalled Hunanyan. During her hospital stays, the photos of the grandkids would be in the bed with her.

Nicole, now a nurse in Florida, shared what her mother meant to her.

“She was an amazing mother. She was there for me,” said Nicole, who didn’t meet her father until she was an adult. “It was just her and I, and she was amazing. She did everything that you could ask for from a single mother. I’m really thankful for her.” 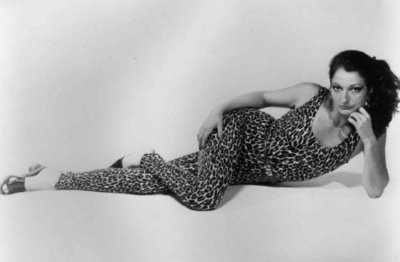 “Rotten” Ron Starr, a veteran of decades of wrestling wars, recalled St. John as well. They met at the Omni in Atlanta.

“She was tall and lanky. Everybody used to call her ‘Stretch.’ Everybody seemed to like her pretty well as far as showing respect for what she could do in the ring,” said Starr. He helped her get booked into Puerto Rico. “The girl she was working against was four-foot-nothing, and Vivian just towered over her.”

Starr said that St. John started to really get into the occult and astrology while they were a couple. She later studied at the New York School of Occult Arts and Sciences, and became Lady Suzanne Miller, a fortune teller.

“Yeah, she was, but I don’t want to say too much about that,” he said. “She did write a book on it one time, or about it, and she was into it pretty darn heavy, and could do things, if I told you about it, you would never believe them.” 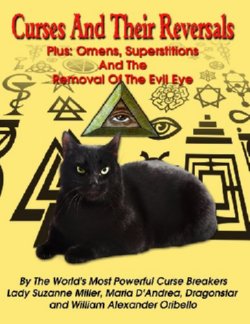 The book was called Curses And Their Reversals – Plus: Omens, Superstitions And The Removal Of The Evil Eye, and it was co-written with Maria D’Andrea, Dragonstar and William Alexander Oribello.

“What gives you the right to think you are so unlucky?” reads some of the promotional hype for it. “Does it have anything at all to do with the fact that the cards never come up the right suit; that the dice always fall where they may (which is not how you placed your bet); or that the beer guzzling, chain smoker down the hall has won the Pick Six three weeks in a row?”

Hunanyan, who was the recipient of Vivian St. John’s bracelet from Moolah, said that the occult and astrology were just part of her friend’s life. “She was very spiritual. You walked into her room, and she had all these magical crystal balls.” In fact, the biggest of the crystal balls — the size of a bowling ball — broke just before she died.

Her daughter is making plans to celebrate Vivian’s life.

“Obviously she wouldn’t want a traditional priest burial type of thing,” said Nicole Miller, who will see her mother cremated. She plans to have a chain made with some ashes, and she also hopes to spread some in New York City’s Madison Square Garden. “Wrestling in Madison Square Garden was one of the things she always talked about.”