When SLAM! Wrestling last reviewed a National Wrestling Alliance DVD there were some production issues. So the great question when it came time to watch the NWA’s Invasion DVD is whether or not there would be improvements in that area while still maintaining the high quality of wrestling in the ring. 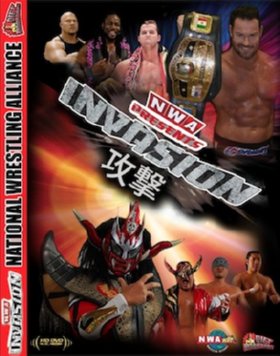 The NWA Invasion event was held on October 18, 2013 at the Humble Civic Center in Houston, Texas. The DVD starts with both the Japan and United States national anthems, which is something you don’t tend to see featured much anymore. The opening graphics next appear and again they are greatly improved. Unfortunately, the annoying commercials in between the matches are still present, but mercifully they are kept fairly brief.

For the DVD Matt Topolski is the play-by-play commentator and does another excellent job bringing to life not only the action in the ring, but the story behind the matches.

A great example is the opening bout on the DVD. Topolski very efficiently explains that the match is a mentor, Lou Marconi, versus, the student, Raymond Rowe, as well as, explaining that the heckler seated at ringside is suspended wrestler Jasper Davis, who would end up affecting the ultimate outcome of the contest.

The match itself started very slowly with some power moves and the two wrestlers feeling each other out. As the bout wore on the two would resort to some hard elbow shots, fisticuffs, shoulder blocks and chops.

The end of the match would come when Jasper Davis jumped the railing and distracted Rowe so that Marconi could get the win and retain his championship by hitting Rowe with his own finishing maneuver The Death Sentence. Overall the match was very low energy and it was really only Topolski’s work on commentary that managed to make it interesting.

For the second contest, before the bell even had a chance to ring all four competitors immediately started brawling. However, The Lords of Chaos retreated outside the ring until order was restored. Once the match formally started Erikson and Claxton exchanged some heavy shots, until Erikson was able to tag in Damien Wayne. After that point, Claxton and Reigns double-teamed Damien Wayne for quite some time with Wayne absorbing a great deal of punishment. However, after a while Wayne was able to turn the tables and he and his partner Erikson were able to double-team Reigns.

One of the more impressive moments in the match came when Wayne executed a Standing Suplex on Reigns and later on when Claxton hit a thunderous Scoop Slam on Erikson. Alas, just as the match was getting interesting both teams started brawling outside the ring which resulted in a double count out to the great dissatisfaction of the crowd.

While it took some time for the stalling to stop once it did the third match was a lot of fun. Despite the language difference both Gedo and Watanabe were able to effectively tell a story not only through their wrestling holds, but their facial expressions. Gedo particularly was able to rile up the crowd and made for a great heel.

During the early portion of the contest, The Kingz of the Underground were clearly the aggressors, but eventually the momentum shifted and Gedo and Watanabe were able to take the advantage and show some of their technical skill. Both Gedo and Watanabe utilized various submission holds on Ryan Genesis in an attempt to wear him down. Eventually, Genesis was able to tag in Scot Summers and the two of them demonstrated some effective double-team maneuvers on their opponents.

Surprisingly, though, Gedo and Watanabe got the win when Gedo hit a low blow on Scot Summers and Watanabe hit a Back Suplex on him.

The fourth match was marred somewhat due to Jax Dane being attacked by Byron Wilcott just as Dane was standing on the apron about to enter the ring.

While, Dane managed to withstand the early assault by Tarver and deliver some great moves such as a Spinebuster and a Spear, eventually the outside interference by Wilcott proved to be too much and Tarver would get the win.

Both Owens and Kincaid utilized some great arm drags and reversals to start the NWA Junior Heavyweight title bout. Afterwards, Kincaid was able to hit a great Back Body Drop and tried to use a submission hold on Chase to get the win, but the challenger was able to get to the ropes. From there both used a lot of reversals with both men vying for the advantage, until the action spilled outside where Kincaid hit a Suicide Dive on Chase.

During the match Chase hit a number of Double Ax Handles from the top rope that was obviously an homage to Randy Savage. Next, Chase hit a Double Knee maneuver on Kincaid which was extremely impressive. Kincaid also had some eye-popping moments such as when he hit a Diving Elbow from the top rope on Chase that resulted in him going outside the ring afterwards.

For the NWA Tag Team Championship Match, The Killer Elite Squad were the heels, but the reaction they received from the crowd was somewhat mixed. Regardless, the match itself was a wonderful illustration of what makes tag team wrestling special. In a lot of ways it’s hard to put into words what made this match so memorable, but the pacing, the storytelling, the characters, the various impressive maneuvers utilized by both teams were certainly part of what made it so good overall.

There were also some interesting facets with regards to this match. For example, while Liger is known around the world for his offense, a component of his skillset that is underestimated sometimes is how well he is able to sell to the crowd and that was definitely on full display during this match. It was, also, obvious how much fun all four men were having and that added to the overall quality of the match.

Even, though, The Killer Elite Squad hit their Killer Bomb for the win ultimately it didn’t really matter who won because the quality of the bout was so high. Hopefully a 2-out-of-3-falls rematch will happen one day which will give both teams even more time in the ring to tell a story.

Even though the match was no disqualification, and no count out, thankfully it didn’t result in the contest simply becoming a brawl. Instead the action outside of the ring involved a combination of brawling and wrestling holds which was somewhat reminiscent of WWE Championship matches from the late 1990s.

Another element which added to the enjoyment of the match was Wilcott’s humorous character moments. As well, Wilcott had some great chemistry with Conway that become more and more apparent as the match continued to build.

Towards the end of the bout Michael Tarver came to ringside and helped Wilcott double-team Conway for some time until Jax Dane made the save.

After Dane eliminated Tarver, Conway was able to hit The Ego Trip for the win to cap off the night.

Overall, NWA’s Invasion DVD shows improvement with their production values, while still showcasing some great action and it is recommended viewing for those looking for two and half hours of professional wrestling to watch over the holidays.